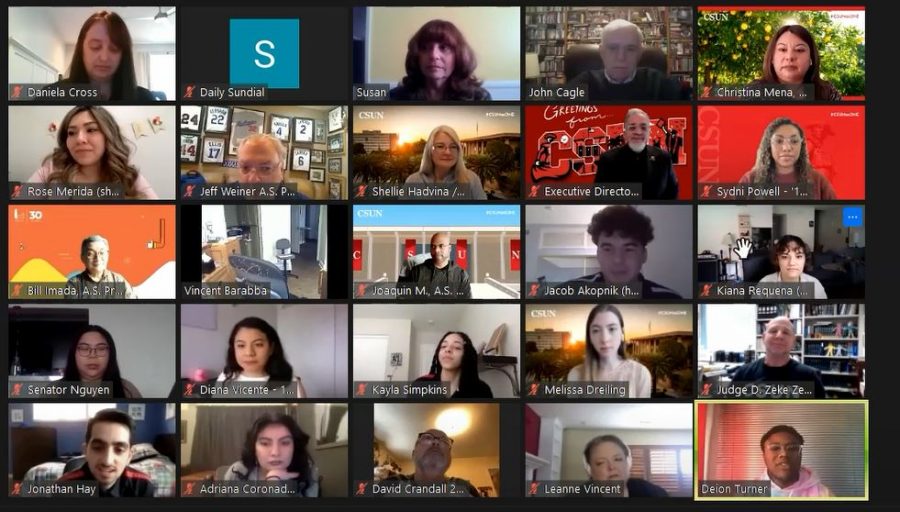 Past and present AS leaders come together to honor 66 years of leadership.

The Associated Students honored past presidents and brought current senate members and alumni together to reflect on CSUN’s legacy and future.

As a part of Monday’s meeting, AS leaders organized a President’s Day event where AS senators and cabinet members networked with alumni who shared their past experiences and discussed the challenges they used to advocate for as AS leaders.

The event, which usually includes an in-person welcome reception, roundtable discussions, a Tradition of the Rose Ceremony and a campus tour, was held virtually this year.

After introductions concluded, CSUN President Erika D. Beck dropped into the meeting to welcome the group and thanked them for their service and continual support of CSUN.

“As former and current leaders, you represent the best of what we have to offer our students and bring such an important sense of history and continuity,” Beck said. “I can only imagine what the conversations are like, as you reflect on your own legacy and contributions as you’ve watched the campus continue to grow and mature since your time as an active student.”

Alumni joined Zoom breakout rooms with current student leaders, where they shared perspectives and advice. They discussed the core principles of leadership, how to better serve the campus community and how to navigate life after college.

Susan Ettinger, AS president from 1981-82, was the first woman elected to the AS presidency. She said throughout her term many campus administrators did not know how to handle a female leader of the student body.

“The pressure on me was that if I messed up something, women would be blamed. Not that ‘Susan messed up,’ but that “Women can’t do the job,”” Ettinger said.

Ettinger said that she spent a lot of time building relationships across campus while engaging in meaningful conversations and offered current cabinet members a piece of advice.

“You will run into obstacles within AS and within the university, but if you come to the table with information, data, with facts and with respect, then you will get that back,” Ettinger said.

William Watkins, CSUN’s vice president of Student Affairs, discussed the challenges of being elected as the first African American AS president from 1973-74.

Watkins said that because there were not enough African American students attending CSUN in the 70s, he couldn’t rely on just their vote. He had to strategize how to connect to the student body through shared interests in order to appeal to them.

“You had to try to find ways in which to build a community of folk with a common interest to support your candidacy,” Watkins said. “That was clearly an inescapable hurdle to get over, and I am glad we were able to do it.”

Judge D. Zeke Zeidler, AS president from 1984-85, is CSUN’s first openly gay student body president and the first openly gay judge elected to the Los Angeles County Superior Court in 2005. He said that during his year as AS president, the issues that he worked on were considered progressive for the time. Zeidler said some of the issues the senate tackled include addressing the apartheid issues in South Africa, declaring sanctuary for Central American refugees, and hosting a western states lesbian and gay student conference.

“There’s a lot going on in the world, and students have always been at the forefront of all of it,” Zeidler said. “The impact that students have is pretty amazing.”

While Zeidler’s term focused on many external issues affecting the world at the time, he said the AS Senate didn’t lose sight of the needs of the student body. He also added that his work with AS legislation allowed him to gain skills that he would later use to pursue law, become an advocate and run for office as superior court judge.

David Crandall, who served as the AS general manager from 2000-18 and executive director from 2018-2019, recalled a statement that he shared with the AS Senate years ago that still resonates today.

“I’m delighted to be a part of an organization where people can tell each other uncomfortable truths, and other people can hear those,” Crandall said. “These days, when we’re little boxes on screens, that ability is more important than ever.”

The event ended with the Tradition of the Rose Ceremony, where the group offered a rose to the Matador statue on campus to celebrate the achievements at CSUN. Since the event was online, some members gave out a virtual rose instead. Leanne Vincent, AS manager of Student Leadership and Productions, put a virtual rose down to honor 66 years of AS presidents.

“I think [the rose ceremony] is really emblematic of the change that all of you bring when you pass through Associated Students,” Vincent said. “You really do things that make a difference, and that leaves something behind.”