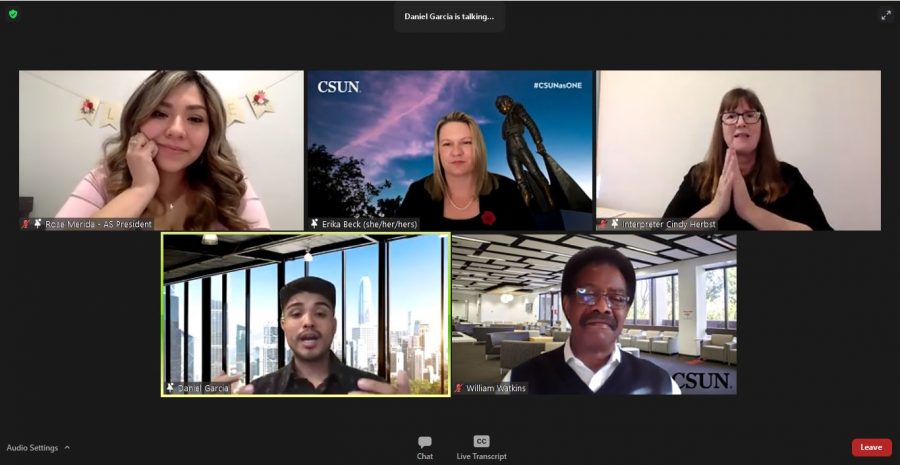 Daniel Garcia, a graduate student, discusses the need for a diverse faculty at CSUN with President Erika. D Beck during the virtual event “An Afternoon with President Beck” on Monday, Feb. 15, 2021.

“An Afternoon with President Beck” put the newly appointed campus leader face-to-face with students who shared their insights, experiences and advocated for faculty diversity Monday afternoon.

Associated Students president Rose Merida moderated the event, which involved Erika D. Beck discussing her early thoughts on leading CSUN, answering questions from students, and listening to the experience of students who shared their personal stories of attending the university.

Beck, who is currently on a 100-day listening tour, reflected on the past five weeks as campus president. She has met with dozens of faculty, staff, alumni and community leaders along the way. She said her conversations have been productive and she looks forward to connecting with more of CSUN’s community soon.

What are students saying?
Student feedback was mixed between praises and criticism.

Several students called on the new administration to diversify faculty to reflect the current student population it serves.

Graduate student Daniel Garcia and founder of Colored Minds, a student-led organization that seeks to diversify faculty at CSUN, shared with Beck that both of them have a few things in common. He said while they are both University of California San Diego alumni with a background in psychology, they differ in stark ways.

Garcia said that he was homeless for a few years while attending UCSD, but grit and determination got him through the rough patch. Garcia, who is Latinx, also added that he never had a psychology professor that looked like him during his undergraduate studies.

“As a matter of fact, I never had a single psychology professor of color,” Garcia said. “They were all white.”

Garcia said that he doesn’t want others to go through the same experience and feelings of disempowerment.

“Because the lecturers are white and the people mopping the floors and in the dining hall are brown or people of color,” Garcia said. “Students of color need to see themselves reflected in the professors to make the future seem relevant to the present.”

CSUN was ranked second in the nation by The Wall Street Journal as one of the top colleges in the west for diversity.

Colored Minds recently started a petition demanding that CSUN expand its tenured faculty’s diversity. The petition has garnered more than 1,000 signatures. According to the petition, the College of Engineering and Computer Science, and the College of Business and Economics, have the least number of diverse faculty members.

Garcia asked Beck to consider adopting a program that would recruit individuals from marginalized backgrounds to teach at the colleges where there currently is a lack of diversity.

At the end of Garcia’s speaking time, Beck applauded him for his compelling passion.

“We will work through this, but very well-done and thank you for that,” Beck said.

Recent graduate Ivan Salínas, 22, shared his experience as a student of color surrounded by faculty that lacks diversity. He said that as an undocumented student majoring in English, his experiences at CSUN were directly affected by the professors that taught him. Salínas said that the one Latinx professor in the English department became his mentor and has been supportive of his academic journey.

“When students say that ethnic studies save lives, what we mean is that professors of color are changing our lives because what they are teaching intersects with research and activism in the same marginalized communities that their students come from,” Salinas said.

Naurice Minor, a producer with AS, said that CSUN should expand and develop programs that allow students to speak about their lived experiences to help unify communities.

Minor spoke about Colorful Conversations, an event that AS put on last semester where students showcased both positive and negative experiences. He said that this helped foster a sense of unity and diversity, but in order to be successful the program would need to expand.

In between the pleas for staff diversity, several students shared what they believed are the best parts of CSUN.

Peter Balvuena, a psychology major, shared his experience as a former foster youth and a first-generation college student at CSUN. He told Beck that he would not be where he is today without the peers, mentors and advisors at Educational Opportunity Programs at CSUN.

Jason Nakhla, the president of Tau Beta Pi’s California Kappa chapter, an honor society that recognizes excellence among engineering scholars, said that the best part of CSUN is the student-led organizations. He said these clubs offer priceless resources and opportunities to students.

“And you get to make life-long friendships even with members who have already graduated and who will help you later on in life,” Nakhla said.

Beck spent most of the event listening and did not reply directly to each student, but instead thanked them for their insight and reflections.

What do students want to know?
President Beck was able to answer a few questions from students. The key takeaways were Beck’s views on student success and quality of education.

Beck said that student success is achieved once the student realizes their educational aspirations and overall potential, and it is the role of the university to help students reach this goal.

Advancing student success, specifically eliminating the equity gap, will be Beck’s highest priority and the core of what she hopes to accomplish as a leader.

“In my view, academic excellence is inextricably linked to inclusive excellence, so our commitment to justice and the imperative of establishing a thriving anti-racist academic community is of the utmost importance,” Beck said.

Beck said that a quality education provides opportunities for immersive experiences and hands-on learning like research projects and creative activities that allow students to think about the world around them critically.

“I believe in the value of education as a driver of social change and economic vitality,” Beck added.

At the end of the hour-long event, Beck shared her final thoughts of appreciation.

“I first want to thank everyone for your direct and thoughtful, courageous, well-informed and well-articulated perspectives. It just is so incredibly helpful to me,” Beck said. “I want you to know that I heard what you said, and this is not the last time that we will be having dialogue and discussion.”

Beck said that conversations along the tour would serve as a guide as the university moves forward with her as its president. After the conclusion of her listening tour, she will report her findings back to the campus and develop a plan moving forward.

William Watkins, vice president of Student Affairs, thanked President Beck for taking the time to hear from students and hopes that the feedback can be translated into action.

“I thought this was a tremendous afternoon of sharing, and I want to extend my appreciation for the real heartfelt expressions of those things in particular that you think that Cal State Northridge can do to improve your experience here,” Watkins said. “There’s several of us listening, I guarantee you.”