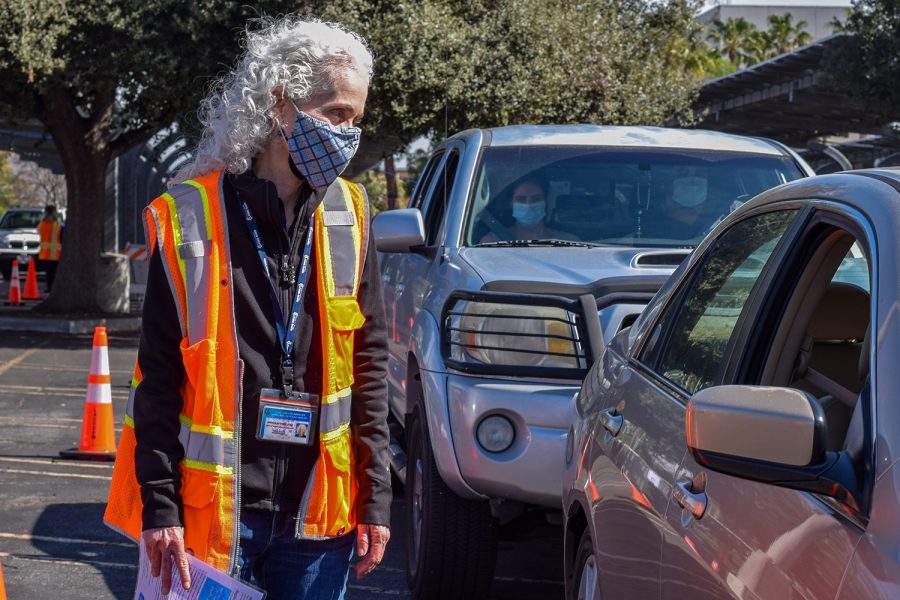 Barbara Ferrer, director of the Los Angeles County Department of Public Health, speaks to patients who received the COVID-19 vaccine at the CSUN distribution site on Saturday, Feb. 13, 2021.

The COVID-19 vaccination site at CSUN is now only offering second doses due to vaccine shortages.

The site was visited by Los Angeles County Department of Public Health Director Barbara Ferrer on Saturday, where she answered questions about the shortages and disparities regarding vaccination numbers among Black and Latinx communities in Los Angeles.

The daily number of vaccines administered at CSUN fluctuates, but Ferrer said that it usually tops 2,000 per day.

However, Ferrer explained that CSUN’s site specifically has a capacity much higher than that and it could “easily run at 4,000” per day and “could expand to 6,000” if there were enough doses available.

CSUN is one of L.A. County’s seven mega-PODs, or mass points of distribution, for vaccination. All seven county mass vaccination sites are now only offering second doses due to shortages.

Vaccination sites run by the city have taken an even bigger blow, with Dodger Stadium and others temporarily closing last week due to shortages. The sites reopened on Feb. 16.

Ferrer expressed cautious optimism about getting more vaccines and hopes that a new one-dose vaccine will ease the vaccination process.

“We have a new partner in President Biden, I know that will make things a lot better. He’s buying up more vaccines with Johnson & Johnson that hopefully gets approved by the FDA after clinical review,” said Ferrer. “That’s a one-shot vaccine, that’ll certainly be a lot easier … I’m very optimistic that we will get more, but right now we’re sort of in a scarcity situation.”

The vaccines currently administered at CSUN are from Pfizer. According to Pfizer’s clinical trials, their vaccines have an efficacy rate of 52% after the first dose and 95% after the second.

However, health officials are still stressing the importance of wearing a mask and practicing social distancing even after receiving their second dose.

“Even after receiving your second vaccine, it can take up to two weeks to build an immunity of about 95%,” said Manuel Martinez, a spokesperson for the L.A. County Fire Department. “It’s 95%, it’s not 100% … you still have a 5% chance of catching COVID.”

Martinez also noted that those who have received their first vaccine can show up 21 days after their first dose without an appointment as long as they bring their vaccination card to the same site at the same time of their first appointment.

The CSUN site began only administering second doses on Feb. 8 and it is expected to continue until March 1.

Ferrer acknowledged that both a lack of trust and access to vaccine sites have contributed to inequities in vaccine distribution.

“I think it’s probably a little bit of both,” said Ferrer. “We have 390 vaccination sites that are open next week. So we have a few big sites, but we have way more small sites, and those small sites are in the hardest-hit neighborhoods. They’re pharmacies, they’re small clinics, they’re federally qualified health centers. Places where people already go in those neighborhoods, and they have trusted relationships.”

Ferrer said that although the Department of Public Health is doing everything they can to dispel any misinformation about the vaccine and open a vast network of vaccination sites, the biggest issue is the lack of vaccines.

“The biggest obstacle is also that we just don’t have enough vaccines,” said Ferrer. “We have to do a better job of getting them into the arms of the people who are at the highest risk. But we also need to do a better job just getting more vaccine doses into the county.”

CSUN’s drive-up vaccination site is open from 9 a.m. to 4 p.m. and will remain open regardless of weather conditions.

For more information and to find out when and where you can get vaccinated visit: www.publichealth.lacounty.gov/media/Coronavirus/vaccine/index.htm