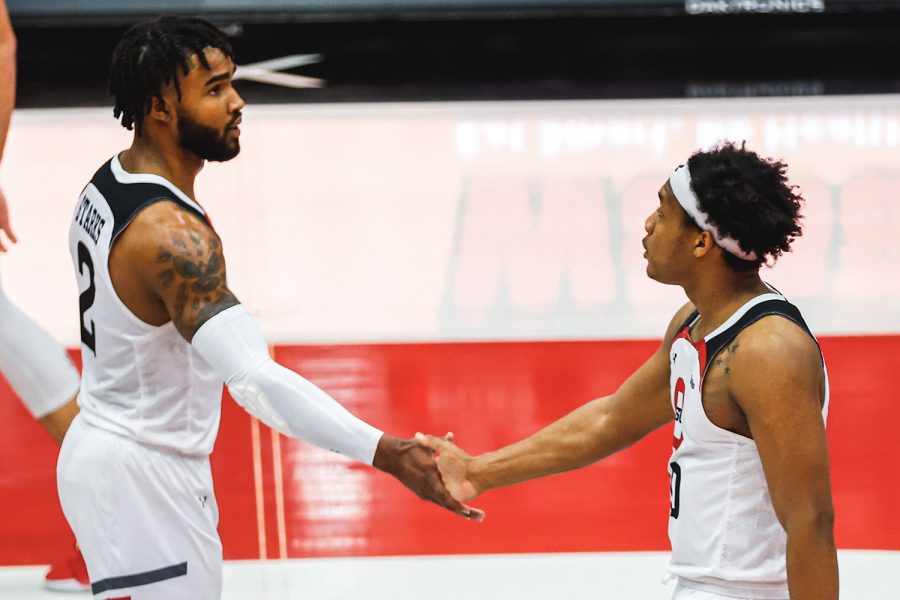 TJ Starks, left, high fives Darius Brown II, right, on court during CSUN's game against University of Hawai'i on Friday, Feb. 20, 2021. CSUN avenged their loss with a 88-80 win the next day.

With a minute left in overtime, Darius Brown II knew he could seal the game with a defensive stop.

The junior guard tried to secure victory for CSUN once already, with a 3-point shot at the end of regulation. It was a good look from the top of the key that ended up just missing the mark, leading to overtime.

As Hawai’i’s Junior Madut pulled up for a three, Brown saw his opportunity to clinch the game.

“We all knew they were looking for threes, it was our job to make sure they didn’t get any,” said Brown. “It felt nice but I’m just glad we came back [from out deficit]. That is really the most important thing.”

Brown saw the shooter hesitate and was able to get a clean swipe at the ball, getting him his fifth steal of the night. He looked down the floor and saw a wide open TJ Starks sprinting to the basket. The wide-open layup brought the Matador lead to 10, securing the win in a game where they were down by over 20 points in the first half.

That assist to Starks not only secured the win for the Matadors, but it also gave Brown his 10th assist, which was what he needed to secure his first career triple double.

“I’ve coached a lot of good guards, I’ve had a lot of them play in the NBA, I haven’t had a lot of guards have a statline like [Brown] did today,” CSUN head coach Mark Gottfried said.

Brown also notched a career high 16 rebounds, which is very rare for a guard. His efficient 8/12 shooting from the field, along with his tenacity on the boards and facilitating ability led CSUN to victory.

The Matadors avenged their loss to Hawai’i on Friday night by coming out on top 88-80 in a back-and-forth affair.

“We got down big in the first half, our guys could have quit but they didn’t,” Gottfried said. “We had a lot of young players out there, and I’d say they grew up today.”

Mirroring the story of their previous game against Hawai’i, the Matadors faced a big deficit early on in the game. Efficient shooting for the Rainbow Warriors matched with offensive struggles for the Matadors led to a 23 point deficit in the hirst half.

One of the players struggling the most early on was Starks, the Matadors’ main option on offense. After scoring a career high 31 points just 24 hours earlier, Starks scored just six points off 3/9 shooting in the first half due to fatigue and the opponents’ familiarity with his game.

“Being one of the older guys on the team, I can’t let missed shots phase me because at the end of the day, our job is to win the game,” Starks said.

Starks described an interaction he had with one of his coaches, where his coach described a recent Stephen Curry performance. Even though he had a lot of misses early on, Curry made the few shots his team needed to win at the end of the game.

“I ain’t Steph Curry, but I can at least apply that mindset to my game, both offensively and defensively,” Starks said.

As the first half came to a close, the Matadors were able to shift the momentum into their favor. In six minutes the team was able to go on an 18-2 run to turn a 37-14 blowout into a close game at 39-32.

“It’s frustrating when you start the game down like that when we all know we are capable of playing better at the beginning,” Brown said. “We ultimately know that we can compete in any game, we are never out of it.”

That run was capped off by a mid-range jumper from Brown at the buzzer. Brown’s efficient play in the first half was followed by an offensive explosion by his teammates in the second half.

“I know how we start halves so I wasn’t really considering what that shot did for us,” Brown said. “Momentum can change after halftime regardless of what happened before. I was more concerned on how we would start the second half.”

Amound Anderson – 5 points on 2/4 shots from the field. 1 assist and 3 rebounds@Sundial_Sports

The second half began with back-and-forth offense for both teams. The lead always stayed within the range of around 10 points throughout the period.

“We played four guards and spread the floor. We played a little differently than we normally do, and it worked out for us,” said Gottfried. “We were able to get to the foul line, drive to the basket and get some open looks for our shooters.”

Starks really started heating up once play resumed. He scored 22 of his 28 points in the second half and overtime, including a swing where Starks scored 10 straight points for the Matadors.

“I stay in the gym and work on my game, Coach tells me if I have an open shot I should take it, Starks said. “I try not to force shots, but sometimes I just feel like I can make it. I bring an offensive threat like no other in this conference,” Starks said.

Down by 65-51 with just 10 minutes remaining, the Matadors were able to go on a 24-10 run to tie the game at 75-75. The offensive play by Brown and Starks led the way for other players to get open shots.

Freshman forward Alex Merkviladze and freshman guard Amound Anderson both scored 16 points each, thanks to their efficient shooting from beyond the arch. The duo went 3/5 and 3/4 from respecitvely.

“We need some guys to step up and score other than Darius [Brown II] and TJ [Starks],” said Gottfried. We’ve been able to get a little bit of that lately, but we need to have more of it.”

The Matadors improve to an overall record of 8-9 with a 4-6 record against Big West opponents. Four games remain for the team, with a double header next weekend at CSU Bakersfield and two games at home against third place UC Riverside to close out the regular season.