One year later: A look back at the Kobe and Gianna Bryant memorial 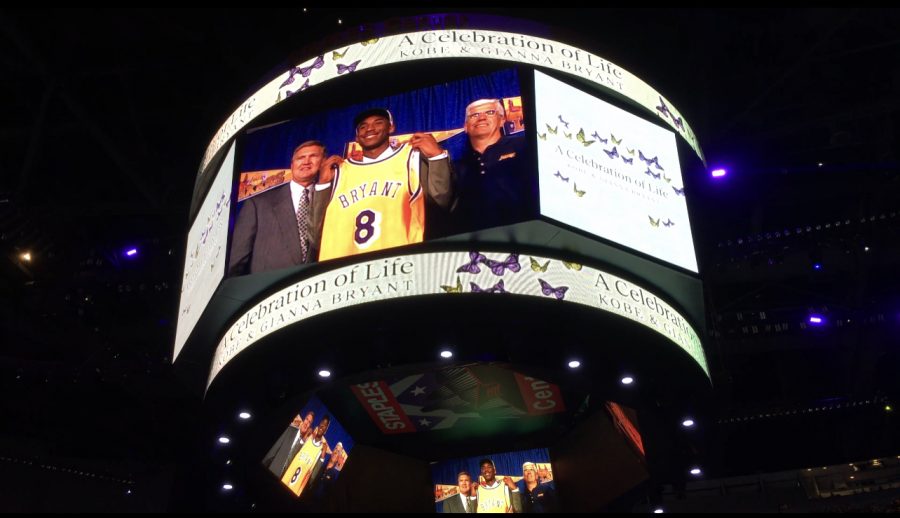 A highlight of Bryant's basketball career displayed on the jumbotron on Feb. 24, 2020 at the Staples Center in Los Angeles, Calif.

Waking up that morning, I grabbed my essentials: my phone, my I.D., money and my car keys. Fans who were able to get a ticket to the Kobe and Gianna Bryant memorial were instructed to bring as little things as possible. Luckily, the drive to the Staples Center arena wasn’t as bad as I thought it would be and the parking was even easier to find. Once I stepped out of the parking lot and started to make my way to the arena, it was like walking into a different world.

Fans from different walks of life were at the Staples Center in the early morning of Feb. 24, 2020. The streets were packed with fans and newscasters hoping to catch an exclusive glimpse of the event, but only a few lucky ones were able to get a ticket and enter the arena.

Staples Center is an iconic venue for sports and entertainment. My family and I are huge fans of the Lakers but we were never able to get a ticket to watch a game due to tickets selling out. When tickets were available, it was only from scalpers who would resell the tickets for a higher price.

Once I received the notification that I was able to get tickets for the event, I instantly purchased them with no hesitation. By the time fans were let inside, we were given numerous keepsakes: a T-shirt, a pin and a commemorative ticket and booklet.

The halls bustled with voices and the shutters of cellphone cameras as many began to pile into the arena. I’ve watched multiple games from my television screen with my family. As I took in the scenery, a wave of joy and sorrow hit me like a train.

The arena had a tint of purple that surrounded the seats with a stage placed in the middle of the court. A piano and chairs were placed next to the stage and multiple bouquets of red roses settled among the platform.

Music, videos and photographs of Kobe and Gianna were presented through the jumbotron with the words, “A Celebration of Life: Kobe & Gianna Bryant” headlining the smaller screens.

As time for the start of the ceremony was drawing closer, recognizable faces began to take their seats that were around the stage.

The Kardashians, Kanye West, Jimmy Kimmel, Jennifer Lopez, Alex Rodriguez, LeBron James, Anthony Davis and many more began to settle in and hug one another. Vanessa Bryant and her daughters were the last ones to arrive. The crowd rose to their feet and applauded as they made their way to the very front row. As soon as the ceremony began, the atmosphere completely changed.

The ceremony was filled with love, respect and adoration for the fallen former basketball player and his daughter. Tears were shed upon the moments where close friends and family would give their speeches that reflected the humanistic nature of who Kobe and Gianna were when they were alive.

Rob Pelinka, Kobe’s agent and long-time friend, spoke about how Kobe was a father who supported and bestowed knowledge upon his daughters. He was respected by his teammates and made endless friendships that he still kept close in contact with till the day he died.

Vannesa Bryant spoke about how Gianna was a strong-minded and optimistic 13-year-old who was looking forward to entering high school and eventually going professional with her basketball career in the future.

The moment that really struck me was when Vannessa Bryant said her final goodbyes to her husband and daughter. Despite having 20,000 eyes from the stadium and many more watching through their television screens, she was able to finish her speech.

Michael Jordan, Sabrina Ionescu and Kobe’s former teammate Shaquille O’Neal were among many speakers who spoke during the ceremony. Jordan’s words about how Kobe was seen as a little brother to him made me think of my siblings. When Ionescu talked about how she was helping Gianna become a better athlete, I thought of my younger sister, who lives for sporst. Even though they talked about people who I’ve only known through the media, it was as if I was looking at a family picture and seeing my family within Kobe and Gianna.

I remember sitting next to a couple that told me when they heard about Kobe’s death, they weren’t going to miss the ceremony if one was to be made. They were at Kobe’s last game in 2016 and it was a complete shock when they heard about his passing. Being in the arena and having multiple people sitting around me, I knew everyone had a story to tell when it came to a star-studded figure as Kobe Bryant.

He was an inspiration, an icon, a man who defied the odds and had a career that not only showed his basketball skills, but also a creator in the arts. Kobe’s short animated film, “Dear Basketball,” was presented during the ceremony. It was written and narrated by the former basketball player and won an Academy Award for Best Animated Short Film in 2017.

By the end of the ceremony, the crowd didn’t quickly disperse. Many were waiting on the side lines, talking amongst each other about their experience and how much Kobe changed their lives. As I look back upon that day, I sometimes wish I could’ve stayed a little longer to talk to those who were in close proximity.

February 24 will always be a day that I will think, “I was really there.” As I write this reflection, I think back of the last thing Jimmy Kimmel said before the conclusion of the memorial, “Don’t forget: work hard and hug the people you love.”

Those words now have a deeper meaning and I currently keep close to my heart.