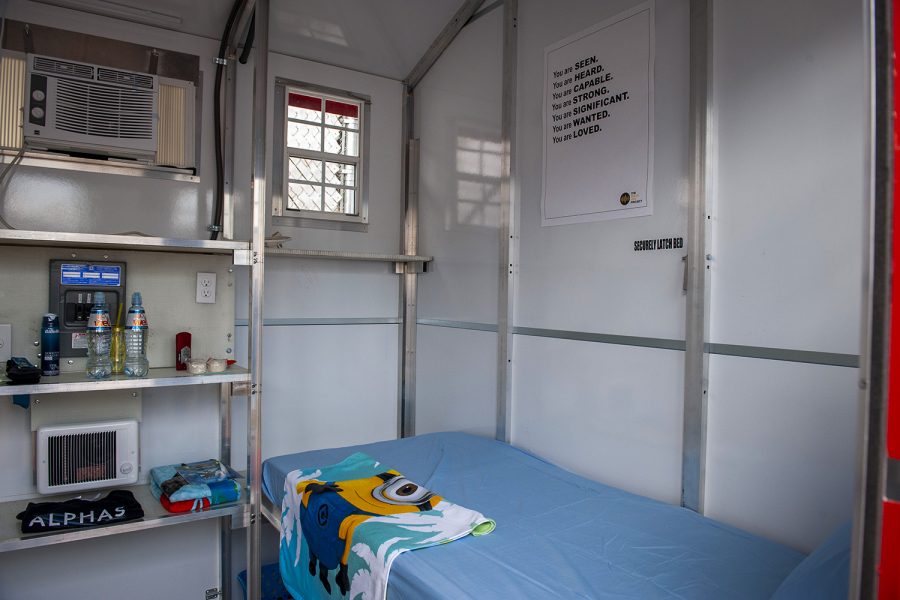 The interior of 64 square feet tiny home which has two beds, shelves for storage, heat and air conditioning in North Hollywood, Calif., on Tuesday, Feb. 9, 2021.

The first ever tiny homes community in Los Angeles County opened in North Hollywood on Feb. 1 as part of a continued effort to combat the ongoing homelessness crisis.
Managed by Hope of the Valley, the Chandler Street Tiny Home Village is one of nine housing shelters the faith-based nonprofit organization operates.
The village is capable of housing 75 people within its 40 tiny home units. Each 64 square feet unit is equipped with two beds, heating, air conditioning, windows, a small desk and a locking front door.
The lock on the front door is a key element of the housing unit that gives residents a sense of ownership.
“Having their own space is an essential part of their life skills development, it gives folks that sense of privacy and independence in their life and makes it an easier transition from a tiny home site back into permanent based housing,” said Irvin Parra, Sr. Director of Interim Housing at Hope of the Valley.

Residents of the village will have access to services and amenities such as mental health support, housing placement, job training, meals, showers and Wi-Fi.
The city of Los Angeles funded and built the project in an attempt to alleviate a homelessness problem that has been further exacerbated by the pandemic. The number of people without homes in L.A. County increased by more than 12% last year to a total of 66,433, according to Los Angeles Homeless Service Authority’s 2020 Homeless Count.
Qualifications to live in the tiny home community include being over 18, homeless and living within a three-mile radius of the site.
As a harm reduction and low barrier site, the village does not decline services or enrollment to those struggling with substance abuse. No alcohol or drugs are permitted on site and there is a 10 p.m. curfew for residents.
Hope of the Valley plans to open another tiny home village at Alexandria Park in North Hollywood in April with 103 housing units.