From Northridge to Indianapolis: Marcus Brady’s journey to the NFL 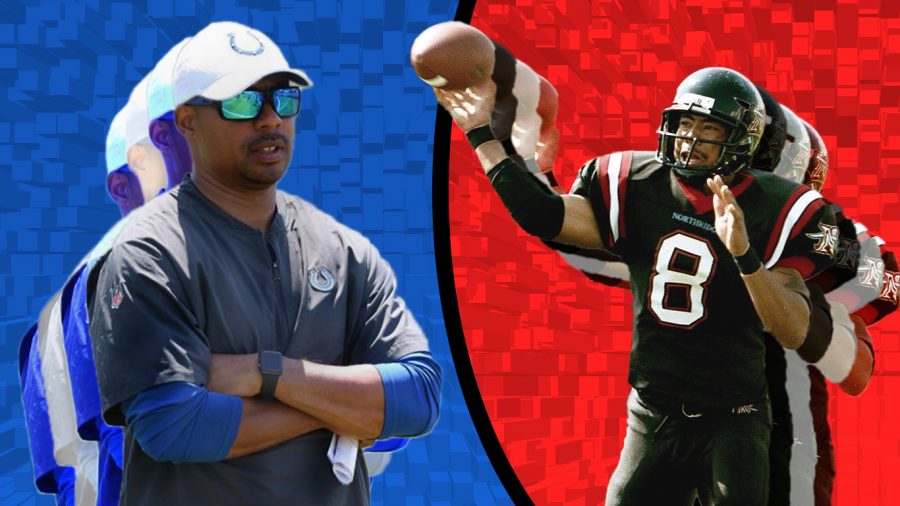 Photos courtesy of CSUN Athletics and the Indianapolis Colts

Coming out of high school, Marcus Brady did not have CSUN anywhere near his radar. The young quarterback originally chose to play football at the United States Naval Academy. Other schools wanted Brady to switch his position, but the Naval Academy let him play the position he loved.

However, Brady realized that his lifestyle didn’t mesh with that of a military institute. After a three-week summer, Brady left the school and began to look for schools with a scholarship that would let him play football.

“CSUN was in the Big Sky Conference at the time, which was a very pass-happy conference,” said Brady. “That style gave me the opportunity to showcase what I could do as a quarterback.”

Early in the recruiting process, CSUN made an attempt to get Brady before he went to the Naval Academy by offering him a full scholarship. According to Brady, CSUN didn’t think there was a chance they would get him. Then a few months later, Brady called to see if CSUN had any scholarships still available. The Matadors jumped at the opportunity to get their quarterback of the future.

Brady redshirted his first year, where he spent his time absorbing and adapting to the offensive schemes. Starting in the 1998 season, Brady took over as starting quarterback until the program was disbanded in 2001.

“I had some good years at CSUN, met some of my lifelong friends there,” Brady said. “It was a place I was able to play the sport that I loved.”

In his four years starting at quarterback for the Matadors, Brady proved himself to be one of the best quarterbacks in Division I-AA. He broke numerous CSUN passing records during his tenure, including completions (1,036), attempts (1,677), yards (12,445), and touchdowns (109). In his junior and senior seasons, Brady was named an All-American.

“Marcus was a prototypical run-and-shoot quarterback. He ran the system so well, ” said CSUN Sports Information Director Matt Monroe. “It was a fun time to watch football at Northridge.”

Monroe, who was the SID responsible for CSUN football during its last season, spent a lot of time around the team and with Brady.

“Marcus was great, he was a complete pro in handling anything we needed of him,” said Monroe. “He never had any sort of negative attitude and was always very personable and super easy to work with.”

Although Brady was setting records with his play on the field, the program was on its last legs.

In his five years as a Matador, Brady had three separate head coaches. Sanctions as well as a negative win-loss record led to a revolving door of coaches.

During Brady’s four years starting, the CSUN football team had a combined 19-24 overall record. The team was also without a conference his senior year as CSUN switched from the Big Sky to the Big West, which did not have football as a sport.

The program, which cost $1.3 million annually, also endured various budgetary problems. The athletic department had reported $725,000 in losses by the end of the fiscal year in 2001, and it could not sustain the football program. The program was ultimately disbanded as a cost saving measure by the university.

“We were told that season was going to be our last season,” said Brady. “We tried to fight to keep it, but as you can see that didn’t happen.”

After his Matador career came to an end, Brady had aspirations to play professionally. Brady tried out for the Green Bay Packers on his own and attended their training camp, but didn’t make the team.

Brady did not let this setback kill his ambition to play football. He decided to go north to Canada and play in the Canadian Football League, where he played from 2002-2008. During his CFL career, Brady played for the Toronto Argonauts, Hamilton Tiger-Cats and Montreal Alouettes.

At the age of 28, Brady decided to retire from playing football. Even though his playing days were over, Brady still wanted to be involved with the sport he loved. Then he thought of being a coach.

“As I continued to grow as a player, I started to think about what I was going to do when I was done playing,” Brady said. “After my first or second year of playing in the CFL, I knew once I was done playing I would transition into coaching.

“I coached [in Canada] for nine years, but the ultimate goal was to get back down to the States and ultimately into the NFL,” said Brady.

Brady got his opportunity in 2018.

“There is always going to be pressure because you want to win, that’s how you keep your job in this business. I want to work hard and be successful so that other African Americans can get the same opportunities.”

The Indianapolis head coach situation was finalized after the typical time period of hiring a coach. This meant that many who would have been considered good candidates for assistant coach positions had already been hired elsewhere. This forced Reich to look harder for potential assistants.

“[Reich] was looking for a quarterbacks coach, so he called friends of his, who recommended me,” said Brady. “They flew me out to Indianapolis for an interview and ended up hiring me that day.”

The new job was not only a great jump in his career, but was a great improvement for his family life. During his 16 years of working in the CFL, Brady was away from his family for months at a time when he had to spend the season in Canada.

“It was always hard for my family for me to go back up to Canada for six months to coach,” said Brady. “That’s why I was always trying to find some work in the States, so when that opportunity came it was truly a blessing.”

“I actually did have interviews lined up elsewhere, but when this job became available they offered it to me and I took it right away,” said Brady. “It was great to be able to stay with this great organization.”

The NFL has long been under fire for their lack of diversity when it comes to coaching hires. In the 2020 season, only two out of the 32 offensive coordinators were Black. Brady’s hiring, along with the hiring of Anthony Lynn in Detroit and Eric Studesville in Miami, now brings the total to five. In contrast, Black players make up over 65% of the NFL’s nearly 1700 player base.

With his first season in the driver’s seat of an NFL offensive coming up over the horizon, a journey that began at North Campus Stadium has now led up to one of the most exclusive and sought after positions in the world of football.