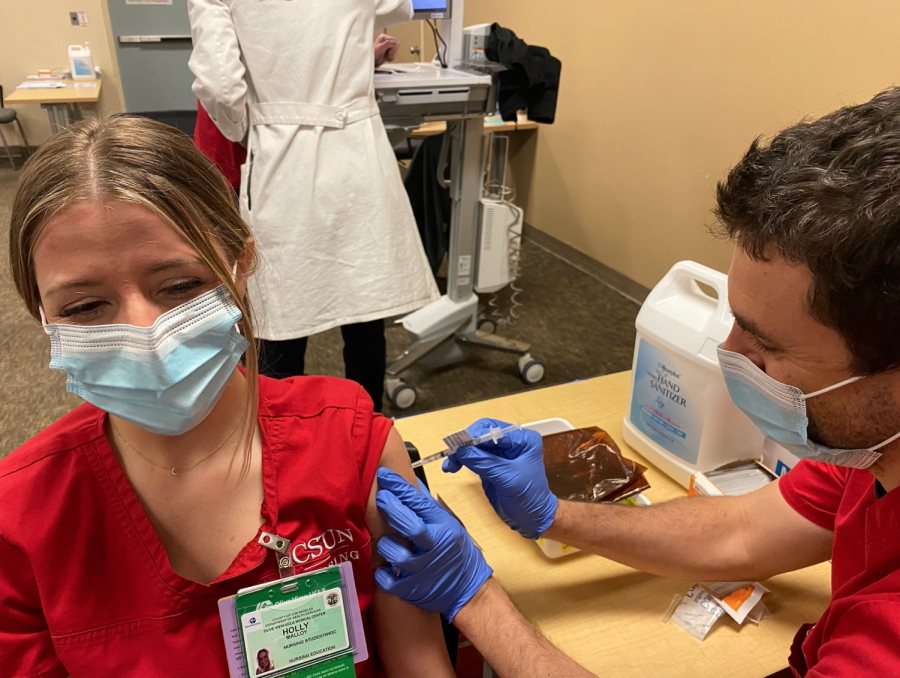 “Front-line Heroes” is a Daily Sundial weekly series that honors those who are fighting COVID-19 on the front lines — doctors, food bank volunteers, retail workers, testing site volunteers and other countless Angelenos who are keeping everyone safe during the pandemic.

If you know someone you think that qualifies, send us an email at Editor@csun.edu

This week’s front-line hero is Sam Sherry, a nursing student at CSUN who will graduate in May.

Sherry works shifts up to 12 hours in the Neonatal Intensive Care Unit at the Children’s Hospital Los Angeles and also assists with vaccinations at the Olive View-UCLA Medical Center and USC Verdugo Hills Hospital.

Sherry said his experience volunteering with vaccinations and seeing the pandemic evolve has been a markedly unique one.

“I don’t think anybody saw this coming, but it is exciting to be part of something worldwide,” Sherry said. No vaccine has ever been created so quickly because the need was so dire.”

“It’s been isolating,” Sherry said. “Classes have gone online so you don’t see people or classmates, friends, family as much or at all.”

Sherry insisted that the challenges he faces pale in comparison to others in his profession, but he knows it’s not a competition.

“The people who are the most drained are the people working with COVID patients in intensive care units, where they’re seeing a lot more death than they’re accustomed to,” Sherry said. “I’ve seen people who have seen more death in one year then they have in their entire careers. ”

Sherry said he is propelled forward by his ability to make real change as a vaccine volunteer.

“I remind myself that this is the job, there are people who are really trying hard to get a shot, to find somewhere to get the vaccine,” Sherry said. “I realize that there’s no place for being tired or complacent, when there’s so much work yet to be done.”

Sherry and other CSUN nurses were vaccinated one day when there were spare shots as some people did not show up for their appointments.

“I’m one of the fortunate ones to have been vaccinated in the healthcare industry,” he said. “The first couple times I’ve [administered vaccinations were for] healthcare workers themselves. It was gratifying to know that [the vaccinations] went to people who needed it most,” Sherry said.

Although Sherry is actively working in healthcare, he’s still in school and experiencing many of the same troubles other students do.

“It’s been different, it’s not anything anyone anticipated or signed up for,” he said. “The hard part is the social isolation. Human beings are social animals, you want that contact, that familiarity.”
Sherry said that although it’s difficult to remain at home, isolated from our friends and family, shirking COVID safety protocols isn’t the answer.

“I would encourage people to take a broader picture, look at things from a perspective other than your own, realize that there are people like I mentioned who are not you or me,” he said. “Hang in there just a bit longer until more vaccines are in the arms of other people.”