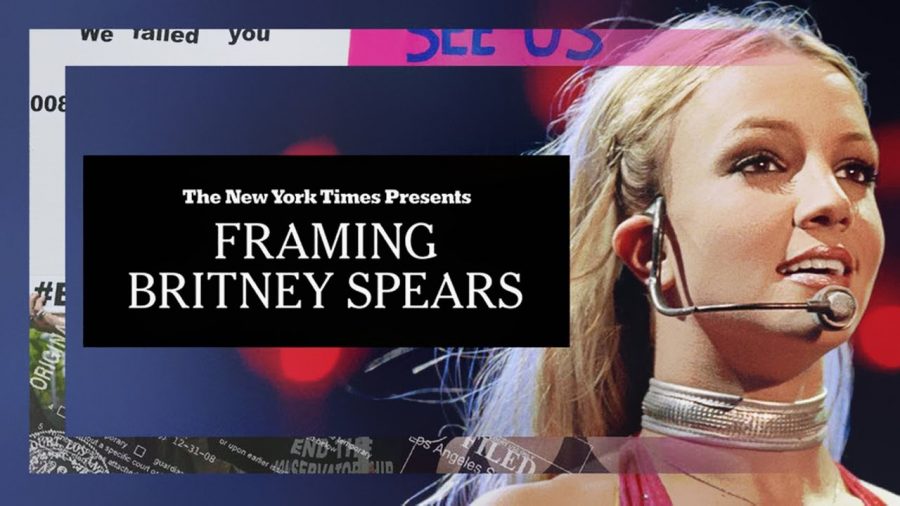 “Framing Britney Spears” is a brief, yet informative glimpse at Britney’s troubles in the public eye. The nostalgic video clips throughout the film emphasize the shockingly misogynistic treatment of Britney documented on screen, showing how the media unfairly fixates on the imperfections of young women in the limelight.

The documentary, which is reported and produced by the New York Times, uses media footage from the 1990s and 2000s to provide context. Long-time acquaintances, legal experts and NYT reporters appear on screen to analyze the exploitation and hypersexualization of Britney in the mass media.

It also sheds light on the recent legal battles with her father, Jamie Spears, who was appointed by a judge to handle her personal and monetary affairs as her conservator in 2008.

A court appoints a conservator when someone is considered incapable of taking care of themselves physically or financially.

Fans have questioned Jamie’s motive since the start of the conservatorship.

He currently co-manages her fortune beside a private financial institution called Bessemer Trust. Jamie’s request to remove Bessemer from the conservatorship was denied by a court in early February.

“There’s been a lot of speculation as to whether it’s in Britney’s own interest, and is this good for her? Is this what she wants?” said a senior editor at the New York Times in the documentary.

The hashtag #FreeBritney took off on social media when a group of supporters showed up with posters displaying the phrase outside West Hollywood City Hall during a court hearing in 2019 . Fans gathered to express concerns about the popstar’s well being due to the conservatorship.

In addition to the controversy, the documentary takes a biographical approach. Director Samantha Stark walks viewers through Britney’s life from a young starlet of humble beginnings in Kentwood, Louisiana to the recent conservatorship controversy.

Britney has been portrayed in a hypersexual manner since her first national appearance on television. A clip from Star Search showed the host asking a 10- year-old Britney, “Do you have a boyfriend?” She responded with “No, they’re mean,” which prompted the audience to laugh.

Stark tells the story of Britney’s upbringing in Louisiana with a segment explaining Britney’s family background. Her modest upbringing beside her mother and father in Louisiana are told through personal stories from friends like Felicia Culotta, who served as Britney’s longtime assistant.

Culotta supervised Britney during her preteen and early teen years when Lynne Spears, Britney’s mom, stayed in Louisiana to raise her younger children. It was around this time Britney was signed as a cast member for the Mickey Mouse Club television show remake in the ‘90s.

Culotta talked about Britney’s desire for a “normal” lifestyle after spending part of her childhood performing on the show. Back in Louisiana, Britney attended public school and joined the basketball team. It was not much later that she returned to the stage as a confident performer.

Old pictures and footage of Britney performing at malls depict her rise to fame. Her growing popularity was captured on MTV, where she was often interviewed by hosts of the popular program, “Total Request Live.”

“She seemed very approachable to the audience, so they could really connect with her in a way that has never really been severed,” said Dave Holmes, a TRL host from 1998 to 2002. A montage of clips from news outlets of the time capture the quick growth of Britney’s mass appeal.

Unfortunately, promotional appearances by Britney were dominated by commentary about her body, her wardrobe choices or her intimate relationships. Clips from popular talk shows and news programs of the early 2000s reveal to the viewers a harsh contrast from today’s socially conscious media coverage.

One host from a British talk show misled Britney by saying, “everyone’s talking about it.” She naively asked, “What?” “Well, your breasts. You seem to get furious when a talk show host comes up with this subject,” he continued.

From the clip, it is clear through her giggle and response, “My breasts?” that she was uncomfortable. Questions about Britney’s belief in chastity and opinions about her sexuality are asked by reporters unashamedly. The overtly sexist treatment by the media is nearly unimaginable in a post #MeToo world.

Stark introduces Britney’s relationship with Justin Timberlake into the documentary as a way to
explore misogyny in popular culture. Audio from a radio show reveals Timberlake receiving praise for admitting he slept with Britney. Meanwhile ABC’s “Primetime Thursday” co-anchor Diane Sawyer asked Britney a set of personal questions that shamed the pop star amid her break-up with Timberlake.

“If you were talking to your little sister now and the girl who said that she was going to stay a virgin until she got married, do you still think there is something to be said for that?” Sawyer asked Britney during the ABC interview.

This part of the documentary was one of the most talked about upon its release. Sawyer’s condescension reflected the obvious agenda to evoke emotion from a vulnerable, 21-year-old Britney. The media had once more abused Britney by publicizing her personal troubles.

The second half of the hour and 15 minute long special focused on Britney’s fall from grace. Tabloid magazines ignored her need for privacy amid messy custody battles. Footage shows Britney constantly having to defend herself from photographers who surrounded her the instant she stepped into the public.

She was labeled crazy by the press. TV hosts made jokes about her behavior for laughs and ratings. The jokes continued even after she was transported to UCLA Medical Center for psychiatric evaluation in 2008.

Footage from an MTV special revealed details about the relationship between Britney and her father during the first year of their conservatorship. In a clip, she vocalized her opposition to the “restraints” of the conservatorship handled by Jamie.

Social media’s impact on the #FreeBritney movement is also discussed. Audio from a fan-based podcast and clips from Britney’s Instagram account updates viewers on the latest rumors surrounding her freedom. Videos of protestors chanting “Free Britney” demonstrates the relentless efforts from supporters to gain media attention, leading to the release of this documentary.

The documentary openly takes a side because of the partial information given by sources. At the end of the film, a statement by the NYT explains that they attempted to contact those closely involved with the conservatorship including Britney, Jamie, and the lawyers, but were unable to get any responses.

“I know at some point she will tell her story. I know she will and I am so grateful for when that point comes,” Culotta said.

The interviews featured are mostly based on previously reported news with the exception of Culotta. The old interviews, published photographs and behind-the-scenes footage are recycled, but may offer the audience a new impression of the celebrity.

The documentary is successful in dissecting the toxicity of the media. The story is eye-opening to the blatant sexism she faced throughout her early years in the spotlight to those who were too young to remember or pay attention.

There was a time when audiences considered it funny to watch hosts ask uncomfortable questions to their guests in hopes of getting a money-shot reaction, which has no place in modern, professional media.

In an age of increased social awareness, “Framing Britney Spears” leaves viewers in awe at society’s once acceptable actions of exposing women’s imperfections for entertainment.

The last scene shows Britney in a bathtub with a pink rose.

“See the pink rose? See how beautiful that is?” she said, crushing the ‘flower’ in her hand, “it’s just soap, that’s all it is. It’s just soap. Not really a flower at all.”

One can only assume this scene was carefully chosen by producers to serve as a metaphor for Britney’s experience in the industry. She is the pink rose, something beautiful and perfect as portrayed in the media, only to be crushed and revealed as “just soap,” a representation of succumbing to the vulnerability experienced by humans, regardless of fame and beauty.