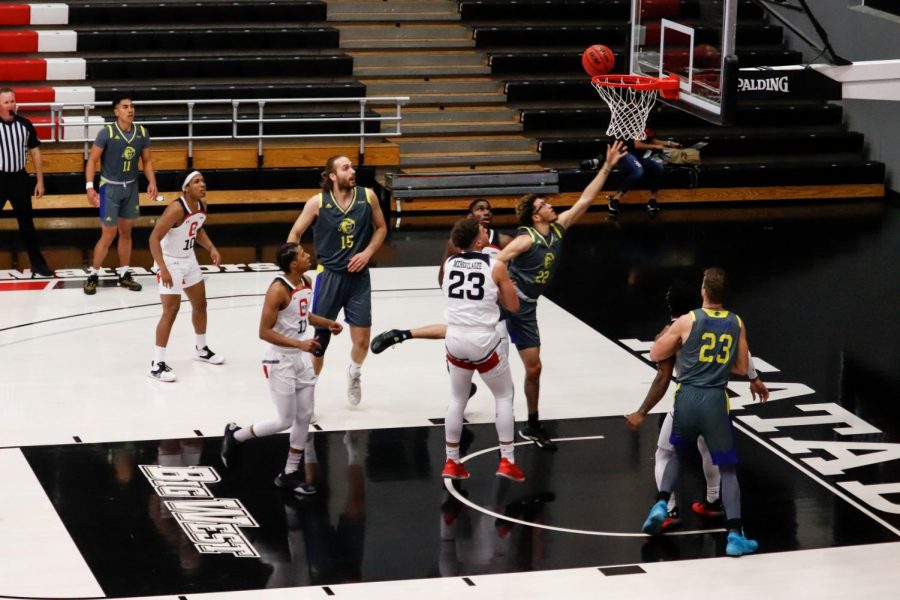 UC Riverside Highlanders' guard Dominick Pickett attempts a layup against the CSUN Matadors at the Matadome in Northridge, Calif., on Friday, March 5, 2021. The Matadors lost 72-68.

With less than 25 seconds left in the game, the Matadors had the ball, trailing the UC Riverside Highlanders by three. They put the ball into the hands of junior guard TJ Starks, who came into the game as the Big West Conference’s leading scorer and was once again leading the Matadors with 19 points.

With the clock running down, the Matadors ran a play to try and get Starks open for a three to tie it. However, he turned the ball over and the clock ran down to one second.

“We just had a slip up,” Starks said. “Coach told us to run a play, we tried to run it, it didn’t work, tried to go get the ball, we turned it over, and that was the end of it.”

CSUN lost to UC Riverside 68-72. The game had 12 lead changes and 10 ties, however the Matadors trailed most of the game as they only led for nine minutes and 51 seconds.

With three freshman players starting for the Matadors, head coach Mark Gottfried thought the experience difference between the two teams played a factor in the game and credited the Highlanders for executing better down the stretch.

“That’s kind of where we are right now,” Gottfried said. “We’re depending upon a lot of young guys and our kids played really hard. I thought they gave us everything they could, they played hard, just didn’t make enough plays down the stretch.”

The Matadors made it an emphasis to get Starks shooting more late in the first and into the second, according to Gottfried. Starks finished the first half with eight shots, but four of them came in the final minute and 35 seconds. He finished with 20 shots on 45% shooting, and also added six assists.

“I thought in the second half he did a great job,” Gottfried said about Starks. “And I thought a few times on his shot he got hit on the arm and we were all hunting for some fouls that didn’t get called, but that’s part of the game. He’ll bounce back tomorrow, I think, and have a great game.”

Freshman forward Alex Merkviladze also had a strong game. He finished second on the team with 17 points and led the game in rebounding with 13.

“The number one thing is we can’t give them 12 threes,” Gottfried said. “I think that was the point of emphasis today. We didn’t do a very good job when with that and to win we’ve got to do a much better job at not letting them get 12 threes.”

With the loss, the Matadors dropped to 9-11 on the season and 5-8 in conference. They will play the Highlanders again on Saturday to finish their final series of the season. Tipoff will be at 4 p.m.

“We’re gonna bounce back tomorrow,” Merkviladze said. “It will be way better and a way different game.”