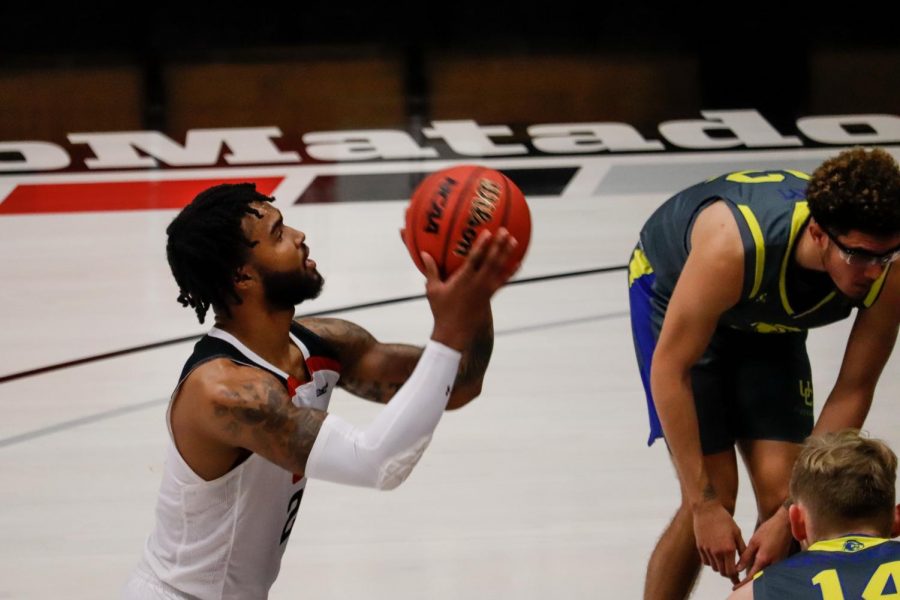 CSUN guard TJ Starks shoots a free throw in a game against the UC Riverside Highlanders at the Matadome in Northridge, Calif., on Friday, March 5, 2021.

Everything was going right for the Matadors early on. They were playing with energy and tenacity. The bench was excited and the players were pumped up. A team familiar with being down early ended up leading the entire game, but a few mistakes at the end led them to lose that lead right at the end.

“I thought our second-half turnovers hurt us, we just had too many,” said CSUN head coach Mark Gottfried. “We got a lot of young guys in the game and they just needed to shore a few things up.”

After being up as much as 21-4 early in the first half, the Matadors ended up falling to the UC Riverside Highlanders, 66-65. The Matadors held the lead all the way until the last 38 seconds of the game.

CSUN started off on fire offensively, with baskets from junior guard TJ Starks and freshmen forward Alex Merkviladze that helped get the lead up to 7-0 not even two minutes into the game.

The lead reached double digits as early as 16:50 in the first half, as a dunk from freshman forward Fidelis Okereke put the Matadors up 12-2. A 3-pointer from Starks capped off the Matadors’ 21-4 run to start the game.

Up by 17 points, the Matadors entered a scoring drought in which they didn’t score a point for over five minutes. This lack of scoring was what the Highlanders needed to get back in the game as they scored 10 straight points in this stretch.

A layup from junior guard Darius Brown II ended the CSUN scoring drought and brought their lead back up to nine. For the rest of the half, the teams went back and forth trading baskets, with the scoring margin hardly changing.

With under two minutes left in the half, the Highlanders mustered up a 7-0 to bring the Matadors’ lead down to just five points. Both teams went into their locker rooms with the score at 38-33.

“We had a great start, that was important for us,” said Gottfried. “But it’s hard to maintain that for 40 minutes.”

The dynamic duo of Stark and Brown were the main scorers for the Matadors coming out of the break. Brown eclipsed his first-half scoring total minutes into the second half, scoring six of the team’s first eight second-half points.

Throughout this period, Riverside would make runs, getting close to taking the lead just for CSUN to have a run of their own to push them back. At the 10 minute mark, the Highlanders shrunk the Matadors’ lead down to just one point. The Matadors responded with an 11-1 run, pushing their lead back up to double digits.

Late in the game, inefficient play from the Matadors helped the Highlanders conduct another attempt at a comeback. This was helped by four turnovers by the Matadors in the last five minutes of the game.

“We played kind of bad defense in the second half so I believe that’s hope they made their run,” said Merkviladze. “Everybody makes mistakes. It’s part of basketball.”

After being up by 10 points, the Matadors gave up a 15-4 run to the Highlanders, who took their first lead of the game with 38 seconds remaining.

In the last 10 seconds of the game, Starks took two shots from the 3-point range that would have secured a Matador victory. The first one missed but CSUN caught a break when Riverside missed their free throw.

Coming out of the timeout, Gottfried had drawn up the play for Starks to once again take a game-winning shot. With three seconds left, Brown got the ball from the inbound and passed it straight to Starks, who launched a confident three with two defenders in his face.

The shot went off the front rim and handed CSUN a defeat at their final home game of the season.

“Our guys competed extremely hard,” Gottfried said. “We had a chance at the end with a great shot to win the game, it just didn’t go down.”

Starks finished the game with a team-high 25 points off 11/22 shooting from the field. He also added on three rebounds and four assists. Merkviladze had a big night on the boards, bringing down a total of 13 rebounds which, along with his 13 points, gave him a double-double.

Brown and freshman guard Amound Anderson were the main facilitators of the night, with each player recording a total of six assists. Okereke had a good night on the definitive end, getting a total of seven rebounds and three blocks.

With this being the team’s final regular-season game, the Matadors overall record for the 2020-21 basketball season finishes at 9-12 overall with a 5-9 record in conference play.

“It was a weird year for everybody because of coronavirus,” Merkviladze said. “We could not have fans so it was hard for us to get our energy right. However, I think we learned a lot and grew as a team together.”

In a season filled with unprecedented challenges for everyone involved, the team was able to successfully and safely conduct a basketball season — an accomplishment in its own right.

“I’m really proud of our guys. They faced a lot of adversity,” said Gottfried. “Our guys never quit, including our young guys who continued to get better and better. We’ve had a lot of positives but we’ve just come up short a few too many times.”

The Matadors now look ahead to the postseason, where they will be participating in the Big West tournament in Las Vegas. Out of the 10 Big West teams, CSUN finished eighth. They will have to take on ninth-ranked Long Beach State.

“We want to win the Big West so that we can make it into March Madness, that is our goal,” said Merkviladze.

The winner of the CSUN-Long Beach State matchup will move on to face the No. 1 seed UC Santa Barbara on Thursday.

“We will be really excited to play, it’s a fresh new season for us,” Gottfried said. “Our league is very balanced so I think there are a lot of teams that have a chance to go win games there.”

CSUN’s game against Long Beach will take place at 3 p.m on Tuesday.