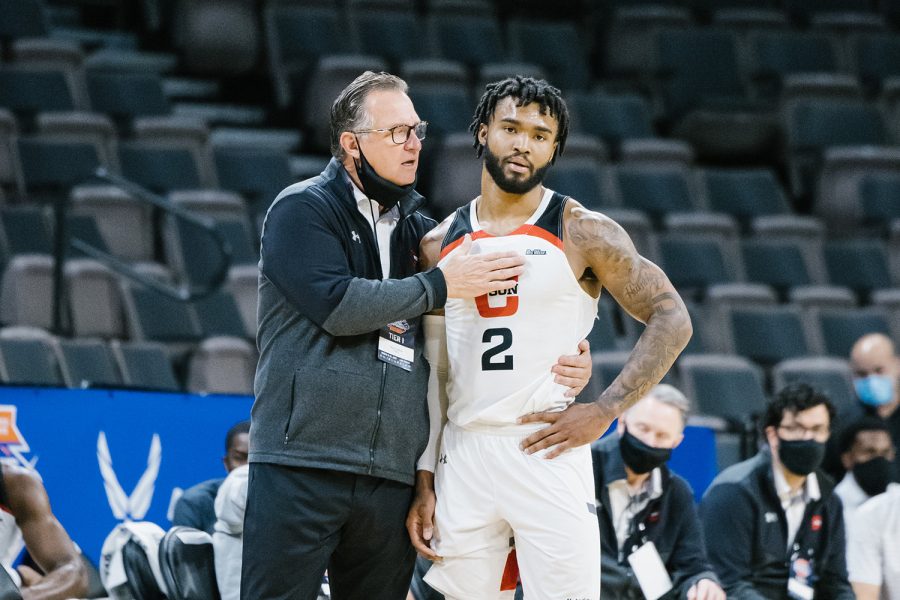 Courtesy of the Big West Conference

It was almost as if you could feel non-existent people in the Michelob Ultra Arena on the edge of the empty seats, waiting for something to happen.

No. 8 seed CSUN was in a spot they had gotten all too familiar with throughout the season: trailing big early on in games. They had experience rallying late, so it seemed inevitable they would get over their slow start and make things interesting against No. 9 seed Long Beach State. All they needed was a small run and the momentum would shift, just like it had so many times before.

That never happened. Instead, the Beach lead kept growing.

The Matadors looked more and more defeated as time went on. The game was over long, long before the final buzzer went off and handed CSUN a 63-85 loss in the opening game of the Big West Tournament, ending their season.

“We just couldn’t find a way to get the ball in the basket very often,” CSUN head coach Mark Gottfried said. “What happens then, it just puts so much pressure on your defense, where your defense has to be spectacular because you’re not scoring at all.”

CSUN’s shooting woes were on full display, especially in the first half. Redshirt junior guard TJ Starks led the team with 14 points at the half.

Starks finished with 23 points while shooting 9-23 from the field. CSUN’s next leading scorer was freshman Atin Wright, who had 16 points in 19 minutes. Wright and Starks were the only CSUN players who scored in double figures, as the team shot 29% from the field as compared to a 52% shooting day for Long Beach.

The Matadors forced 20 turnovers for the Beach, but were unable to capitalize with just 22 points off them. It didn’t help that CSUN committed 13 turnovers of their own. They were also out-rebounded and outscored by the Beach’s bench.

“I was confident in our team. I thought we were going to come out here and showcase our skills, do what we do,” Starks said. “I think we’re all disappointed, but that’s just the game of basketball.”

It was far from a normal season, or even a normal offseason, for the Matadors. Only one starter, junior point guard Darius Brown II, returned from last season after seven players transferred and Lamine Diane declared for the NBA Draft. This year’s Matador squad featured six newcomers, five of them freshmen, along with Starks, who redshirted the previous season due to NCAA transfer rules.

“If you have a veteran team coming back, the weight room and some of that is not as important,” Gottfried said. “When you have a lot of young guys, look around the country. Look and see what happened to Kentucky and Duke and some of them. When all those young kids never had the spring and the summer … It really puts you behind.”

With a season of experience now under the belt of this young Matador team, both Gottfried and Starks believe the future is bright. A full offseason will be critical for this young core’s development.