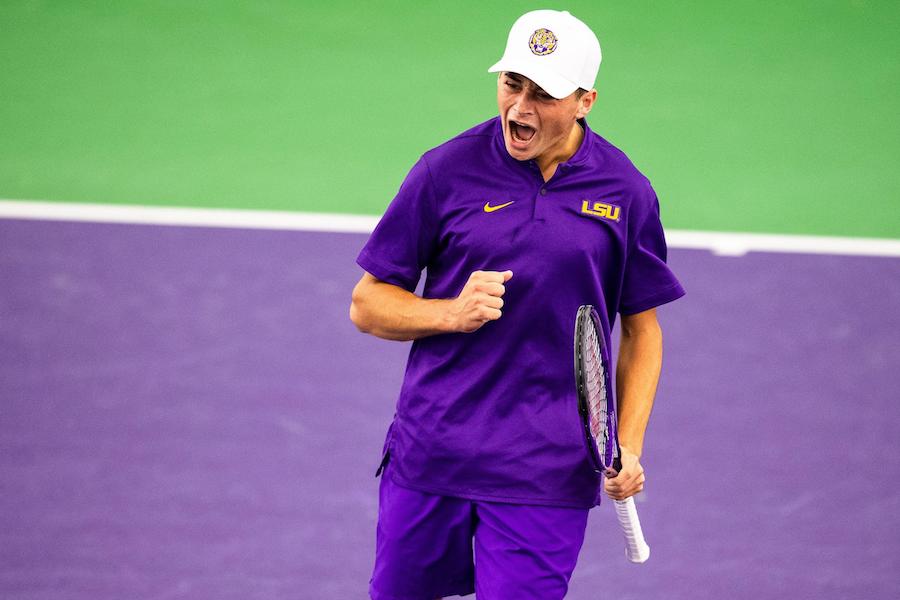 Ronald, better known as Ronnie, Hohmann has steadily risen through the ranks as a professional tennis player – now a five-star recruit with a professional ranking playing for the Louisiana State University Tigers, there’s no telling how far he will go to improve his game.
Ronald Hohmann – a rising star from Oyster Bay
Ronald Hohmann may currently be the best player the LSU Tigers have on their roster this season. As the number one tennis recruit in the country in his graduating year this was to be expected, but before it all he was just a young boy who loved playing tennis.

He was born and raised in Oyster Bay, New York. He started playing tennis at four and instantly fell in love with the game. At the age of six he started training more regularly, for almost three hours a day, and regularly competed in tournaments to get better and improve his skills.

At 14, he moved to Florida to live and train with his coach on a more permanent basis. He admitted that it was not an easy decision to move away from his family in order to focus on his training, but moving to Florida and training at Todd Widom Tennis in Coral Springs was the best decision he could have made in pursuit of a professional career as an athlete and tennis player. He trained with his original coaches for six years as he developed his career as a pro junior tennis player.

He admitted that going pro was not always easy, “It took a lot of effort and discipline working towards my goals, and it depended a lot on the amount that I put into dedicating myself to the game. I had to make a few sacrifices but I was willing to go through all of that to make it, to go pro”.
Ronald Hohmann has wasted no time rising through the ranks
He began competing in professional tennis tournaments, starting with the Eddie Herr International Junior Championship, one of the largest international tennis tournaments, which he won at the age of 15. By the age of 16, he had won multiple national tournaments and also had the opportunity to train with renowned French tennis player, Gael Monfils. He spent years dedicating himself to the game and was rewarded with major wins.

A major highlight of his young career was winning the Adidas Easter Bowl singles tennis title at Indian Wells, California, at the age of 17. He was the first in the history of the Adidas Easter Bowl to win the tournament as a qualifier. This meant in order to win the tournament, he had to win nine matches in nine days to take the Gold ball in the Boys ITF 18-and-under division at the USTA Spring Nationals, and so he did. The win also gave him the opportunity to play in other big tennis tournaments including the U.S. OPEN Juniors tennis tournament.

Hohmann graduated high school as the number one tennis recruit in the U.S. in his graduating year. He now attends LSU and is currently ranked as the Tigers’ best player. He believes being mentally strong throughout each practice and match is key to becoming a great tennis player and this is what he tries to do every day during training and in every match. Like most professional athletes, he does not like to lose, but when he does, he tries to understand where he went wrong and how he will improve his game to beat his next opponent.
Roland Hohmann looks to the future
As a young, he is a talented tennis player that is only now beginning to embark on his journey as a professional in the sport. As a junior competitor, he has risen through the tennis ranks with some major wins, he quickly gained a reputation as one of the best tennis players of his generation, and is now making quite a name for himself at the LSU Tigers. He now wants to improve his professional ranking in upcoming seasons to prove that he has what it takes to be one of the best tennis players of his generation.