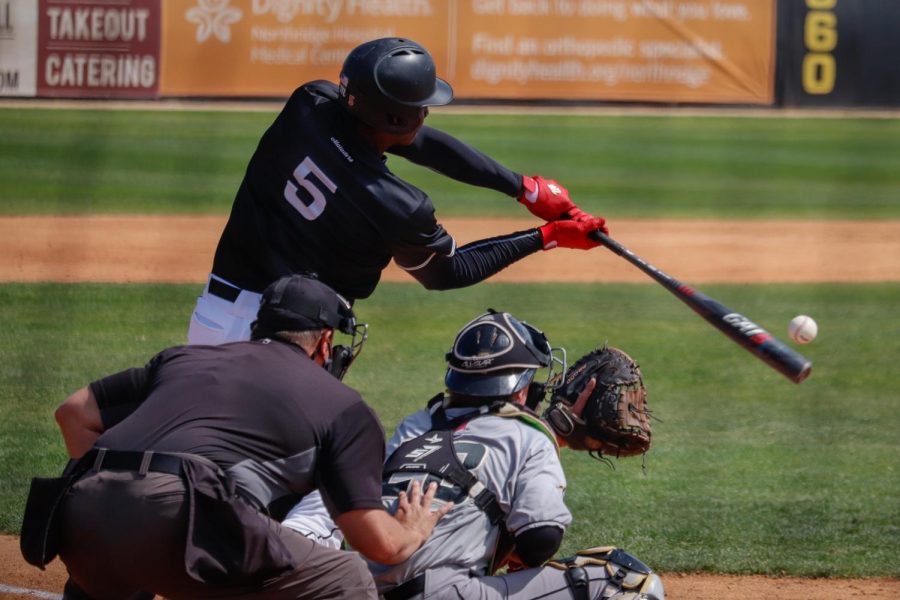 Center fielder Denzel Clarke hits an opposite field homer in the second inning to give the Matadors a 4-2 lead in a game against Cal Poly at Matador Field in Northridge, Calif., on Saturday, March 20, 2021. The Matadors picked up a 13-10 win in their first competitive game in 377 days.

It was the Matadors’ first game of the 2021 season and their first game that counted in 377 days after the 2020 season ended early due to the COVID-19 pandemic.

It started in the bottom of the first inning, Mustangs’ starting pitcher Drew Thorpe, who took the ball with a 2-0 Cal Poly lead, walked Matadors’ leadoff hitter Denzel Clarke.

Four pitchers, 14 walks and nearly four hours later, the Matadors set their hitting record for most walks in a nine inning game with 15. The previous record, 14 walks, happened during a game against Arizona State on Jan. 22, 1998.

Perhaps due to rust or nerves, the pitchers for both teams combined to walk 24 hitters in the Matadors’ 13-10 victory over the Cal Poly Mustangs.

“I think it was probably some emotions from the guys,” Matadors’ head coach Dave Serrano said after the game. “It’s different, it’s real, it counts now. We haven’t played in so long, we haven’t competed in so long.”

The Matadors’ used six pitchers who combined to allow 10 runs and nine walks.

“What we showed today was very uncharacteristic of what we’ve seen over the last month from our pitching staff,” Serrano said. “But it’s a learning experience and we’ll go back to the drawing board and fix some things.”

The biggest moment of the game for the Matadors came in the sixth inning. They went into the inning with a six-run lead that was cut to five when Nick DiCarlo hit a leadoff home run. Cal Poly followed that with a walk and two hit by pitches to load the bases with no outs.

Their next hitter, Myles Emmerson, hit a sacrifice fly to left field to cut the Matadors’ lead to four. With the momentum in favor of the Mustangs, Serrano turned to Blake Schriever, who is fourth on CSUN’s all-time saves list and is on the National Collegiate Baseball Writers Association Stopper of the Year watch list.

The move worked out for the Matadors as Schriever got the next two batters out with an infield fly and lineout to center. While Schriever got the job done, it was earlier than he’s used to pitching as the teams closer, which is a role he’ll go back to in the future, according to Serrano.

“It was kind of like a closing situation in the sixth inning,” Serrano said. “He just isn’t in prime shape yet and that’s why I didn’t want to use him at the end of the game, I wanted to use him earlier.”

On the other side of the ball, the Matadors’ offense carried them to victory. They had 11 hits, three homers, 13 RBIs and two stolen bases.

Clarke got them started early in the first after his leadoff walk. He then proceeded to steal second and third base and scored the Matadors’ first run of the season on an RBI single from catcher Sean Skelly.

Clarke also hit an opposite field two-run homer to give the Matadors a 4-2 lead in the second inning.

“I was just trying to be on time for the heater and adjust on anything else,” Clarke said. “So he threw me a fastball on the outer half and I took it. Then the next one was kind of up and away and I was able to put a good swing on it and it happened to fly over, so I was thankful for that.”

“It was a good day overall,” Clarke said. “It was nice to shake the cobwebs off with the boys, what’s it been a year since we were on the field together, so it’s just exciting to get back on the field and play again.”

Jayson Newman and Skelly also hit homers for the Matadors.

Blaine Traxel, who is scheduled to start on Monday, picked up the first save of the year for the Matadors. He went two innings and didn’t allow a run or hit while adding one strikeout and one walk.

“I didn’t plan on using him two innings,” Serrano said. “The plan was for one inning because today’s his throwing day, but we needed to get that first victory.”

This is the second straight season the Matadors have started 1-0 to begin the season under Serrano.

They’ll face the Mustangs again in a double header on Sunday with the first pitch of game one scheduled for 11 a.m. Zuko Tillman and Gavin Lizik are the Matadors’ scheduled starting pitchers.