Men’s volleyball pulls off upset victory against No. 12 UC Irvine 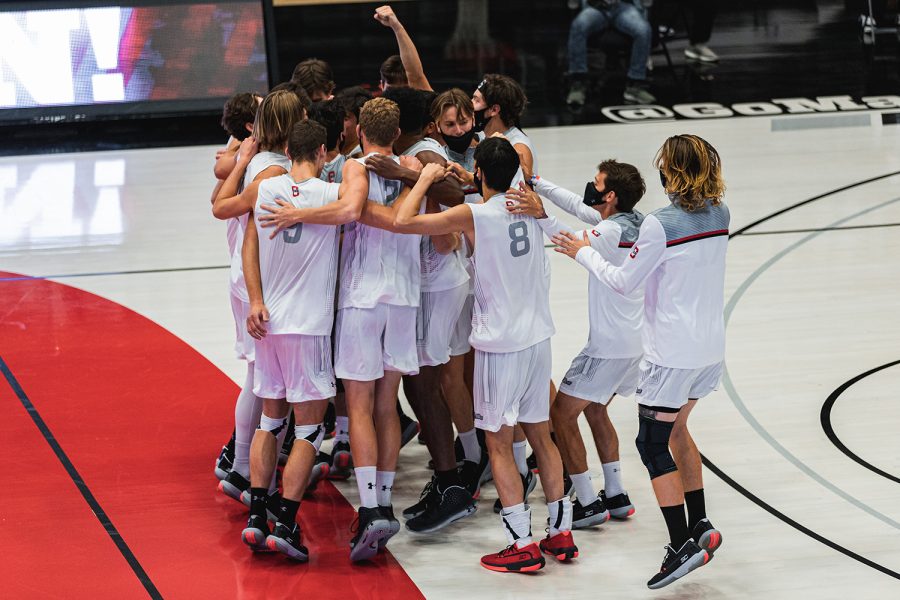 The CSUN mens volleyball team celebrate on the court after defeating the 12th ranked UC Irvine Anteaters in four sets at the Matadome in Northridge, Calif., on Sunday, March 21, 2021.

As the Anteaters’ spike attempt landed out of bounds and the final buzzer echoed throughout the Matadome, the CSUN men’s volleyball team stormed the court and hugged each other as if they won a championship match.

Not only was this an upset victory, the win was the Matadors’ first in more than a year since their season was canceled last March.

The unranked CSUN Matadors had their own March Madness moment with the men’s volleyball team gaining the upset victory against the nation’s 12th ranked team, the UC Irvine Anteaters.

Spike after spike, the Matadors put on a hitting exhibition with a total of 56 kills and four players ending in double digit kills.

CSUN head coach Jeff Campbell was impressed by his team’s ability to bounce back following a close loss to the Anteaters the night before.

“UC Irvine is a very good team and for us to play as well as we did against a really good team shows that we have good players,” Campbell said. “The work ethic was great tonight.”

The offense was led by sophomore Kyle Hobus, who led the Matadors in kills with 15, and sophomore Daniel Wetter, who had 13 kills with a hitting percentage of 93%.

Hobus said after struggling during Saturday’s match up, he and Campbell went over UC Irvine’s blocking and defensive schemes in order to bounce back from the loss.

“I was really able to use that time to change my numbers for this match and I think everyone else did the same,” said Hobus.

After splitting the first two sets, the Matadors dominated the third set with 15 kills to go along with 4 service aces resulting in a set score of 25-12.

CSUN continued their offensive onslaught in the fourth set winning 25-17 and sealing their victory against the 12th-ranked Anteaters.

The Matadors also benefited from UC Irvine’s sloppy play with eight reception errors compared to only one committed by CSUN.

After going more than a year with no competitive matches, Hobus said he and the team are thrilled to be back and playing at a high level.

Hobus also believes their team should be ranked this season and this win should garner respect from other teams in their conference.

“I think people kind of look down upon us as a team and I think we showed today that shouldn’t be the case,” said Hobus.

The Matadors will have a chance at another upset when they take on the third ranked UC Santa Barbara Gauchos on Friday.

“Santa Barbara is another really good team in the Big West,” Campbell said. “We’ll have a different game plan, but we need to be ready because they are very good.”