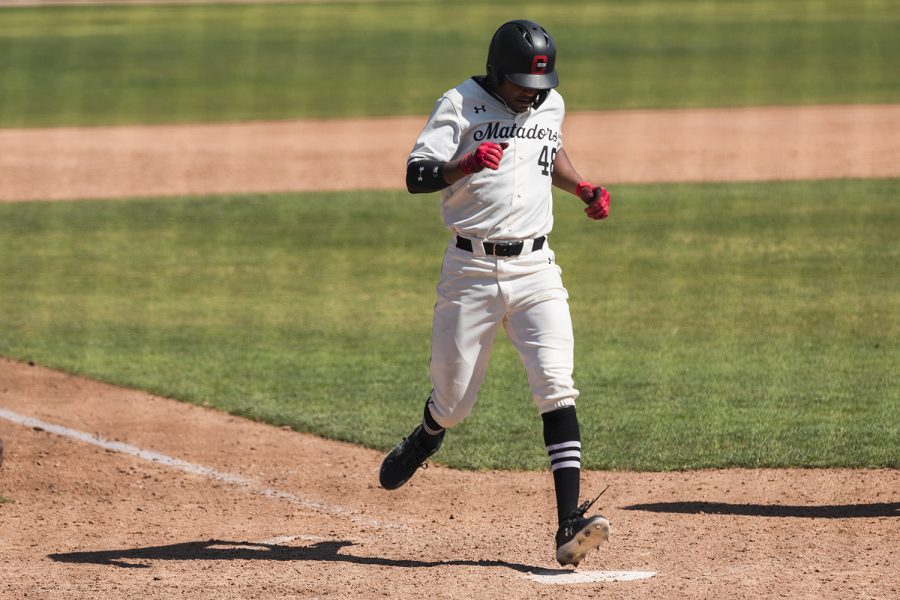 The final game of the series between CSUN and Cal Poly had yet another early offensive explosion between the two teams. In what felt like a replay of the first game of the season on Saturday, both teams came out scorching hot at the plate. But unlike Saturday’s game, the Matadors could not bring home the win on Sunday.

After giving up two early runs to Cal Poly, the Matadors put together a seven-run inning in the bottom of the first . The rally was capped off with a Denzel Clarke double that ran in two Matadors to build their lead to 7-2. That lead did not last for long as the Mustangs scored six runs the very next inning to retake the lead at 8-7.

During the third inning, freshman infielder Ryan Ball reached base on a fielder’s choice that scored redshirt senior outfielder Robert Bullard to tie the game at 8-8. Again, the Matadors relinquished the lead when Cal Poly scored two unearned runs off redshirt junior reliever Chad Wilson during the fifth inning to put them ahead for the remainder of the game.

After giving up eight runs in the first two innings, starting pitcher Blaine Traxel did not surrender a single run for the remainder of his outing. In both the third and fourth innings, he stranded two Cal Poly runners on base.

“As I shared with the team, you look at Traxel’s line, it wasn’t great, he gave up some runs and some hits,” said CSUN head coach Dave Serrano. “But I’ll take the fight he had on the mound all day long because that was mental toughness, he kept fighting and fighting.”

Relievers Jayson Newman and Blake Schriever both pitched hitless frames, but it was not enough as CSUN could not seem to get their bats going after a hot start to the game.

The Matadors’ best chance came in the seventh inning after a Jose Ruiz single to right field. That was then followed by a single to left field by Kai Moody. CSUN could not capitalize on the opportunity as Cal Poly’s Kyle Scott worked out of the jam.

Drew Thorpe came out of the Cal Poly bullpen to retire the Matadors in the ninth to secure the win.

Utility player Kai Moody led the Matadors at the plate with three hits, one run and one RBI. He was joined by infielder Carlos Arellano who had two hits, one run and two RBIs. Moody and Denzel Clarke are still the only Matadors to reach base safely in every game this season.