Amid the hype surrounding him, Denzel Clarke keeps his eyes on the prize 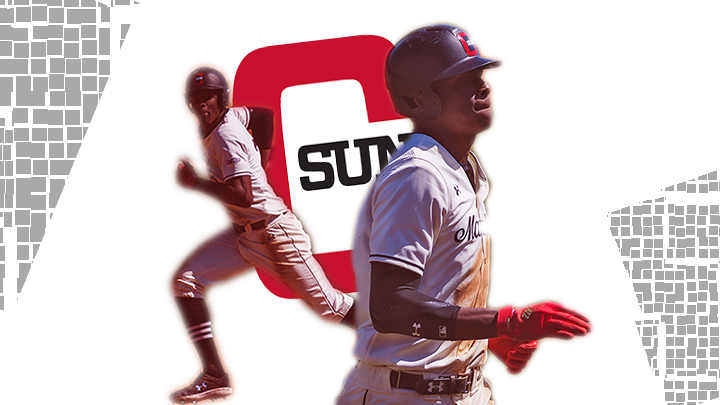 Denzel Clarke got a notification while he waited with his teammates to board a flight to British Columbia for a tournament. He looked down at his phone — it was a text from a scout for the New York Mets.

Clarke had just found out he was drafted in the 36th round of the 2018 MLB Entry Draft. In that moment, he was able to see all his hard work come together into one of the greatest honors of his life.

Only about 1,200 amateur baseball players, less than one tenth of eligible college players and less than 1% of eligible high school players, are drafted by an MLB team every year. While many players might have bragged, Clarke thanked the scout via text and kept quiet about it. His teammates didn’t find out until his coach saw the news online and congratulated him.

Despite the appeal of going pro and signing with the Mets organization, Clarke decided the best path for his career was to take the college route at CSUN. He felt the coaching staff had a “really great vibe,” which was inviting to him. The weather was also a plus for him and he had family and friends in the area that could support him.

“Overall, it was just a really great fit,” Clarke said.

One of his main advisors during the process of deciding his next steps was Greg Hamilton, who coached Clarke on Canada’s Junior National Team in 2017 and 2018.

Clarke already had the athletic profile and defensive ability to play professional baseball, according to Hamilton, but more time to improve his swing and work on his offensive game would allow him to take his game to the next level. Going to college would allow him the time to develop and mature as a hitter.

“He’s one of those players that if the bat does come around, certainly the defense is plus-plus at the professional side, so the sky’s the limit when the bat starts to play,” Hamilton said.

The national team traveled throughout the United States and Domincan Republic, facing other countries’ junior national teams enroute to the bronze medal game during the 2018 season. While they ended up losing to Japan and finishing fourth in the tournament, Clarke was proud and felt honored just to play with his country’s name on the front of his uniform.

The decision to go to school instead of signing has paid off for him so far. Clarke said he has been able to use his time at CSUN to continue his development while meeting more players and coaches, and making new friends.

When Jeremy Hassel, one of the Matadors’ pitchers, found out he would be rooming with Clarke at CSUN, he was excited to meet him. Hassel expected Clarke to be talkative and energetic like many other top players. But when Hassel first met him in their apartment, he found it would take some work to find that side of Clarke.

“He walked into the door, said ‘Hi, my name is Denzel.’ I shook his hand and he walked away,” Hassel said. “He was super, super reserved.”

After about a month of trying to crack him, Hassel did discover the side of Clarke’s personality that he originally expected to meet.

“Once you get to know the guy, he just won’t shut up,” Hassel said jokingly. “He’s easily one of the best guys you’ll meet, just an overall great person.”

Clarke started playing baseball at age 10, and by 16, he was playing at a highly competitive level. He comes from an athletic family with two cousins, Josh and Noah Naylor, already playing professional baseball and his mother Donna Clarke competed in the 1984 Summer Olympics. Clarke has leaned on them for advice on his own path and development as an athlete.

Now in his junior year, Clarke is ranked 82nd on the top 100 draft prospects list and 12th on the top 100 outfielder list by D1 Baseball — a major jump from being taken in the 36th round just a few years ago. D1 Baseball also named him the 2021 Preseason Big West Player of the Year.

“I’ve never seen a guy move the same way that he can on the field,” Hassel said. “I haven’t seen anybody that we’ve played against that has the same skills that he does.”

Scouts have compared him to MLB stars such as Lorenzo Cain, Adam Jones, and Hall of Famer Andre Dawson. His coaches rave about his athleticism, his defensive ability and the extra gear he can bring to an offense with his baserunning ability and developing power.

“When he gets up to full speed, it’s graceful, it’s effortless and it’s a whole lot of fun to watch,” Hamilton said.

Inside the clubhouse and dugout with his calm yet fun demeanor, Clarke has the personality that every team needs through the ups and downs of a long season. Hamilton said Clarke is great with the banter that goes on in the clubhouse and is accepting of coaching.

“Denzel is just a very fun-loving guy. He’s always got a smile on his face,” Matadors’ head coach Dave Serrano said. “And I think that’s the biggest thing I’ve seen some growth with him. He’s still that fun-loving guy, but I believe he’s matured more now as he’s gotten older and been around.”

Despite the hype surrounding him, Clarke is just trying to keep the same mindset he always has: trusting himself, his abilities, his work ethic, and focusing on the main goal — winning.

“It’s cool that there’s noise, but honestly, I gotta shut all that out and just go out, head down, and play to help my team win,” Clarke said. “Regardless of whether it’s a shortened season or not, we’re coming out to win. So however I can help the team best is what I’m going to do.”

“It’s always cool getting off to a good start but honestly, I felt like I could improve even more so,” Clarke said. “It was unfortunate when the season got cut short, but there is definitely a lot I learned within 15 games.”

Clarke used his time off to continue training and staying in shape so he could be ready for a return to the diamond. He also spent a lot of his newfound time drawing whatever inspired him that day or watching shows such as “Avatar: The Last Airbender” and “Attack on Titan.”

Now, nearly a year after his sophomore season was canceled, he can’t wait to get back on the field to compete with his teammates. Clarke is expected to take on a leadership role while playing center field every game and hitting at the top of the lineup, according to Serrano.

Clarke enters this season as a player who is once again eligible for the MLB Draft in July. If he just keeps getting reps and working on his game every day, then the sky’s the limit with how far Clarke can go, according to Serrano. However, Clarke isn’t focused on the draft just yet.

“I’m just gonna work hard at school, work hard at baseball, and do my best work on and off the field,” Clarke said. “And at the end of the day, God will present to me the best decision.”