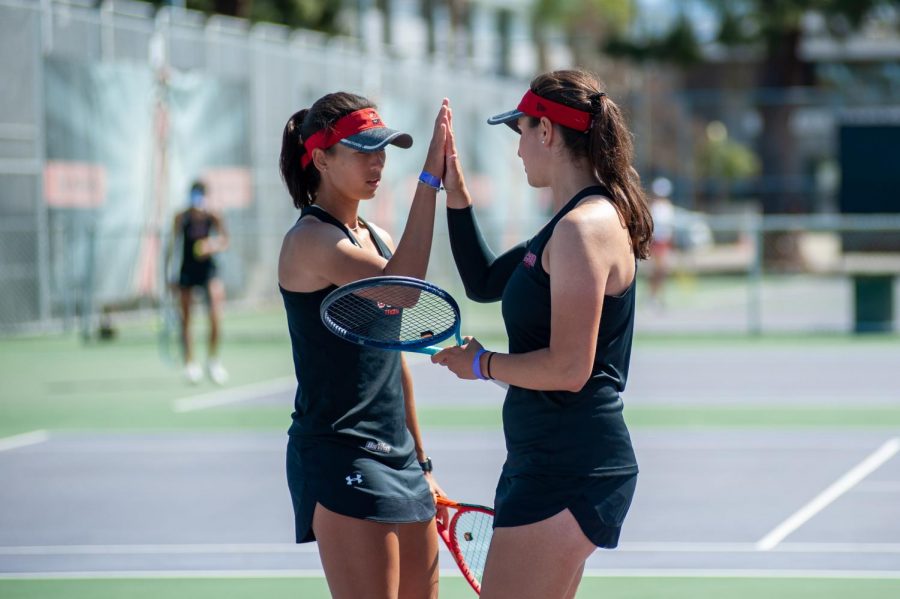 Doubles partners Jolene Coetzee, left, and Ana Toboso, right, celebrate during their doubles matchup against the Santa Clara Broncos at the Matador Tennis Complex in Northridge, Calif., on Saturday, March 27, 2021.

As spring temperatures started to rise in sunny Los Angeles this past weekend, the women’s tennis team kept themselves cool and calm under pressure in their matchups against Santa Clara and UC Davis.

The match against Santa Clara University on Saturday proved the Matadors’ resilience , despite having the team’s No.1, Ekaterina Repina and No.5, Jacquie Tan, out during singles.

“Two of us are not playing but I believe in every other player”” Repina said. “I think all of them play really good and I hope today is our winning day.” The pair lost their doubles set, 3-1, against JennaMarie Gordon and Giulia Hayer of Santa Clara Broncos.

The singles matches told a different story. Grunts of frustration in between CSUN serves were met with supportive words from teammates across the courts to keep the positive energy flowing throughout the warm afternoon’s battle.

The first to finish was sophomore Sasha Turchak, who won both sets 6-2 against Hayer. Turchak’s victory “set the tone” for the Matadors’ continued victory streak, according to head coach Gary Victor.

“I think we shook off doubles very well, which really speaks to the mental toughness of the team,” said Victor. “[Turchak] played so well that it set the tone for us that ‘yeah, we can do this!’”

Named Big West player of the week on March 17, junior Jolene Coetzee continued the trend by outscoring her opponent first in a 6-3 set, followed by a lengthier but just as victorious 7-5 set. As a veteran on CSUN’s Women’s tennis, Coetzee was able to use her strengths and her opponent’s weaknesses to secure a win during her match.

“She would go for big shots and risk a lot. From my mentality, as long as I kept making a lot of balls, I knew she was going to miss eventually or she’s going to go risky and miss,” Coetzee said. “There were some ups and downs mentally because I was kind of down in the beginning and I didn’t get the best start, but I just fought through and stayed mentally tough.”

Freshman Magdalena Hedrzak won both of her sets as well, with Victor providing feedback and tips in between sets.

Teammates gathered around the remaining matches, cheering on Victoria Santibanez Luna, Ana Isabel Fraile Toboso and Jenna Dorian, who continued to fight under the blistering sun.

Dorian’s long yet satisfying match clinched CSUN’s win against Santa Clara. She first defeated her opponent in a 7-6 set, followed by dominating in the second set with a 6-3 victory over Santa Clara’s Varya Zlotnik.

“There were some tough moments. The first set was definitely a battle and then in the second set I got some momentum. It was a very long, hot, tough match, but it went pretty well.” Dorian said, happy about her first clinch for the Matadors.

Fraile Toboso’s and Santibanez Luna’s sets went unfinished as CSUN’s 4-3 win earned them the victory. Victor hoped to keep the momentum going for the second match of their back-to-back duals of the weekend against the Aggies on Sunday afternoon.

“We need to build on the positive flow that we’re going in the right direction and hopefully we’ll be able to bring it tomorrow with the same good energy,” Victor said. “We try to do our best in every single match. Today we were short handed but we still figured it out and it feels good.”

The duel against Big West Conference competitor UC Davis proved successful in more than one way. The match marked the return of Repina and Tan competing in singles matches, where they each dominated their opponent.

After Turchak and Fraile Toboso claimed victory during their matches, Tan secured her own victory against Olive Maunupau of UC Davis after taking control of the match. She first outscored Maunupau 6-1 in the first set, then 6-0 in the second set.

Repina clinched Sunday’s win by defeating UC Davis senior Sara Tsukamoto with an identical score of 6-2 after both sets.

The successful weekend for the Matadors women’s tennis team marked Victor’s 300th and 301st career wins during his 24 seasons with CSUN.

“This team makes coaching fun — they are about integrity, discipline, caring for each other and strong loyalty,” Victor said in a press release from CSUN Athletics.