CSUN softball goes one for three in series against Hawai’i 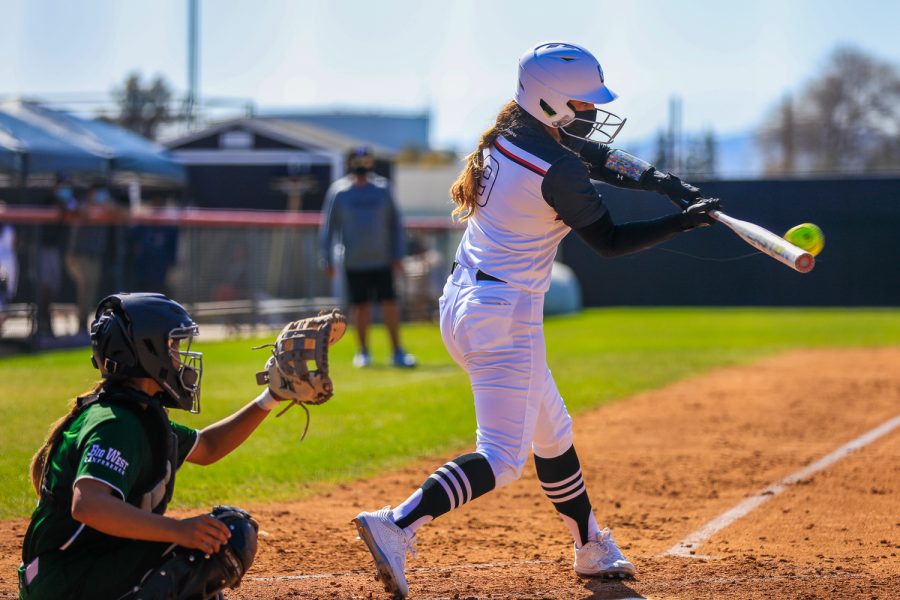 Sami Garcia gets a hit during a game against the Hawai'i Rainbow Wahine at the Matador Diamond Softball Field in Northridge, Calif. on Friday, March 26, 2021. The Matadors lost the first game of the series 5-1.

CSUN played their first home series of the season last weekend against the Hawai’i Rainbow Wahine — the first time these two teams met since May 2019. It was a rollercoaster series for the Matadors, as they lost the first two games but made a huge comeback to win the third and final game of the series.

Game One
Senior Kenedee Jamerson was the starting pitcher for the opening game. At the top of the first inning, Hawai’i shortstop Nawai Kaupe hit one to centerfield and brought in outfielder Brittnee Rossi, scoring the first run for Hawai’i. During the bottom of the first inning, the Matadors had an opportunity to take the lead as the bases were loaded with two outs, but it didn’t happen as Jaclyn Silva struck out.

At the top of the third inning, freshman pitcher Eryka Gonzales made her home debut as she struck out Betha. Later in the inning, CSUN’s second basemen Alexis Lemus started off with a double. Savannah Favre made a single hit, which led Lemus to run to third base. Jaymi Steward tied up the game to 1-1 when she hit a single which had brought Lemus to home plate.

“Jaclyn did a great job starting up,” Coach Charlotte Morgan said. “She’s young and still learning the game. The catchers got to do better, we can not give them free bases.”

During the top of the fifth inning, Ka’ena Kelinoi approached the plate with Kaupe on third base for the Rainbow Wahine. An error by Silva caused Kaupe to take advantage of an error by Silva and ran to home plate, giving Hawai’i the lead 1-2. Maya Nakamura later brought Kelinoi home on a single to expand the Wahine lead to 1-3.

In the bottom of the fifth inning, Steward approached the plate as she felt the pressure to bring in an RBI, she made a single hit between first and second. Hawai’i’s first error occurred when second baseman Rachel Sabourin missed the ball, which resulted in the bases being loaded. However, the Matadors still fell short as Hawai’i got the third out on Jamerson.

In the top of the seventh inning, Somoa hit a single towards the left outfield that brought in two RBI’s.The Rainbow Wahine took the win for the first game of the series against the Matadors on Friday, 5-1.
Game Two

After a tough loss, the Matadors were looking forward to making a huge comeback against Hawai’i during the doubleheader on Saturday.

That wasn’t the case in the doubleheader’s first game, as Hawai’i defeated the Matadors 12-0.

For the first game of the day, Jamerson opened the game once again as she was the starter pitcher.

In the bottom of the second inning, Lemus impressed everyone with her speed as she kept stealing bases in order to tie up the game. The Hawai’i defense wouldn’t allow it as they made sure to end the inning with no runs.

CSUN made their first error of the day as right outfielder Sami Garcia failed to catch Rossi’s fly ball toward the right field. Rossi ran all the way to home plate, making it 3-0.

Meanwhile, Jamerson tried to stay positive for the girls as she motivated the girls not to give up.

“When you get into games sometimes there’s other factors and if I could be that person to lift somebody up and help them focus on the game that’s what I try to do,” said Jamerson. “It’s not just me I have so many other teammates who pick me up as well. Our focus is we try to control our controllables and fix things that could be fixed. One of them is energy.”

Hawai’i ended up winning the game 12-0, giving Rainbow Wahine the 2-0 lead in the series.

“After that first game all you could say is let it go,” Morgan said. “After 12 runs and 16 hits there’s nothing much you can say, just let it go.”
Game 3
The Matadors made a comeback, which led them to win game three of the series 4-3. During game two of the day, freshman Gonzales pitched throughout the game with three strikeouts — of which two were consecutive strikeouts at the top of the second inning.

At the top of the seventh inning, with Hawai’i still in the lead, Gonzales walked Gandi-Mak to first base. An incredible double play was made by Swan, Lemus and Jamerson that ended the inning.

As the Matadors approached the bottom of the seventh inning they had a last shot to turn things around. With Lemus on second and Favre on first with one out, Steward hit a single towards right outfield, bringing in an RBI as Lemus ran to home plate making it 3-3. Favre made it to third base and Steward to second. Jamerson stepped to the plate as she made a single hit which brought Favre home and made the Matadors win their first home game.

“I think they did a great job, I challenged them to lead the ball on the last game,” says Coach Morgan. “Not to hang on to what just happened. Even though Hawai’i got ahead of us, we responded. I’ve always told them to keep fighting, their energy was great.”

The Matadors will play against Long Beach State at the Matador Diamond field at 1 p.m on Friday.