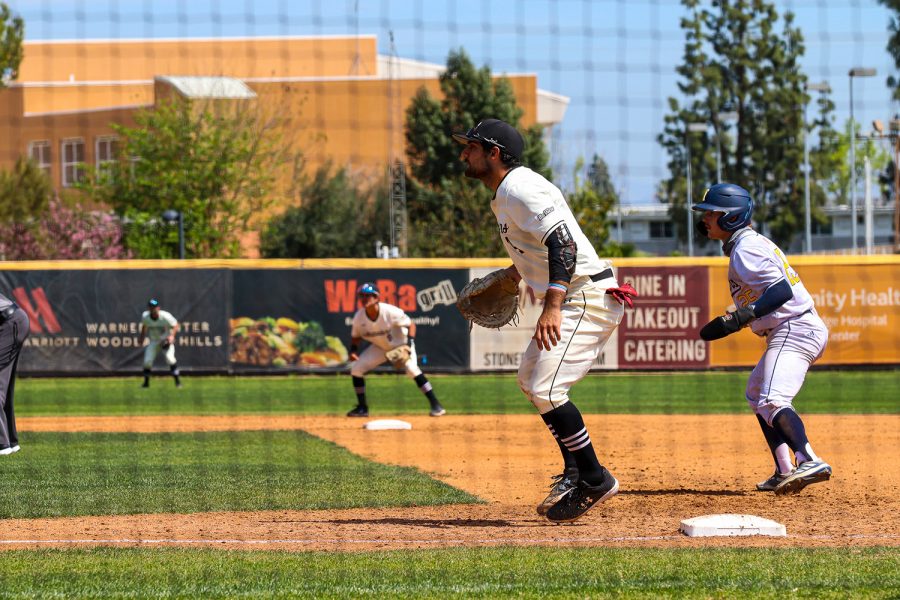 Jason Ajamian protects first base during the second game of the series against UC Irvine at Matador Field in Northridge, Calif., on Saturday, April 3, 2021.

The Matadors struggled to get innings from the bullpen after a twelve-inning battle in game one, leading to a lopsided game two where UC Irvine Anteaters got the best of CSUN’s bullpen in a 17-3 loss on Saturday.

The first game of the series was postponed due to darkness on Friday night and continued at noon on Saturday, forcing the doubleheader scheduled for Saturday to move to Sunday.

The continuation of last night’s 7-7 tie ended in the 12th inning when freshman infielder Ryan Ball crushed a payoff pitch in the strike zone for a solo home run on the final out of the inning, forcing a walk-off and bringing the Matador bench to home plate to celebrate the freshmen’s massive hit to right-field. The Matadors’ win also gave the Anteaters their first conference loss of the season.

In the second game of their four-game series, the Matadors struggled to contain the bats of the Anteaters with the game ending early in just seven innings due to the margin of UCI’s lead.

“It seems that we are surprised that we are winning. This is the third time we have won the opener and lost the next game in the series,” said head coach Dave Serrano. “We are getting too excited. I talk a lot about relaxed intensity. We can’t play with emotion, we left it all on the field after the first game.”

In game two, the Anteaters gave junior left-handed pitcher Zuko Tillman a tough day on the mound. Tillman conceded four runs in the first inning and six more in the second, having trouble with the command of his pitches. Tillman pitched 1 2/3 innings with nine hits, three walks on 10 earned runs and one strikeout.

The Matadors fought back in the first by getting three runs of their own. A leadoff single on an error at third base gave junior outfielder Denzel Clark a single to start the day at the plate for the Matadors. Senior outfielder Kai Moody hit a single in the two-spot and a walk from Ryan Ball loaded the bases on just the first three at-bats.

The single from Moody continued his perfect season hitting-streak, reaching double digits now in his 10th straight game with at least one hit.

A two RBI single from designated hitter Sean Skelly brought in two runs, while senior first baseman Jason Ajamian hit an RBI single to cap the scoring for the Matadors for the afternoon in the first inning.

UCI’s freshman left-handed pitcher Nick Pinto, who was Big West Conference Player of the Week from two weeks ago, got the start for the Anteaters. Pinto got off to a rocky start after allowing three runs and two earned runs in total.

Despite his slow start, Pinto finished the day going five innings and taming the Matadors for the rest of his pitching appearance with five hits, two walks and four strikeouts. Junior right-handed pitcher Michael Stanford came in relief and conceded just a single hit in two innings with two walks and two strikeouts.

“There were highs and lows over the course of the two games,” said Serrano. “Right now we’re not handling success well. [Today] we were trailing in everything today and not getting hits.”

Junior right-handed pitcher Dwayne Angebrandt came in to relieve Tillman in the second in a bases-loaded situation. Angebrandt went the distance for CSUN pitching 4 1/3 innings while conceding six earned runs on nine hits with one strikeout.

While allowing six runners to score, Angebrandt served as the bridge to keep the Matadors’ pitching staff ready and healthy for tomorrow’s doubleheader and the final two games of the series.

“Runs are a lack of conviction to the strike zone. Throwing strikes is the key to success,” said Serrano. “We know [Matador Field] is an offensive ballpark and it’s hurting us that we implode on the mound when we don’t win games.”

CSUN will play the final two games in the doubleheader Sunday at 11 am.