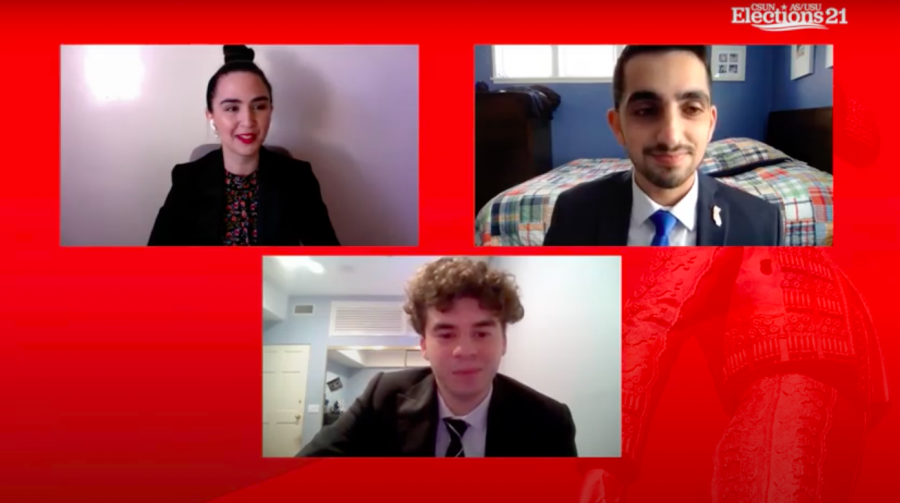 Associated Students hosted an AS Presidential and Vice Presidential debate on Wednesday via their YouTube page.

Presidential candidates’ opening statements
AS Attorney General Jacob Akopnik is a political science major running for AS president with the slate Rise Above. He has participated in 10 organizations on campus and he wants to focus on helping students as their primary advocate. Rise Above acknowledges all the hardships students have been through and Akopnik said it’s about coming together to rise above the challenges.

“Our slate has learned that many of the ideas that most of us want already exist in some form. But here’s the problem, most of us have no clue how to access these opportunities. That’s where our pillars come in: inclusivity, outreach and community,” Akopnik said.

He acknowledged that AS has failed to reach out and listen to students and have also failed to connect students to campus resources and programs.

“I am committed to making sure your needs are met, whether it is financially, socially or mentally,” Hay said.

Question and answer for presidential candidates:
If elected president what would be the first thing you would like to accomplish and why?
Akopnik’s first act if elected president is to write legislative referrals immediately. A referral is a form submitted to Associated Students to address a campus or community topic on the senate floor. He said presidential candidates make promises, such as creating more event nights, free parking spots and other basic needs on campus, that ultimately go unfulfilled as candidates take too long to start on the referrals.

Akopnik said he has seen this happen every year since he started AS during his freshman year. AS leaders will either introduce referrals too late in the semester or they will submit a referral during the spring semester when most of the senators are focused on the upcoming election.

Hay’s first priority is listening to students’ voices to address their needs. He wants to hear from students about their online learning experience to determine what worked and what did not. Hay plans to listen to students through town hall meetings and AS Instagram Live broadcasts.

Akopnik plans to reach out to students directly instead of waiting for students to attend a town hall, since there are students who might not know when and where the town halls occur.

In response to Akopnik, Hay stated he has hosted town halls in the past and remembered a student who told him they felt represented by their senators.
On addressing students’ concerns with diversifying faculty amid the appointment of President Erika D. Beck, who is white.
Hay wants to ensure students are aware of their new university president and to create a streamlined process for students to communicate with AS, Beck, the provost and the university’s deans about their concerns. .

Hay suggested putting in the proper training and scouting procedures in place to hire diverse faculty to address students’ concerns.

Akopnik acknowledged the disappointment that the current CSUN president is a white woman yet again, and that two white males running for AS president.

“I have gotten to know Dr. Beck and I think she’s great but I also see how students want someone who looks like them and actually represents them,” Akopnik said. He said there needs to be diverse faculties and student leaders.
On how they will use the AS budget to support students’ needs
Akopnik wants to first figure out which clubs and organizations need help. He said AS acts as the middleman by taking the money that comes from student fees and allocating it to projects or events. He said change can only be made by listening to students who ask for financial support for items such as book vouchers and scholarships.

Akopnik said he wants to make the Code of Finance more accessible, because the language may be difficult for students to understand how the AS budget is distributed. The Code of Finance explains the procedure of how funding is distributed across different types of expenses, such as clubs and organisations, travel and campus events.

Hay wants to create a philanthropy fund for clubs and organizations. This fund will help to finance charity events or items that the Code of Finance does not cover, such as food, music and club apparel.

He also wants to expand CSUN’s book voucher program. Currently, CSUN offers 10 scholarships to students who cannot afford books and school materials. Last semester, the University Student Union used the excess enrollment funds to pay for students’ books and materials. During the debate, Hay said the USU had received over 600 applicants. (Hay clarified through a follow-up email that according to AS Executive Director Patrick Bailey, 1,019 out of 1,021 applications received scholarship funding.)

Hay wants to increase the number of scholarships from 10 to 500. He plans to share information about the program with students, so they know that this resource is available.

Hay also wants to increase job opportunities on campus for students by creating an accessible form that lists available job positions, its requirements and if the jobs are on campus or work-from-home.

Hay also wants students to know about mental health services and basic needs resources that are available to them.

In response to Hay’s plan, Akopnik said the book voucher already exists. “It’s all about outreach. This stuff already exists. There’s no point in wasting our time in trying to reinvent things when we can just push it out more and actually tell students this exists,” Akopnik said.

Hay responded that the job of AS is to create new resources and programs that cater to students’ needs.
On what candidates plan to do to make the concerns of Black, Indigenous and people of color heard
Hay said he developed AS resolutions condemning anti-semitism, anti-Asian hate and white supremacy. He believes it is important to let students know that AS stands with them, but he acknowledged that the administration has failed to show students they are being supported. Hay said one Instagram post and statement from the president is not enough. He plans to host events and create safe spaces for students to speak out.

Hay said what separates himself from the current and past administrations is making sure they’re [Hay and his team] taking action. He wants to prevent hate on campus by listening to the students and addressing their concerns head on.

Akopnik said he attended these protests and that he loves that the majority of the student population is diverse. He said diverse students are not being heard.

Akopnik plans to create more anti-bias training for professors and to create inclusive training that a person cannot skim through.

Akopnik also wants to focus on AB 1460 — which requires California State University students to complete a three-unit ethnic studies class in order to graduate — and make sure it is being implemented and working smoothly. In October, the Faculty Senate passed a resolution that opposes the CSU Chancellor’s implementation of AB 1460, citing their main concern about the lack of consultation with the CSU Council of Ethnic Studies on the bill.

He wants to address inequitable funding for ethnic studies departments. While he acknowledged that he is not a member of an underrepresented community, Akopnik said he wants to learn about the students’ experiences, what on-campus cultural houses and centers offer, and how AS can better serve these communities.
Vice presidential candidates’ opening statements:
Kaitlyn Orozco is a first-generation student majoring in speech language pathology and audiology. She is running for AS vice president alongside candidate Hay.

“Jonathan and I are ready and more than capable of making this campus more inclusive and supportive environment for all Matadors attending so that way they can reach their fullest potential,” Orozco said.

AS Chief of Staff Kayla Simpkins is a psychology major running for vice president along with presidential candidate Akopnik.

“It is time to build a brand new and brighter CSUN community where current and future Matadors don’t just see CSUN as a backup school, but instead walk out of it stronger, confident and ready to take on any challenge,” Simpkins said.
On what candidates will do to make students from the Asian community feel safe and welcome on campus after the spike in anti-Asian violence.
Simpkins said it is important to create an environment where students feel comfortable addressing their needs.

“As a woman of color, it’s hard to even get into spaces where we feel like ‘I am supported and people are actually listening to me,’” Simpkins said.

To provide support for students, Rise Above will host consistent town halls with students. Simpkins suggested creating a forum on the CSUN app where students can talk to other students and to help them feel comfortable.

Orozco said to make students feel safe and welcomed on campus she wants to listen to student feedback and address students across different ethnicities and backgrounds, so that they are being heard. She said it is crucial to amplify students’ voices, especially those who are experiencing racial discrimination.
On how candidates’ administration will tackle a return to campus despite students’ hesitancy due to the COVID-19 pandemic.
Orozco said their number one priority is making students feel comfortable. She suggested asking students what they need through student feedback. Through this method, students can share if they prefer hybrid classes to online classes, or share their opinions on the maximum capacity for classrooms and buildings.

“Being at CSUN should be a home for all that are attending,” Orozco said.

Simpkins said students might not know about the resources and opportunities being offered on campus. Rise Above’s pillar of outreach is to inform students about resources that are available such as the Oasis Center, University Counseling Services, tutoring services and the Disability Resources and Educational Resources department.

“I think it is important that students know about them but also feel safe to even walk into these spaces without being judged and feel included,” Simpkins said.

Orozco suggested hosting office hours and creating an anonymous box where students can address their concerns, since there might be students who do not want to reveal their identities. Through this solution, students can have the opportunity to voice their opinion without any fears.

Simpkins responded by saying the AS holds office hours where they speak with students in private. She also plans to create a community in which students can support other students.

Presidential candidates’ closing statements
Hay closed his comments by recounting how he tried and failed to become a senator as a freshman, and eventually becoming a senator for the College of Business and Economics, where he worked with students and the various leaders in this college. He said his persistence as a senator will continue once he is president.

“Now I want to make sure every student on our campus has the opportunity to have their voices heard,” Hay said. “If elected I am committing a portion of my presidential salary back to students scholarships.”

Akopnik thanked his fellow Matadors for helping him to discover his potential and guaranteed that Rise Above will not let them down.

He said he will make sure students are included in conversations and will have every opportunity afforded to them that is offered by the university.

The voting period will be from April 6-7. Students will receive their personalized ballots via their CSUN emails. To watch the recorded debate, visit the CSUN AS Youtube page.