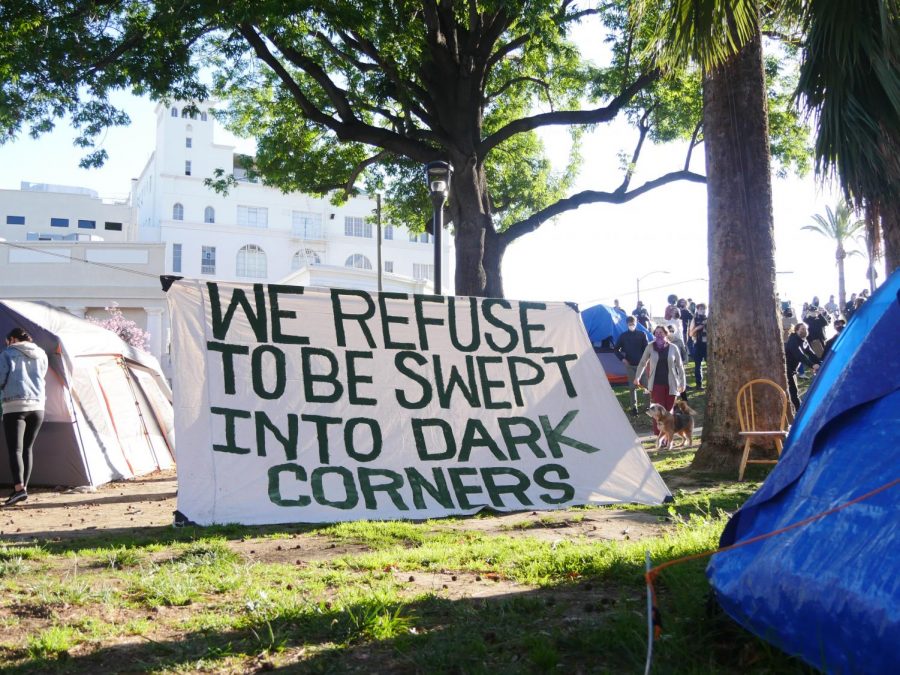 A sign hanging in the encampment at Echo Park Lake in Los Angeles, Calif. on Wednesday, March 24, 2021.

It was seven in the morning when activists began to gather at Echo Park Lake on March 24. They were there to pass out water at the park’s commune-like encampment and help organize belongings as dozens of unhoused Angelenos who lived there prepared to lose their homes.

The answer came that night when over 100 Los Angeles Police Department officers descended on a crowd of peaceful protesters who had gathered to defend the unhoused residents in the park. Two days of protests surrounding Echo Park resulted in 182 arrests of protesters, unhoused community members and journalists, a broken arm, and troubling questions about the future of those who called the park home.

A day prior to the protests, the L.A. Times had confirmed rumors that the city was planning to clear out encampment and close the park for what City Councilmember Mitch O’Farrell said was over $600,000 worth in repairs. The hashtag #EchoParkRiseUp was trending locally on Twitter, where activists raised awareness about the sweep.

Some of those who lived in the park spoke to the crowd of about 100 people and the makeshift pool of reporters who held out microphones and notepads.

“[We’re] a family of homeless people,” said Valerie Zeller, a woman who lives at the park with her newlywed husband, whom she married at the encampment. “There’s nowhere else like this. It’s heaven on Earth.”

The housing crisis in Los Angeles has intensified during the COVID-19 pandemic, particularly in large encampments like the one in Echo Park, where Center of Disease Control and Prevention guidelines like social distancing and keeping the area sanitized are difficult to adhere to.

Local neighborhood groups have voiced discomfort with the encampment in the park for months and members of neighborhood Facebook groups complained of drug use and unsanitary conditions in the park.

During the March 24 gathering, a woman holding a baseball bat who said she was a resident of the area suddenly walked into the edges of the crowd.

“This is my house,” the woman said to the crowd gathered around her.

“This is our home, too,” someone replied.

After an intense few minutes, the woman slunk away from the crowd. The entire March 24 event was punctuated by similar brief moments of aggression.

Ayman Ahmed, who lived in the park and became a leader for the group, pushed back against area residents complaining about cleanliness.

Residents of the park have been warned that the park would be closed for repairs once everyone living there was offered housing through Project Roomkey and Project Homekey — efforts by the city of L.A. and the state of California to provide temporary housing.

However, people who took housing in Project Roomkey have reported being confined to their rooms, losing possessions and not being able to go outdoors for fresh air.

Jessica Mendez, an unhoused woman who calls herself “The Queen of Echo Park,” said that she is apprehensive about the city’s housing efforts. She moved to the park after costs from a car crash overwhelmed her.

“To be honest, this room project worked for some people, but it’s not going to work for everybody,” said Mendez, who has been living in Echo Park for 30 years.

Activists and the park’s residents consistently pushed back against projects Roomkey and Homekey, and tried to negotiate a compromise with city and state officials.

“If you’ve been homeless and you’ve been through the shelter system, you’re aware that the things that they promise you don’t always pan out to be that,” said David Busch-Lilly, a resident at the Echo Park Lake encampment since August.

“They might take away your pets. They might refuse to let you even visit with your partner for even three hours a day. There are unsanitary conditions. There are programs that if you don’t advance in their system, they conveniently cycle you back out to the streets,” said Busch-Lilly, who has been unhoused for 20 years.

David Blumenkrantz, a journalism professor at CSUN who studies homelessness and produced a magazine with journalism students about homelessness in Los Angeles, also had doubts about the city’s housing efforts.

“One of the big issues is that the official statement said everyone who wanted to be housed was housed. When you take a closer look, you’ll find that a) it’s not true, b) Project Roomkey is riddled with flaws,” Blumenkrantz said.

Los Angeles Police Department officers began staging near Dodger Stadium later that evening. Hours later, a group of about 100 protesters gathered at the park as city officials began to put up fences and shut the park down. According to Mayor Eric Garcetti, only about six unhoused people remained in the park at this point.

As the crowd rallied on Glendale Boulevard, LAPD officers slowly began to close in on the protesters.

It is an incredibly tense scene between protestors, reporters, and LAPD officers. An unhoused resident who lived in Echo Park was speaking to an LAPD officer. Many people are saying “fuck Rampart,” referring to the Rampart division, which has a lengthy history of controversy. pic.twitter.com/0B5KLq3qfO

Reporters scrambled to document the scene, moving with the crowd and standing near the front of the skirmish line. Officers responded aggressively as lights from reporters and protesters shined in their faces.

Multiple dispersal orders were given after the crowd had been pushed down the street.

“If you flash that camera at my eyes, I will smack your camera,” an LAPD officer said to a journalist photographing them. “Is that a threat?” the reporter asked. “It’s a promise,” the officer replied.

After a long standoff, the city announced that the park’s residents could stay the night, as long as they agreed to leave the next day. Some, including Ahmed and Busch-Lily, chose to stay. Others took the city up on its offer for housing.

The next day, activists returned for a protest near the park, standing peacefully at the intersection of Sunset Boulevard and Lemoyne Street.

More than 100 police officers descended on the peaceful crowd. One hundred and eighty-two people were arrested that night, including members of the media, according to a LAPD statement. Police cited flashlights being shone into officers’ eyes and failure to disperse as the reason for the majority of arrests.

LAPD officers were filming protestors at the skirmish line. An unlawful assembly has been declared. pic.twitter.com/zy4CSQNDUY

One of those arrested was Keliyah Williams, a Los Angeles Community College student journalist who reports for the school’s newspaper, the Los Angeles Collegian. She was arrested for failing to disperse after an unlawful assembly, a misdemeanor charge with a fine of up to $1,000 or six months in jail.

Williams tried showing her press credentials, but the officers did not acknowledge it. “They would not let me pull [the press credentials] up,” she said. “I went back to where I was, a cop pointed at me, and I was arrested next.”

According to the U.S. Press Freedom Tracker, Williams was one of over a dozen journalists arrested or detained that night.

Despite refusing to acknowledge her press credentials, officers appeared to know who she was, according to Williams.

“When I got arrested, the guy that put me in handcuffs asked ‘You go to LACC?’” she said.

Williams was later released with an order for a court appearance.

Ahmed, Busch-Lilly, and Zeller were among the last unhoused residents in the park as LAPD officers and sanitation workers swept through it that night. The next morning, Ahmed and Busch-Lilly were detained and quickly released by LAPD officers..

“We don’t have to choose between whether people get housed and whether a lake can be repaired, and whether the health of it can be restored,” Garcetti said. “We can do both.”

A week after the sweep, those who were forced to leave the park are unsure of where to go next. Many have been placed in Project Roomkey housing, but residents have told Knock.LA and the L.A. Times that they don’t know how long that will last.