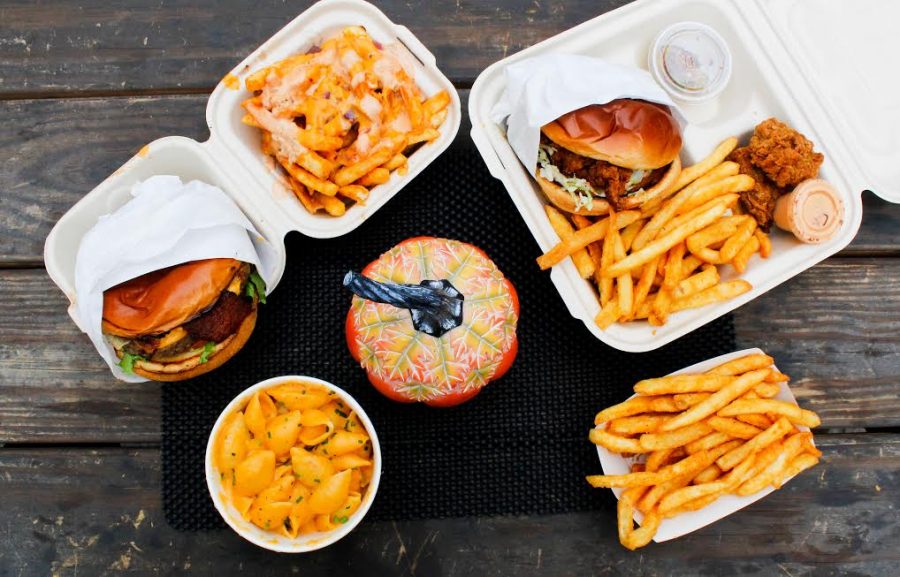 Blazin’ Burgers, a new fast food joint on Victory Boulevard in Burbank, reminded me of what In-n-Out used to be before they had indoor dining: a small stand with a long line of customers eagerly waiting for their “animal-style” food fix.

The Nashville Style Crispy Fried Chik’n Sandwich was served with Atlas Monroe chicken — named the best fried chicken at the National Fried Chicken Festival in 2018 —, between a toasted brioche bun.

The Atlas Monroe chicken was like no other vegan chicken sandwich I have ever tried. The patty was toasted and the ratio of chicken and its crunchy batter was evenly satisfying – a sign of a beautifully made plant-based chicken patty.

Biting into the Bacon ‘N Ranch Chee Burger was new for me. This was my first bacon cheeseburger ever. This burger suppressed any regrets of never trying a cheeseburger when I was eating meat.

The combination of the smoked-hickory vegan bacon slices and the Impossible Burger with the vegan American cheese was mouthwatering. Even as I write this now, I wish I could have another bite.

The mac and cheese was my least favorite. In my opinion, it is difficult to make a good vegan version of mac and cheese because dairy-free cheese options obviously lack that classic cheesy flavor.

The biggest downside from dining at vegan eateries like Blazin’ Burgers is its cost. A meal for two at Blazin’ Burgers can cost $40 while other establishments like the popular golden arches offer a four-person family meal for $20.

There are no value meals or dollar deals because these vegan eateries are mostly small businesses.

I can respect that. Fake meat can be expensive and as its demand continues to grow, so will its accessibility.

Since my visit to Blazin’, they’ve added additional menu items like a Blazin’ Breakfast burger with toasted hashbrowns, JustEgg, bacon and cheese, Chik’n Nuggets, a FunFetti shake and a coconut mango shake.

Blazin’ is uniquely owned by a mother-daughter team, which adds to my likeness of the burger shack. I’m sure I’ll find my way back to the shack soon.

Blazin’ Burgers is located at 2320 W. Victory Blvd. in Burbank. Their hours are posted on their Instagram and website.