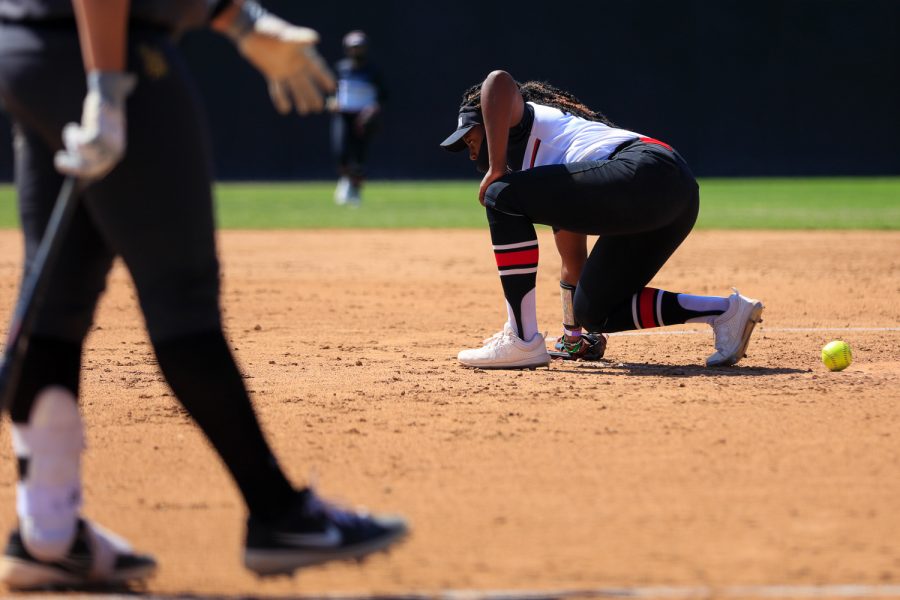 Kenedee Jamerson kneels after getting hit in the stomach during a game against Cal State Long Beach in Northridge, Calif., on Friday, April 2, 2021. The Matadors lost 9-0 in five innings.

It was the bottom of the sixth inning as CSUN center fielder Jaymi Steward stepped on the plate. Her goal: to bring in the first run for the Matadors. Steward hit the ball on the second pitch as everyone watched it fly high toward the left field. Steward hit her second home run of the season but it was the first home run on Matador Diamond of this year.

“All day we kind of have been struggling on not hitting,” said Steward. “Once the new pitcher came in I took the initiative to just get ahead in the count. Once the second pitch came in I saw it just, BANG, hit it over the fence.”

The Matadors opened the three games series against Long Beach State this past Friday with CSUN Kenedee Jamerson as the starter pitcher for game one. Long Beach’s starter, freshman pitcher Shannon Haddad, struck out nine on that day. After the fifth inning, CSUN mercied with no runs in and nine runs in by Long Beach State.

“We came out flat,” says CSUN head coach Charlotte Morgan. “We gave Long Beach a lot of bases, they came out. They competed and put the ball on play. They capitalized on our mistakes.”

Freshman pitcher Eryka Gonzales opened up the first game of Saturday’s doubleheader against Long Beach State. In the top of the second inning, Long Beach took the lead by bringing in three runs.

In the bottom of the second inning, CSUN’s right outfielder Maiya Alemania hit a single toward the left outfield, making it the first hit of the game for CSUN. With one out already, Alemania was eager to score the first run for the Matadors. The inning was cut short as Sami Garcia and Jaclyn Silva struck out, which ended the second inning.

It was a long top of the third inning for the Matadors as they allowed five more runs, bringing the score to 8-0 in favor of Long Beach State. CSUN pitcher Kayla Dominguez made her season debut toward the end of the inning.

Things started to turn around for the Matadors at the bottom of the third inning as Steward hit a double to center field and brought in Aaliyah Swan.

In the top of the fourth inning, the Matadors defense started to get aggressive as they needed one more out to finish the inning. With four stolen bases Long Beach had made, Matador catcher Silva was eager to get a runner out. Long Beach second baseman Emily Salazar, who was on first, ran to steal second base. Silva immediately threw it to second baseman Paloma Usquiano, who was able to pick off Salazar and end the inning.

“I wanted to focus on my mechanics and I knew what I had to do. So I went for it, I just wanted to get my flow back,” said Silva.

The Matadors and Long Beach continued to play the rest of the innings without letting any runs in. In the top of the seventh inning, Long Beach’s left outfielder Breezy Wise was on second base as center fielder Briones stepped into the batting box. She hit a double toward the left outfield, which brought in Wise to score and increase the lead to 9-1.

Long Beach State held on from there and took the win.

Dominguez opened up game two as the starter pitcher for CSUN and pitched for the two first innings.

Long Beach State took the lead in the top of the first inning with an RBI by third baseman Suzy Brookshire, who on a later play stole home plate.

In the top of the second inning, Long Beach State first baseman Alyssa Gonzalez hit a home run toward center field and brought in two runners. Jamerson was brought in to pitch for CSUN as they needed one more out to end the inning.

In the top of the third inning, Long Beach’s shortstop Cam Cecil hit a single toward the left outfield as she brought in an RBI, making the score 6-0.

Swan was on first base during the bottom of the sixth inning as Steward approached the plate, waiting to hit the perfect pitch. As Long Beach pitcher Sophia Fernandez threw her second pitch to Swan, she hit her first home run of the season at home, closing the lead to a 6-2 game.

“It was exciting,” said Morgan. “Jaymi did very well. She crushed that it was good to see that we were able to do that at home. It fired the team up and hopefully we get to see that more.”

Swan hit a foul fly ball toward left field as Long Beach left fielder Wise caught it — making it the second out. From third base, Garcia ran to home plate and scored 6-3. Long Beach took the win and completed the series sweep.

“I thought our offense made some adjustments during the game. Long Beach came out on top, they came out aggressive,” said Morgan. “We did fight. I thought our defense was a little bit better during the second game. Our energy was pretty well but again not enough. We just got to make adjustments for this upcoming week.”

The Matadors now sit at an overall record of 2-7 and currently ranks seventh in the Big West Conference.

Swan led the series with two runs, three hits and one RBI. Following her was Steward with one run, two hits and three RBIs.

The Matadors are back on the road this week and will go against Cal State Fullerton with a three game series starting Friday, April 9 at 6 p.m.