CSUN men’s volleyball falls to No. 1 University of Hawai’i 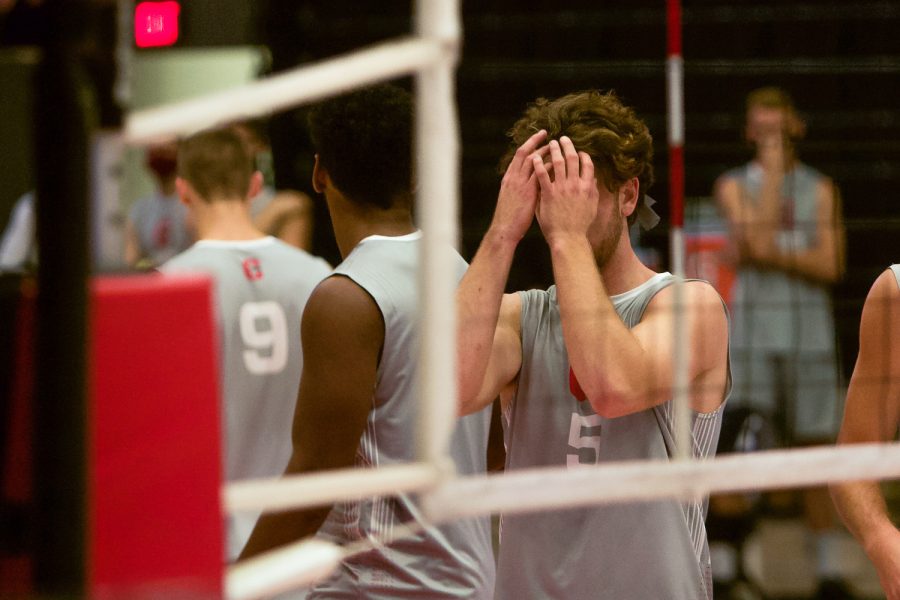 CSUN setter Kyle Merchen with his face in his hands after the Hawai'i Rainbow Warriors score a point during their volleyball match held in the Matadome in Northridge, Calif., on Saturday, April 10, 2021.

The Matadors put up the fight of the season, but could not seem to finish climbing the mountain known as the top ranked Hawai’i Rainbow Warriors last Saturday.

The number one team in the nation, Hawai’i, flexed their dominance once again en route to winning their first Big West conference title by defeating CSUN in straight sets 25-20, 25-20 and 25-21.

In the prior game, led by redshirt sophomore middle blocker Daniel Wetter’s 14 kills, CSUN pushed Hawai’i to the limit when they forced a fourth set. Even with the loss, the Matadors’ resilience was on full display. They looked to bring that same energy into Saturday’s matchup.

During the first set, the Rainbow Warriors jumped out to a quick 9-4 lead, forcing the Matadors to regroup and call a timeout. The Matadors bounced back due to stellar play from redshirt junior middle blocker, Cole Chea. This closed the gap to a 17-15 game, which in turn forced the Rainbow Warriors to take a timeout to talk things over. Hawai’i got back on track and held off a late CSUN rally to win the set 25-20.

“Even though we lost in three, I felt like we were right there in the first and third sets. The difference in winning and losing those sets boils down to experience and Hawai’i is a very experienced team,” CSUN head coach Jeff Campbell said to CSUN Athletics. “As a coaching staff, we know we’re getting better and better each week so that’s important.”

The second set went the way of the first with Hawai’i leading the set 12-8 before CSUN called a timeout to make some adjustments. In what was the play of the game, the Rainbow Warriors scored an emphatic 20th point served from senior outside hitter Colton Cowell. Cowell spiked the ball and scored a point that seemingly deflated the Matadors’ mounting confidence and simultaneously put a cap on their comeback effort. Hawai’i won the set 25-20.

CSUN’s redshirt freshman outside hitter Kyle Hobus provided the team with one final push during the third set as he made a spectacular diving save to keep the ball in play, eventually leading to a Matadors kill. But the Rainbow Warriors once again bounced back in an assertive fashion. At one point, they went on a 5-0 run opening up a 23-18 cushion. Hawai’i setter Jakob Thelle smashed down a kill to end the game and put the finishing touch on a dominant conference-clinching performance.

The Matadors now have fallen to a 1-7 overall record. Griffin Walters and Chea were tied for the team lead in kills with nine kills each. Chea and Maciej Ptaszynski lead the team in blocks on the day with three, while Ptaszynski also led the team in with two assists.

The Matadors finish the 2021 regular season when they host Long Beach State on Friday, before traveling to the Walter Pyramid on Saturday. Both matches are scheduled to start at 7 p.m.