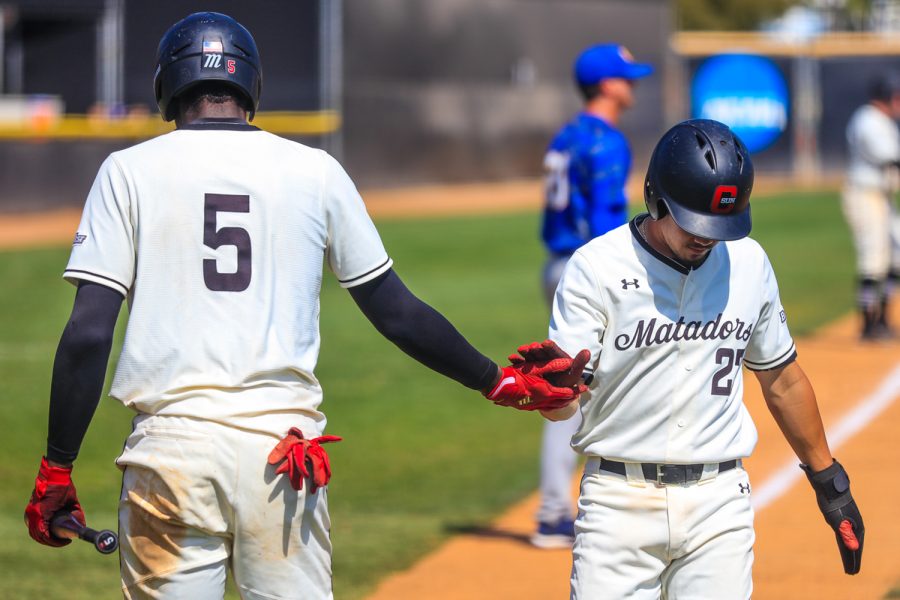 Denzel Clark, left, congratulates Mason Le, right, on his run during the second game of a double header against the UC Riverside Highlanders at Matador Field in Northridge, Calif., on Saturday, April 17, 2021. The Matadors lost both games 5-1 and 8-4.

The Matadors struggled to rally their offense in their 8-4 loss against the UC Riverside Highlanders in game two of Saturday’s doubleheader.

The lack of baserunners touching home has become a theme for the Matadors in the series where they have not necessarily lacked in hits, but rather in getting runs on the board.

Left-handed pitcher Zuko Tillman got the start for the Matadors and got into early trouble while giving up two runs in the first inning and one in the second inning.

Tillman had two difficult starts previously against UC Santa Barbara and UC Irvine where he gave up a total of 18 earned runs over both games. Although he was taken out in the fifth inning, he got a much-needed bounce-back game on the mound. Tillman’s final line was 4 1/3 innings pitched with six hits, three earned runs, one walk and two strikeouts.

“I’m a tough judge sometimes and sometimes that might put pressure on our guys. I always look for improvement and I think there were some strides [with Tillman],” said head coach Dave Serrano.

“I’ve seen that from both sides. The offensive side and the defensive side, the opportunities are there for success but we’re not taking advantage of them,” said Serrano. “We’ve had some offense I think in total close to 29 or 30 hits [in this series] but we just haven’t been touching the plate more than the other team.”

The third inning saw Frazier get into trouble when sophomore infielder Mason Le led off the inning on a scorching double and freshman infielder Ryan Ball was walked. Senior catcher Jose Ruiz took off his catching gear in the on-deck circle and stepped up to the plate, giving CSUN its first run of the game on a big single to right field.

Ruiz finished the game with three hits on five at-bats and two RBIs, providing half of the Matador’s offense.

Elias Jauregui relieved Tillman in the fifth inning and the two runs that were scored were credited to Tillman. The final play of the top of the fifth was an out on a cannon throw at home from left-field by senior outfielder Robert Bullard.

Bullard had another big play in right-field when he made a huge diving catch to give the Matadors the first out of the sixth inning, providing much-needed support to the Matadors pitching.

Robert Bullard with a great diving catch in RF for the first out in the top of the 6th. Matadors down 5-1. pic.twitter.com/baIktQJa5E

The Matadors were shut out in the seventh and eighth innings but made a two-run rally in the ninth when a double by Ruiz and an error by a Highlander outfielder cost them a run and advanced infielder Ryan Ball to third. A second run was scored on a fielder’s choice hit by senior first baseman Jason Ajamian, which led Ball into tallying the fourth and final run for the Matadors.

CSUN played the last game of the series against UC Riverside on Sunday where they avoided the sweep and were able to put 15 runs on the board, coming out on top by a score of 15-8.