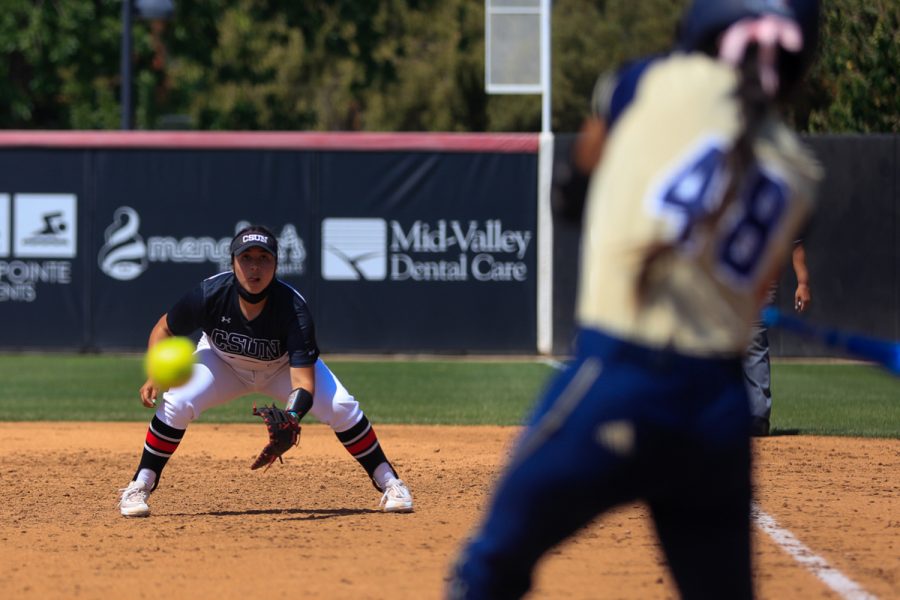 Paloma Usquiano focuses on the at-bat during the first game of a doubleheader against the UC Davis Aggies in Northridge, Calif. on Friday, April 16, 2021. The Matadors lost both games 4-2 and 3-1.

GAME ONE
CSUN softball was close to breaking their six-game losing streak during game one of their series against UC Davis, when both teams were tied 2-2 on Friday afternoon. Then, the Aggies hit a two-run home run in the top of the eighth inning to secure a 4-2 win.

Matador pitcher Kenedee Jamerson opened both games with two strikeouts for each game.In the bottom of the first inning, the Matadors took the lead as Jaymi Steward hit her second home run at Matador Diamond this season. Steward’s shot to right field brought in Journey Rojas from second base to put CSUN up 2-0.

“I usually like to start the game very aggressively,” said Steward. “I’m the fourth batter, so I see a lot of pitches before I am up to bat. It’s my chance to be aggressive and show them what I have.”

During the bottom of the fourth inning with two outs on the board, Jamerson hit a ground ball toward Aggies first baseman Sarah Starks, who missed to catch the ball. CSUN failed to capitalize on Jamerson’s hit, however, as the Aggies’ starting pitcher Kenedi Brown struck out Matador Tatum Wentworth for the third out.

UC Davis started the top of the fifth inning with their first run as Starks hit a homerun toward right field, trimming CSUN’s lead to 2-1.

In the top of the sixth inning, the Aggies managed to tie up the game with an error by CSUN. UC Davis’ catcher Anna Dethlefson hit a fly ball toward right field. CSUN right outfielder Maiya Alemania dived and missed the catch. Alemania threw it to first baseman Paloma Usquiano, who also missed the catch making it the first error by CSUN. Dethlefson ran all the way to home base and tied up the game, 2-2.

The Matadors had a chance to reclaim the lead in the bottom of the sixth after back-to-back doubles from Alexis Lemus and Steward, and a walk drawn by Jamerson loaded the bases. However, Wentworth’s eagerness to bring in a run resulted in a double play to end the inning.
GAME TWO
CSUN pitcher Eryka Gonzales was expected to open up game two of the doubleheader but she injured herself as she closed game one, which led Jamerson to pitch back-to-back games.

“My teammates helped me by keeping my energy up. I went out and did the best I could,” said Jamerson.

The Aggies took the quick lead in the top of the first inning as Dethlefson stole home plate, 0-1.

CSUN answered back in the bottom of the third when Lemus brought Rojas home from first base on a double to tie the game up at 1-1.

UC Davis broke the tie again in the top of the fifth inning, as a double from Leon brought in Sommer Kisling and Dethlefson to give the Aggies a 3-1 lead that they would not relinquish.

“Jamerson did a great job coming out today,” said coach Charlotte Morgan. “We had eleven left on bases, UC Davis capitalized and did enough. We had our opportunities; there were a few mistakes we made. We’re learning and we need to make our adjustments. We held on three runs and we should’ve had a different outcome.”
GAME THREE
Gonzales made a phenomenal comeback Saturday afternoon as she struck out seven batters.

UC Davis took the lead in the top of the third inning as Kisling hit a single toward right field and brought in Sarah Nakahara from second base.

The Aggies extended their lead in the top of the sixth inning as Starks hit a two-run home run, her second at Matador Diamond, to put UC Davis up 3-0.

The Matadors were able to produce some offense in the bottom of the sixth, as Steward brought Savannah Favre in from second on an RBI double.

It wouldn’t be nearly enough however, as the Matadors would drop their third game of the weekend to the Aggies.

“I thought Eryka came out well today, we got to come out as an offence and give her a little bit of support,” said Morgan. “I thought our energy wasn’t there today. At the end of the day they got to be able to show up to put up a fight and compete.”

The Matadors are currently in last place in the Big West Conference with a 2-13 record. Steward led the series with one home run along with three hits and three RBIs.

CSUN goes back on the road this week and will face UC Riverside in a doubleheader at 1 p.m. on Saturday