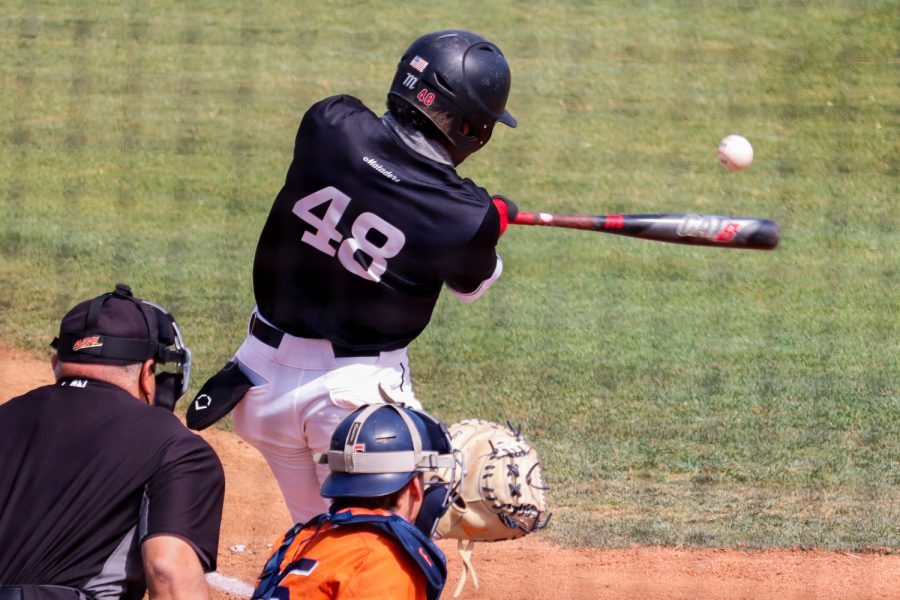 Kai Moody, 48, swings at a pitch against Cal State Fullerton at Matador Field in Northridge, Calif., on Friday, April 23. Moody went 3-4 with three runs scored in the Matadors' 11-1 win.

As the Matadors opened a four-game series with the Cal State Fullerton Titans on Friday, Matador Field was brightened by a sound that had become unfamiliar over the past year: the clapping and cheering of fans in the stands.

It was the first time fans were able to attend a CSUN baseball game in person since Feb. 17, 2020, when the Matadors hosted Washington State. Despite the limited attendance of 60 people, which was restricted to players’ relatives, family members were happy to see their sons, nephews and grandsons play live once again.

“It was just amazing. I don’t know that I can describe it,” said Kathryn Le, the mother of sophomore infielder Mason Le. “I’ve been so excited — as soon as we got the notice that we were able to come and see him play live. Both of us, me and my husband were super excited.”

The Matadors welcomed their fans back in a big way as they beat the Titans 11-1 in eight innings on a walk-off two-run-double from Ryan Ball as the game was called due to the mercy rule.

“It’s been a long time. Many of the families got to see their sons play and it just makes me proud that the school opened that up, even though it’s just a minimal amount,” Matadors’ head coach Dave Serrano said. “We were able to take care of every family member on our team, so I thought that was really cool. And I’m glad fans got to enjoy one of our better games of the year.”

On the field, the story of the day was starting pitcher Blake Sodersten, who pitched a complete game and threw seven shutout innings before allowing one run in the eighth.

“This was the first outing where I really got to command all three of my pitches and I just let them all work for me early in the game,” Sodersten said. “And I continued to throw all three of them for strikes throughout the game and it ended up working in the end for us for a good team win.”

Sodersten only allowed three hits, with two of them coming in the eighth inning, and added seven strikeouts while walking two.

“I thought he pitched really well,” Serrano said. “But I’m gonna keep pushing him to get better.”

While Sodersten was the story, the Matadors’ offense was like the much-anticipated sequel. They scored a run in every inning besides the fifth and seventh and jumped out to a five-run lead in the first two innings.

They were able to chase Titans’ starting pitcher Tanner Bibee, whom Serrano called one of the best pitchers in the Big West, from the game after three innings. Bibee came into the game with a 2.83 ERA but allowed six runs. However, only three were earned.

“I thought our approach was selfless, and a lot of unselfish at-bats,” Serrano said. “I thought we had a very good job with our approach and scored some runs with two outs, which are always backbreakers. But overall, it’s just like I shared with the team, that was good baseball and it’s fun to be part of that.”

Right fielder Kai Moody, who scored three runs, and catcher Jose Ruiz, who drove in two runs and scored two runs, led the offense with three hits in four at-bats each as the Matadors combined for 14 hits in the game.

“I’ve been having some struggles recently, so I wanted to keep it simple today,” said Moody, who is now hitting .424 this season. “I changed my approach to hitting to the right side of the field, be ready for the fastball so I could adjust off-speed. And I stayed stubborn to that approach and it was successful.”

With the win, the Matadors improved their record to 8-13 on the season.

They will play games two and three of the series at 11 a.m. on Saturday and game four at 1 p.m. on Sunday.

“I want them to feel good until they put their head on the pillow tonight,” Serrano said. “And then we come out tomorrow and have the best Saturday we’ve had all year long.”