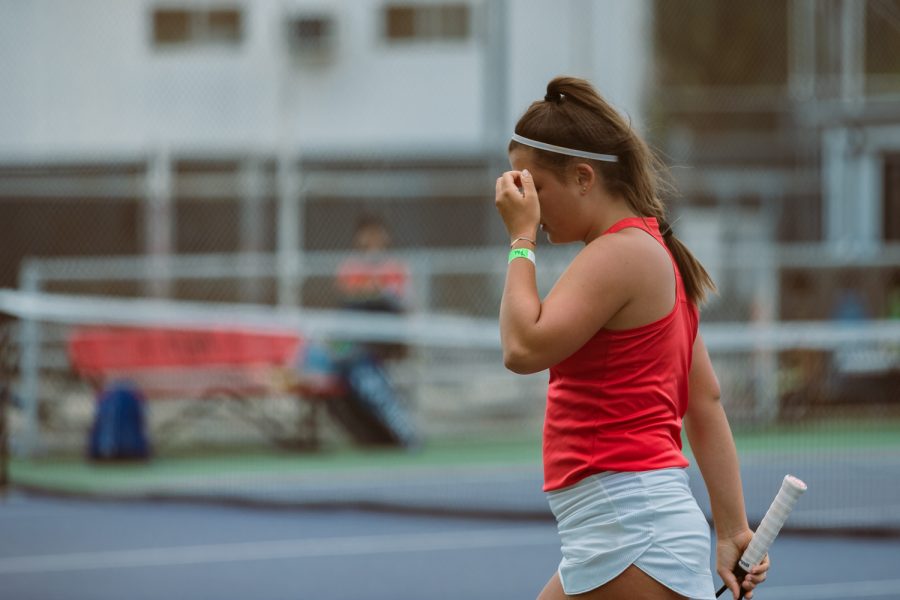 Magdalena Hedrzak puts her face in her hand after losing a point during her singles match against Eira Tobrand from Cal State Fullerton at the Matador Tennis Complex in Northridge, Calif., on Wednesday, April 21, 2021.

The women’s tennis team ended their regular season on a gloomy note when they lost to Cal State Fullerton at home on Wednesday. The overcast afternoon reflected the mindset of the Matadors, who struggled to maintain their momentum and rhythm on the court.

With a final score of 1-4, a frustrated head coach Gary Victor kept his players on the court for a lengthy post-match speech, telling them, “Please help each other do your best.” The spotty attendance at practice from players that week may have impacted their momentum, according to Victor.

“It was a day-in-day-out, not knowing who was going to be at practice,” said Victor. “It didn’t help, but you’ve got to play through it and you’ve got to be tough and they were tougher than us.”

The match started with the doubles point going to the Titans, who dominated their sets against the CSUN players. Fullerton’s advantage lingered over the Matadors as they struggled to outscore the visiting team during their singles matches.

The team’s No.1 spot, Ekaterina Repina, was unable to finish her duel after losing her first set, 4-6. She was forced to retire from the match due to an injury, giving CSUF the second point of the day. Also out with an injury was Jolene Coetzee, the No.2 spot for CSUN, whose absence was felt throughout the game.

“It puts a lot of pressure on everybody else. You like to have your leaders and you have to play with who you have. I’m proud of the ones who gave it everything they had,” Victor said.

Magdalena Hedrzak scored the only point for the home team in her sets, finishing strongly at 6-2, then 6-1. For the remainder of the duels, the Matadors grappled to catch up on points, prompting them to yell out in frustration and catch their breaths in between sets.

Jenna Dorian joined Repina and Herdzak in cheering on the remaining Matadors during their matches after losing with identical 3-6 tallies in her sets. The non-playing Titans were equally revved up to win, screaming across the courts to support their own teammates during the deciding matches.

Although Sasha Turchak and Ana Fraile Toboso continued to battle it out on the courts against their opponents, the pressure to stay in the game proved too much for No. 5 spot Jacquie Tan, whose defeat clinched the win for Fullerton.

“I think everybody was just off. I think for me and a few other girls, we weren’t as on point as we have been in the past, ” said Turchack. “I was getting more frustrated than usual when I was making mistakes and that’s just not going to help me. Next match, I’ll stay steady mentally and stay in the point longer.”

Fraile Toboso’s match against Fullerton’s Jadie Acidera went unfinished despite an entertaining back-and-forth contest. The first set ended in Fraile Toboso’s favor, 7-5, while the second set was 5-4 before the match was abandoned.

“Even though sometimes I’m up and down, I try to be calm, breathe, count a little bit and then next. Next point, next ball. Stay in the present, ” Fraile Toboso said. “I’m really focused on my game, but sometimes I look back and forth to see how my teammates are doing. I always try to cheer for them.”

What would normally be a brief congratulatory postgame pep talk turned into a disciplined call-to-action on the courts from Victor. He urged his players to commit themselves to every practice session as they would soon face Fullerton again in the Big West Tournament.

A victory would have secured CSUN as the third seed in the conference, according to Victor, but CSUN ranks sixth due to the loss.

“We’re tied with Hawaii at being the sixth seed. That’s how close everything is,” said Victor.

The Matadors are scheduled for a rematch with the Titans in the first round of the Big West Tournament, as the third and sixth seed have to duke it out to remain in the competition.