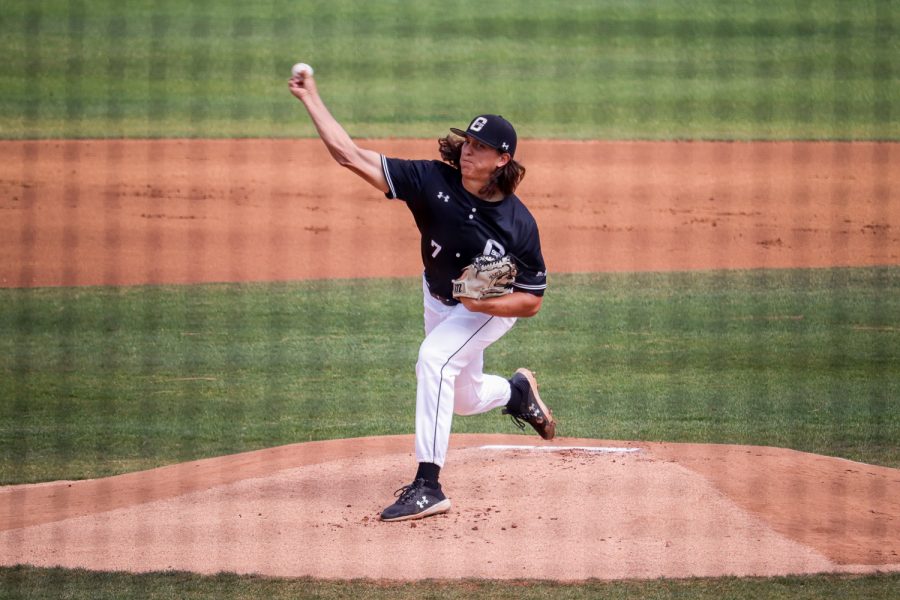 Matadors' starting pitcher Blake Sodersten throws a pitch against Cal State Fullerton at Matador Field in Northridge, Calif., on Friday, April 23. He was awarded Big West Pitcher of the Week for his performance on Friday.

“What’s up, Big West Pitcher of the Week?”

Those were the words Blake Sodersten first heard from his teammate Jeremy Hassel in a FaceTime call that let him know he was named the Big West Pitcher of the Week.

“I got really excited and I was like, ‘no way,’” Sodersten said. “And it just went from there. All the posts kept happening and everyone was saying it.”

Sodersten, a junior starting pitcher on the Matadors, was awarded the honor after posting his strongest performance of the season against Cal State Fullerton on Friday.

“It means a lot,” Sodersten said. “When I see something like that happen, it really brings me back to my roots and how I prepared for this moment, not just being the Friday pitcher for our team, but being prepared to be successful now and in the future. So it’s really good to see that people are now noticing my success.”

Sodersten pitched a complete game, throwing eight innings as the Matadors had a walk-off run rule in the bottom of the eighth. He allowed only one run on three hits while adding seven strikeouts in the 11-1 win.

Blake Sodersten tossed his first complete game of his career in the win over Cal State Fullerton. He worked eight innings, allowing one run on three hits to go with seven strikeouts. pic.twitter.com/PzTau7Xm53

After hitting a batter in the first inning, Sodersten retired 16 of the next 17 hitters and did not allow a runner to reach second base until the seventh inning.

Sodersten carried a shutout into the eighth inning but it was broken up after he allowed a pair of two-out hits. He said he was able to visualize having success on the mound, which brought a positive impact to his performance in the game.

“The success from my last outing, I would have to say comes from the amount of preparation, not only from the skill side of pitching but from the mental side of pitching as well,” Sodersten said. “So what I did is I took the game one little detail at a time. I had success with all my pitches mainly because I didn’t get very result oriented. I just took the game one pitch at a time.”

He was one of five pitchers nominated for the award, along with CSU Bakersfield’s Jack Lee, Hawai’i’s Cade Halemanu, Long Beach State’s Jack Noble, and UC Irvine’s Trenton Denholm.