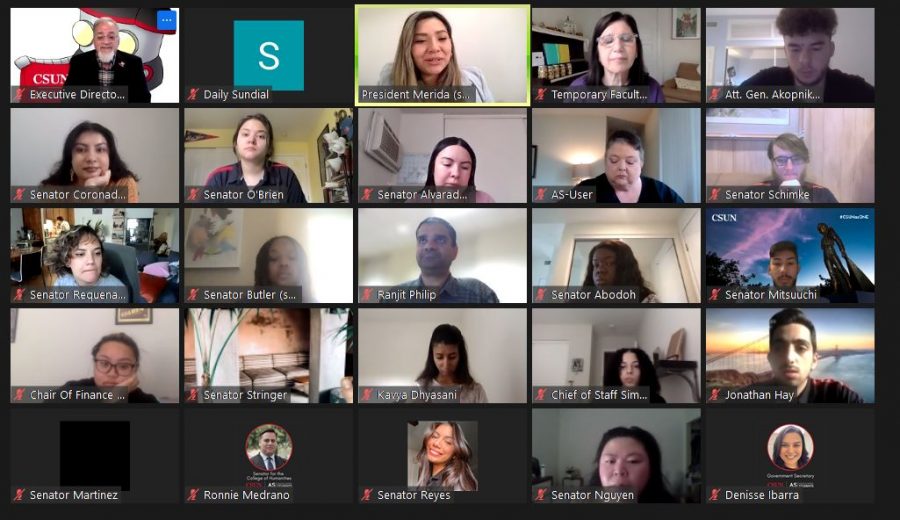 The Associated Students addressed the environmental impact of single-use masks, oil spills, and acknowledged that CSUN stands on Native land through a series of motions during their weekly meeting on Monday.

Committee Chair Adriana Coronado led the discussion with the senate about the resolutions that were developed. The first resolution seeks to determine how AS will encourage a sustainable program for the disposal of single-use masks on campus.

According to the resolution, the pollution of single-use masks has become an issue since the onslaught of the COVID-19 pandemic. As CSUN plans to increase on-campus instruction and activities, AS believes that littering and unsustainable disposal of masks “may increase exponentially.”

A recent study found that 129 billion face masks are used globally every month. Disposable masks are considered micro and nano plastics, which continue to impact the environment negatively. Currently, there is no official guidance on recycling masks.

According to the resolution, the External Affairs committee recommends requesting the AS Marketing and Sustainability team to reach out to the university to coordinate a co-produced campaign and provide dropoff sites for single-use mask disposal.

The senate approved the recommendation, and the External Affairs Committee will provide further details about the project at a later date.

The second resolution presented before the senate called for AS members to formally acknowledge Native land at the beginning of each AS meeting. According to the resolution, AS recognizes that CSUN occupies the Fernandeño Tataviam Band of Mission Indians’ land and acknowledges other neighboring Indigenous groups, such as the Gabrielino-Tongva Indian Tribe and the Santa Ynez Band of Chumash Indians.

The senate passed the resolution, which will enact a policy that the AS president will cite a land acknowledgment at the beginning of each meeting before the Pledge of Allegiance. The acknowledgment that is to be read by the AS president states: “Associated Students recognizes and acknowledges the first people of this ancestral and unceded territory of Fernandeño Tataviam Band of Mission Indians that is now occupied by our campus of California State University, Northridge; honors their elders, past and present, and the descendants who are citizens of the Fernandeño Tataviam Band of Mission Indians. We recognize that the Tribe is still here, and we are committed to lifting up their stories, culture, and community.”

This acknowledgment aims to establish a longstanding AS tradition of advocating for the inclusion of all and addressing current and historical injustices.

The final resolution approved by the senate requests that Chevron Richmond Refinery be held accountable for their misconduct and actions surrounding an incident where an estimated 600 gallons of oil spilled into the San Francisco Bay on Feb. 10. Firefighters and wharf operators responded to the emergency call and were able to shut down the pipeline within two hours.

The details behind the incident are still under investigation, but it is believed that an overhead pipeline leaked, which caused the spill. The California Department of Fish and Wildlife said cleanup on the spill was completed on Feb. 23. State Assemblymember Buffy Wicks (D-Oakland) plans to introduce a bill into legislation that increases fines and penalties for negligent harm caused by refineries and industrial facilities.

AS wants Chevron Richmond Refinery to be fined for the cleanup costs and for any environmental damages caused by the spill. In addition, the senate demands that Chevron pay an additional fine of 10% for the “social cost of community inconvenience.” AS will also hold a presentation in its senate meetings to raise awareness of the environmental impact of improper handling of oil by large corporations.

The resolution will be distributed to members of the campus community, California’s Office of Emergency Services, local and county officials, and the Bay Area newspaper, the San Francisco Chronicle.

The next AS meeting will be held at 9 a.m. on Monday.