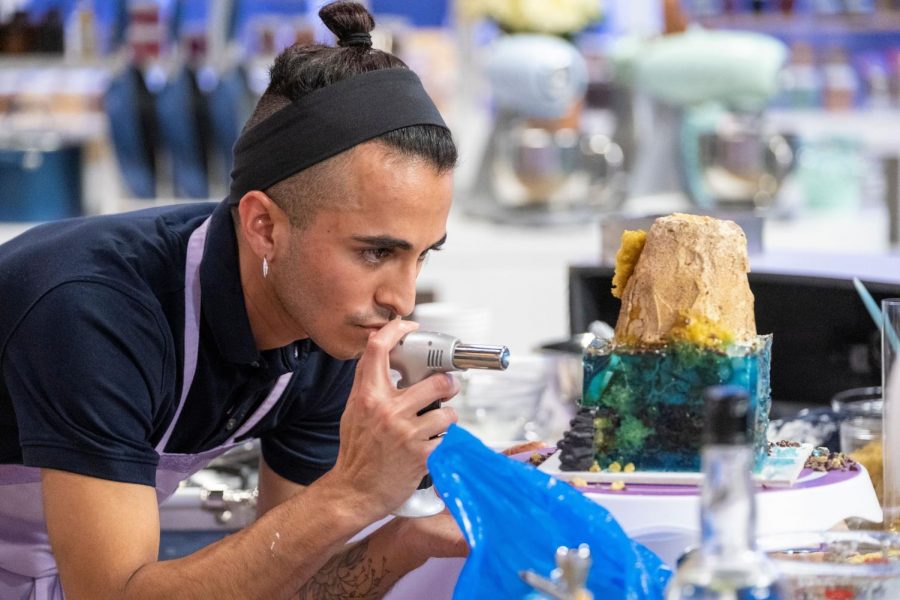 Gregory while building his prize-winning volcano.

Gregory Rodriguez, the first winner of HBO Max Originals “Baketopia,” never imagined he would end up on a TV show. After four failed attempts at landing a position on shows like “Chopped” and other competitions, he began to lose hope.
He remembers being rejected by show producers for reasons that were out of his control. At times, he was told he was either under experienced or over experienced, among other things.
However, after his fifth try at auditioning, he found himself on the set of the show, and ultimately won the competition on “Baketopia.”

On March 25, HBO Max Originals debuted its first episode of the show. This competitive baking show has each contestant create a uniquely themed pastry for a chance to win a $10,000 cash prize.

The desserts are then judged by Rosanna Pansino, a baking social media influencer, and her two co-star judges, Timbo Sullivan and Donal Skehan.
Rodriguez, a chef with five years of professional experience, said the show was shooting all day from 6 a.m. to midnight.
“It was hectic,” he recalled of the competition and he had his doubts about succeeding on the show.
“I didn’t think I was going to win honestly. I really thought it wasn’t going to happen,” he said.
However, his prediction was wrong as he went on to win the grand prize.
During the competition, Rodriguez paid tribute to his grandparents’ home country of El Salvador; more specifically, Santa Ana, El Salvador by creating a cake that replicated the Santa Ana volcano.
The cake was based on stories that Rodriguez heard as a child from his grandparents and great grandparents. This would act as the inspiration for the winning cake.
“Santa Ana is a city that is not a place where they were raised in, but a city that was close by,” he said. “So, I still wanted to pay homage to my family. Based on their stories and their childhoods.”
Rodriguez created a passion fruit curd with a lychee compote and a Tahitian vanilla cake in the shape of the volcano.
As the judges evaluated Rodriguez’s cake, Pansino asked, “Does it do volcano things?”
Rodriguez would then awe the judges by adding dry ice, giving his volcano the illusion of an impending eruption.
“After watching my family see the premiere, I just saw my grandmother be so intrigued. She was like ‘That’s it. That’s how it looked,’” he said.
But what made this much more special to him was his ability to donate pieces of his earnings to two organizations he felt close to.
Rodriguez donated to the California Farmworker Foundation and to the youth at the Los Angeles LGBT Center. “Those two foundations that heavily positively weighted on my heart,” he said.
During the ending of the first episode, Rodriguez remembers that they cut out the second foundation that he would be donating to and only aired him stating the Los Angeles LGBT Center.
“I donated to two different foundations,” he said. “I was shocked they didn’t share the second one. They only aired one of them. But, the second foundation I chose was the California Farmworkers Foundation for agriculture.”
Rodriguez donated an estimated $600 to $700 between the two foundations.

“A little bit goes a long way, so of course I wanted to contribute to them,” he said.
He wanted to support farmers who were not getting paid very well during the pandemic and who had to work laborious hours under tough environments, such as the August Complex Fire in 2020.
“Without farmers, us chefs would not be able to have the best ingredients,” Rodriguez said. “We wouldn’t have the best of the best.”
As for his donation to the Los Angeles LGBT Center, Rodriguez wanted to give support to those in the community who do not have supportive families like himself and to those who are struggling with drug abuse, neglect and other negative outcomes.
With the rest of his earnings, he began to pay off bills, put some into savings and began purchasing more baking equipment to continue his venture as a pastry chef.
“I have so much equipment coming in. It is insane that I spend so much money on kitchen tools, believe it or not,” he said with a chuckle. “My mom’s like ‘Why haven’t you bought clothes?’ because the majority of my money goes downstairs into the kitchen, which I know it’s a bad habit.”
His dream of becoming a pastry chef started at five years old. He remembers making a boxed cake and knowing he wanted to pursue a career as a chef.
Now, Rodriguez will be the new pastry lead at the Agua Caliente Casino Resort at Rancho Mirage. One day he would like to have a storefront, but as an extrovert, he hopes to eventually travel the world with his career and take his art with him. His dream job location would be the Ritz Carlton in Perth, Australia.
As of now, he will be taking private orders if people would like to try one of his original cakes. He is booked from April to May, but will make himself available to take more orders starting in June.
The first episode of “Baketopia” is available on YouTube and available to stream on HBO Max.