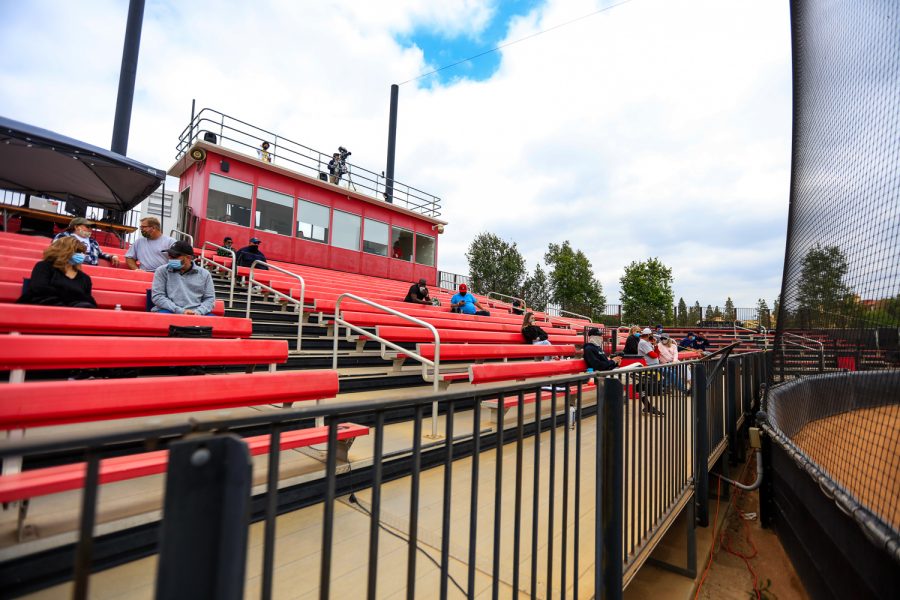 CSUN walked away with a split in its doubleheader against Cal State Fullerton on Saturday. It took extra innings to finish a very tight game one, but the Titans came out on top 6-4 in 10 innings. Game two was a complete flip, with the Matadors taking control in the middle innings en route to a 10-2 victory.

After back-to-back hits, Fullerton’s Jackson Lyon hit a double off of sophomore pitcher Gavin Lizik. Following a throwing error from second basemen Carlos Arellano, the Titans had their first run of the game.

Lizik showed resilience in upcoming innings when he retired the next 13 out of 14 batters, which kept the Matadors in range to come back and potentially tie or take the lead.

In the fourth inning, senior first baseman Jayson Newman put CSUN on the board with a sharp single to center field, which scored fellow senior Jose Ruiz to tie the game at one run apiece. Though the lead did not last long, as Fullerton’s Isaiah Garcia put the Titans back on top with a two-out RBI single.

Both teams went back and forth trading runs for the next couple innings until the game reached a 3-3 tie in the 10th inning. Cal State Fullerton took control from then on with a game-breaking rally with two outs that put them up 6-4.

CSUN mounted a small rally during the bottom of the 10th inning when Jayson Newman once again singled up the middle, this time to score right fielder Kai Moody, but it was not enough as Fullerton’s Cameron Repetti closed the door after striking out designated hitter Ryan Ball.

In what was one of the best starts of the season for a Matador pitcher, redshirt sophomore Jeremy Hassel pitched five solid innings of one-run baseball.

After giving up a home run to the Titans’ Isaiah Garcia in the second inning, Hassel did not allow another run for the rest of his outing.

“[Hassel] kept them off balance. Jeremy has worked extremely hard in the bullpen and worked extremely hard from an injury a couple of years ago to get back,” said CSUN manager Dave Serrano. “He’s one of the team favorites and deserving of this. I’ve seen the consistency coming from him. We’re searching for that fourth starter, and he gave us a big shot in the arm.”

CSUN’s bats also came alive during the second game of the day. Senior first baseman Jayson Newman again led the charge for the Matadors. During the fourth inning, Newman blasted a pitch deep over the center-field fence to tie the game.

During the sixth inning, the Matadors took the lead and never looked back. The first five Matadors reached base safely to start the inning, highlighted by a two-run double from shortstop Brandon Bohning and an RBI double from right fielder Robert Bullard. CSUN added to the lead with three ground balls off the bats of Kai Moody, Jose Ruiz and Ryan Ball — each resulting in an RBI — to cap a six-run inning.

“I thought our team bounced back well. I think the difference was we got some run support, but for us it was confidence,” said CSUN manager Dave Serrano. “We came out, it was one to nothing, in favor of them early on, and then we came back. Because I do think there’s a little bit of doubt on Saturdays because it’s been such a struggle, but we maintained our toughness and came out on top.”

Junior pitchers Elias Jauregui and Kyle Hoskins came out of the bullpen to combine to pitch the last four innings to secure the CSUN victory.

The Matadors now head up north to take on the 14-9 Cal State Bakersfield Roadrunners in a four-game series on Friday.