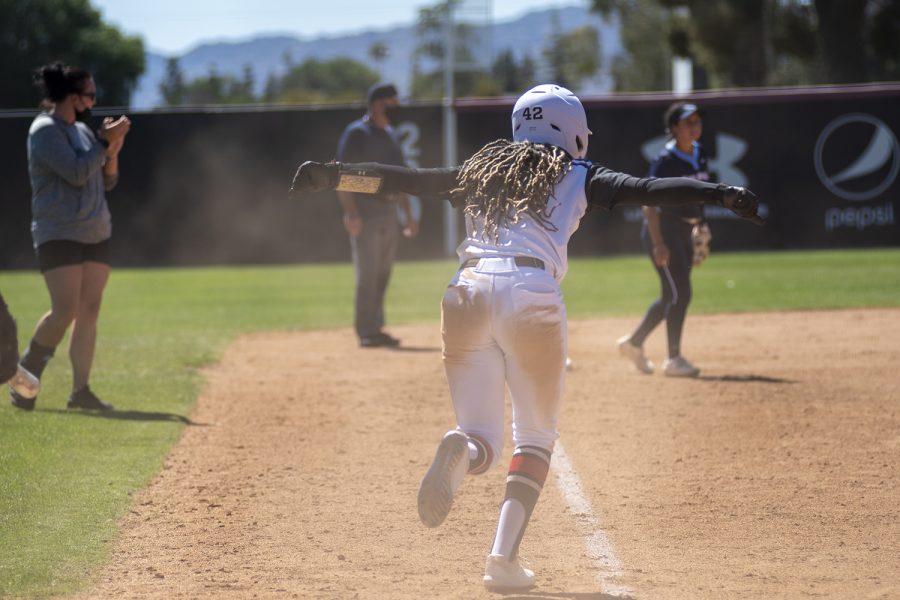 Jaymi Steward runs toward her teammates to celebrate their win against the University of San Diego at the Matador Diamond in Northridge, Calif. on Wednesday, April 28, 2021.

It was the bottom of the eighth inning as the Matadors needed to score two runs to win their first home game of the season. Kenedee Jamerson stepped up to the plate with Savannah Favre on third base and Jaymi Steward on second. As Jamerson hit a single ground ball toward right field, the crowd went wild. Jamerson then knew she got the walk-off hit.

“I was just trying to feel myself, use my legs, and stay true to the ball,” said Jamerson. “I knew it wasn’t going to take a lot, I just needed to put the ball on play.”

The Matadors welcomed their fans back to the Matador Diamond as they defeated the University of San Diego Toreros in a doubleheader on Wednesday.

“I was so happy for them to watch us play,” said Jamerson. “I’m pretty sure everybody heard my dad talking the whole game. It was me and him going back and forth. It just brings me so much joy. I love playing for them because they helped me get to this spot. Having fans watch us play helps us bring that energy that we need.”

Jamerson opened game one for the day and pitched for six innings with three strikeouts.

San Diego took the lead in the top of the second inning as AJ Kaiser hit a homerun toward left field, 0-1.

In the top of the fifth inning, Torero Savannah Alarcon hit a ground ball toward Jamerson. As Jamerson threw it to first to get the out, Halle Kyler scored from third to extend the Torero lead to two runs.

CSUN tied up the game in the bottom of the sixth inning as Sami Garcia hit an RBI single toward center field and brought in Favre to score the first run, 1-2. Steward scored the tying run on a sac fly from Paloma Usquiano.

The game went to extra innings. The Toreros broke the tie as Amanda Limon bunted to bring in Hayley Hensley, which gave USD the lead again, 2-3.

“I feel like I had to have a different approach because they’ve seen play for the last innings of game one,” said Gonzales. “I came to game two trying to hit my spots, stay in my zone and I trusted my pitches. My defense did the work for me and my offense. The work was a little light on me today but I got my job done.”

San Diego took an early 0-2 lead in the top of the first inning as bases were loaded. Sofia Delgado hit a ground ball to Paloma, who couldn’t make the throw home in time as the Toreros scored the first run of the game. The Toreros added another run in the inning off Kyler’s ground ball toward left field, which led Rion Simms to score.

In the bottom of the second inning, Garcia tied up the game for CSUN with a single toward centerfield, which brought in Jamerson and Aaliyah Swan to home plate.

Steward hit a triple toward right field in the bottom of the third inning and later scored off an RBI hit from Jamerson to give the Matadors a 3-2 lead.

Alacron tied up the game in the top of the fourth inning as she hit a single toward left field that brought in Kyler to score, 3-3.

The Matadors made a comeback in the bottom of the fourth inning as Garcia hit an RBI double toward left field and put the Matadors up 5-3.

“I was excited for them, this is the first time we’ve won two games,” said Coach Charlotte Morgan.“I thought we capitalized. Eryka did a great job in the circle, they got two early runs, but she stayed in there and kept making better adjustments and better pitches. Our defense made some pretty good plays and offensively we just plugged away and had good ABs, being a little bit more aggressive. It’s exciting to see things come together, exciting to see all their hard work.”

The Matadors are back on the road next week to go against UC San Diego for a three-game series starting at 5 p.m on Friday.