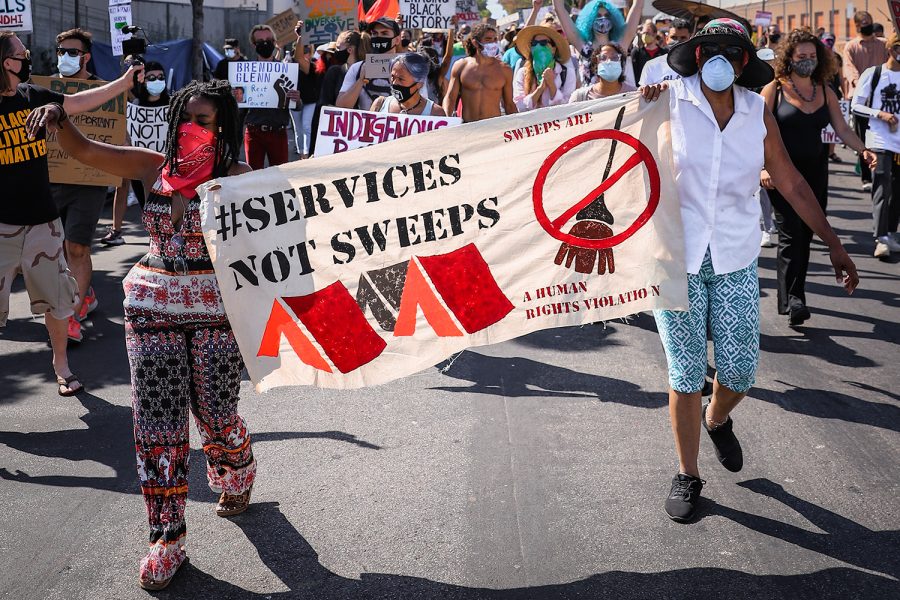 Protesters hold up a sign advocating "Services Not Sweeps," during a protest against inhumane treatment of homeless people at Venice, Calif., on July 5, 2020.

Los Angeles Councilmember John Lee, who represents District 12, which includes Northridge, has the lowest number of motions moved in the past year. Activists argue Lee is prioritizing public safety, local businesses and city services, and is falling behind on significant issues such as the homelessness crisis.

Since being sworn into office Aug. 30, 2019, Lee has moved 72 motions, 48 in the last year. The average number of motions moved per council member last year was 108, according to data from the city clerk.

“His record speaks for itself,” said Zachary Volet of the local nonprofit organization, West Valley People’s Alliance. “Council members wield an enormous amount of power, even though they like to pretend sometimes that they don’t.”

“It’s really not about the quantity that you put in, it’s more about the quality,” Lee said about his number of motions being lower than his fellow council members in a phone interview. “It’s not that I’m saying my colleagues do things just for show, but I know that every time we put in something, it’s well thought out and something that has real meaning.”

Lee supports the Los Angeles Police Department and the amount of funding they receive, contrary to calls from activists throughout the past year to defund law enforcement in response to cases of police brutality against the Black community nationwide. “Defend Not Defund,” is a slogan Lee has used to advocate for LAPD.

“I thought we should have recognized that they have been making reform. They’ve changed so much … The makeup of the LAPD exactly mirrors the population of our city. It’s so important people speak different languages, have different experiences, someone that looks like them in their community,” Lee said. “We all agree what happened to George Floyd was horrific. It made us all uncomfortable and sick to watch, but also I thought that taking all of societal ills and blaming LAPD at the time was really not the right message.”

The total proposed city budget for 2021-22 is $36.2 billion. Police funding is projected to use $1.7 billion — almost 5% of the total budget — a figure greater than any of the other fund recipients, according to the proposed 2021-22 budget. In comparison, the budget has promised to allocate $791 million to the homelessness crisis — less than half of the city’s police budget. Lee has made eight motions to increase funds for LAPD during his time in office.

“They already have such an unreasonably sized portion of our budget, the fact that John Lee has made eight additional motions to move more funding to them when they already suck up such a large portion — that’s not helpful,” Volet said.

Lee’s motions proposed that District 12 funds be transferred to an account for LAPD to pay for police officers’ overtime pay.

“We have the lowest amount of crime in the city of Los Angeles in my district, and so [the LAPD police chief] has to prioritize resources to the areas that need it most,” Lee said. “But I also felt that our community deserved to have [patrol] cars on the street. So, that was just to fund additional overtime so that we could have more patrols on the street in our area.”

Northridge West Neighborhood Council has worked with Lee and his administration to improve issues, such as trash pickup and street safety.

“They aren’t sexy hot political issues, but they are the things everyone agrees are necessary, so in some way, they’re the best kind of issues to work on because they’re not controversial and we can come to a common ground and move forward with them,” said Abby Bailes, president of NWNC.

Though Lee has responded to ideas such as picking up trash and streetlight additions, activists feel there are more severe issues that need to be addressed.

“I don’t think anyone would argue homelessness is our biggest issue facing the city and intertwined with that is housing policy,” Volet said.

In March, District 13 councilmember Mitch O’Farrell called for the closure and clean up of the encampment in Echo Park. He attempted to provide temporary housing and hotel rooms for the former residents through a program called Project Roomkey.

“We’re not going to build our way out of this problem. While I think it’s a part of the solution, we have to get to the root cause of the issue,” Lee said. “I don’t want these to just be recycling places where they come stay for 90 days and then we see them again. I want them to get housed and stay housed … I know that we have city solutions but I challenge my staff that we should have district solutions.”

On May 7, Lee moved a motion to revoke Proposition HHH funds for the affordable housing project, “Topanga Apartments.” His motion stated that the funds should be “earmarked for an innovative project proposal within Council District 12.”