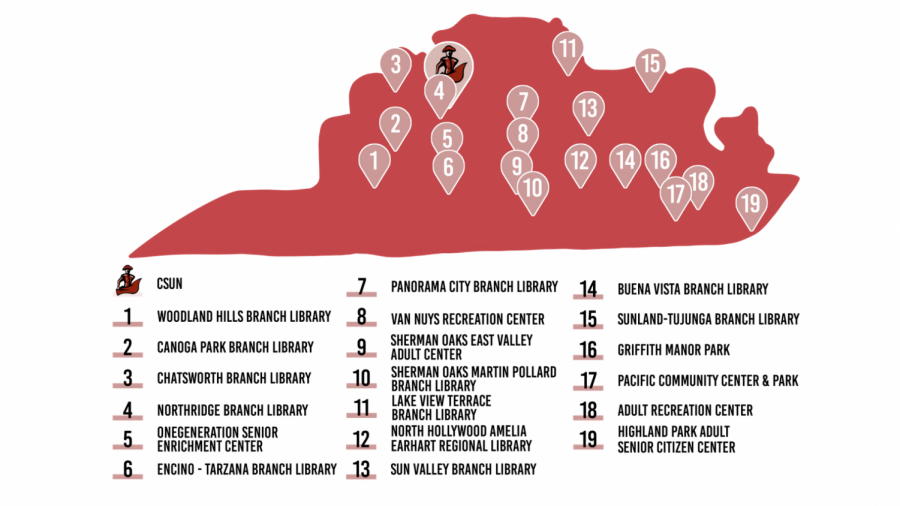 A map of the 19 cooling centers in Los Angeles County. See interactive map in story.

Temperatures reached 109 degrees in Northridge on Tuesday as part of a heatwave that extended through much of the Southwestern U.S.

The heatwave has prompted an advisory from the National Weather Service. Both city and county officials are encouraging Angelenos to watch out for signs of heat cramps, heat exhaustion and heatstroke. They also advised citizens to stay hydrated, wear light-colored and loose clothing, and stay in shaded areas to find a local “cooling center.”

Cooling centers have been established by both the city and county as a response to the heatwave and will remain open until Sunday, June 20. In addition to these official locations, Angelenos can take refuge in any public library across the county, including the Northridge Public Library, which is now open as of June 15.

Temperatures in Los Angeles are expected to fall after June 20, but the heat will still remain in the upper 80s and low 90s.

The Daily Sundial has compiled a map of these cooling centers, which include public libraries in the area:

The CSUN University Library is still not open to the public and is only available to students who make a reservation online.

The heatwave also coincides with the reopening of California, which did away with the majority of COVID-19 restrictions and policies that were put into place by Gov. Gavin Newsom at the start of the pandemic.

At a press conference on Tuesday, Newsom attributed the reopening to a decrease in COVID-19 cases and deaths, and an increase in vaccinations.

The Mega POD vaccine centers of L.A. county, including the one at CSUN, are now closing as well. This comes after experiencing a lack of demand for vaccines with dwindling numbers of people coming in for vaccination during the site’s final days.

Martinez also said that although the demand had declined at their drive-through sites, L.A. County is still committed to getting people vaccinated but is now taking a different approach. The approach includes more community based vaccination efforts such as mobile vaccination centers, longer hours of operation at local clinics, and community outreach.

During its run as an L.A. County Mega POD, the CSUN vaccination center distributed over 245,000 doses of the COVID-19 vaccine.