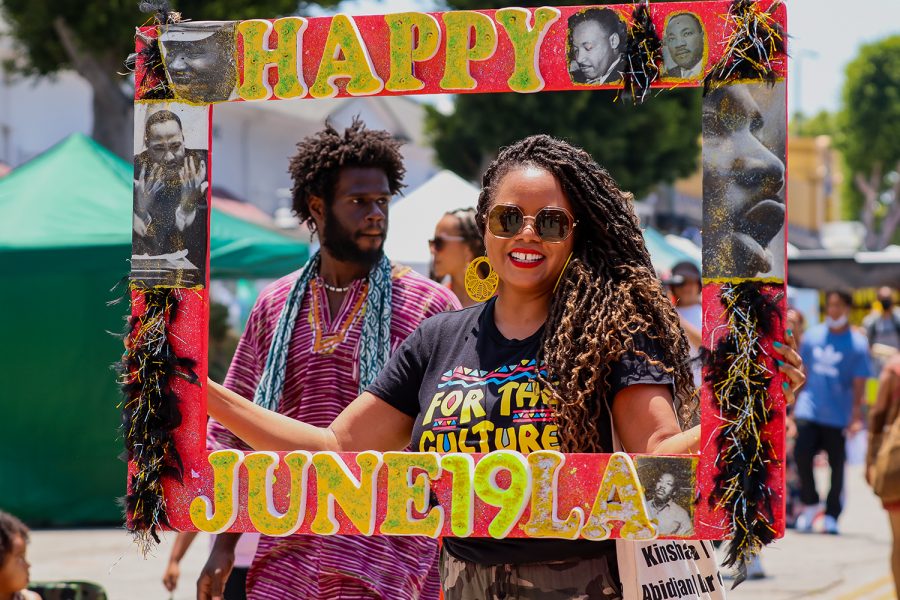 Kai Lawson poses for a photo for the Juneteenth celebration at the Leimert Park Rising event in Los Angeles, Calif. on Saturday, June 19, 2021.

On June 17, President Joe Biden signed into law that Juneteenth will be a federal holiday. Juneteenth celebrates the emancipation of enslaved African Americans. Many Juneteenth celebrations were held throughout Los Angeles. Here are three that the Daily Sundial covered.

The Maroon Arts & Culture organization kicked off the “Juneteenth Jubilee,” their first ever Juneteenth celebration, on Saturday, hosting an array of local Black-owned businesses and their products. Event participants honored the new federal holiday with a blessing and morning yoga followed by a guided shopping event hosted by actor Charles Reece.

CSUN alumni and co-event organizer Lindsay A. Jenkins helped curate a cultural experience by displaying art inside the Maroon Arts and Culture Facility by local Black youth, such as the artist Osyris.

A recurring theme of the event was the realization of one’s entrepreneurial power.

Nitz by Nat business owner and CSUN alumni Natalie Fletcher noted that it was difficult to realize she had the skills and knowledge to start her own business.

“In highschool, I used to braid hair for people in order to make money on my own. Then after college, I learned how to crochet,” said Fletcher. “It all goes back to me using my hands to create and now I am the happiest getting paid for something I naturally do.”

The same was true for HI iQ owner Quida Thornton. For most of her early career, she followed a path in corporate America, where she felt constantly burnt out and unhappy.

“My current job as a small business owner isn’t for everyone. Some people need that security. But, that’s never been the case for me,” said Thornton. “I love this and I never thought I would say that.

After spending more than one hour handcuffed and laying down on the concrete, he sat in tears alone in his hotel room, isolating himself for the entirety of the following day. After cutting his trip short, Benson boarded a plane home. When he arrived, the three large canvases he ordered were waiting for him at this door. He began to paint — he has not stopped.

His current installation, “Neon Black 2,” celebrates the vibrancy of Black culture. According to one of his Instagram posts, Benson said, “My goal was to show that brightness and color are integral parts of what it means to be black; that dark doesn’t have to mean dangerous.”

Benson said the goal for his art installation is to “display the differences of the Black experience within and without. In doing so, I can highlight how black people are perceived vs their reality.”

Benson is currently on a west coast tour that began on June 18 in Los Angeles to celebrate Juneteenth. The next stop will be San Francisco, Calif., with the show ending on July 17 in Las Vegas, the same city his experience with police brutality occurred three years prior.

The street fair was organized by members of the Leimert Park community and consisted of art displays and live music from many artists including Grammy-award winning artist Terrace Martin. The event also gave a space for Black-owned businesses to share and celebrate their unique products.

“Juneteenth is a day where we commemorate not only the freedom of all enslaved African people but also celebrate the strength and resilience of Black people in this country,” Leimert Park Rising wrote on their website.

City Councilman Mark Ridley-Thomas was present at the event to reopen Leimert Park to the public after the first ever national observance of Juneteenth as a holiday, according to CBS Los Angeles.

Ridley-Thomas emphasized the importance of this day, saying it’s a celebration of the Leimert Park community and a reminder of the increasing need for equity.