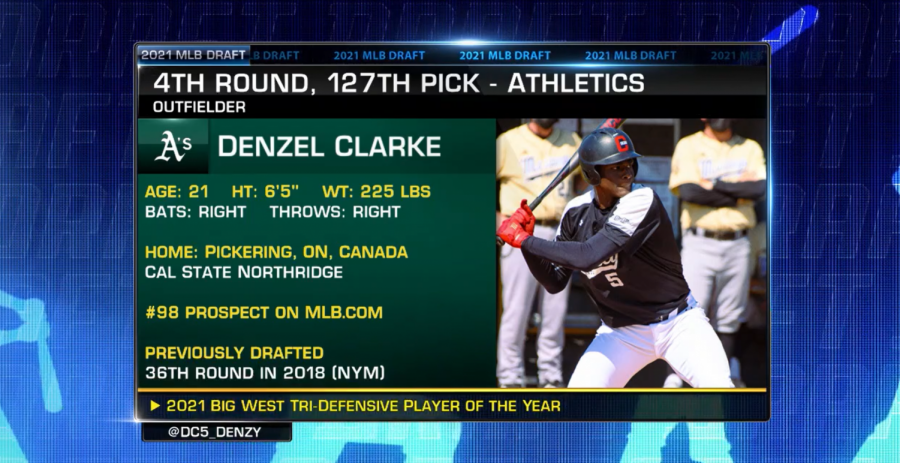 CSUN outfielder Denzel Clarke was drafted by the Oakland Athletics 127th overall in the fourth round of the 2021 MLB Draft on Monday, July 12, 2021.

Matador outfielder Denzel Clarke was drafted by the Oakland Athletics in the fourth round with the 127th overall pick of the 2021 MLB Draft on Monday.

He is the first baseball player to be drafted from CSUN since Trevor Casanova (13th round), Albee Weiss (23rd round) and Justin Toerner (28th round) were drafted in 2018. He is also the 13th player in CSUN history to be drafted in the top five rounds and the first since pitcher Craig Baker was taken in the fourth round of the 2006 draft by the Colorado Rockies.

Clarke, who is from the city of Pickering in Ontario, Canada, was previously drafted by the New York Mets in the 36th round of the 2018 Draft but opted to attend CSUN instead.

The slot value of the 127th pick is worth $447,400, although teams can sign players for more or less than that value.

Teams have limited budgets to sign their draft selections, so junior and senior college athletes tend to sign below the slot value as they hold less leverage than players drafted out of high school or younger college athletes. A player who has not completed his senior year can decide to return to college instead of signing and enter the next season’s draft.

The budgets are determined by the Collective Bargaining Agreement and calculated based on the draft spots each team has. The A’s have $6,188,900 to sign their 20 draft selections.

Congrats to @CSUNBaseball’s Denzel Clarke on being selected in the 4th round of the #MLBDraft2021 by the @Athletics. pic.twitter.com/Hem27yRHVM

Clake entered the draft projected to go anywhere from the third to fifth round.

He increased his draft stock at the first ever MLB Draft Combine in late June, according to Jim Callis of MLB.com. Clarke topped all hitters in average batted-ball distance at 344 feet and hard-hit percentage at 82.4%, and he finished second with an average exit velocity of 98.241 mph.

? @DC5_Denzy, meet @PujolsFive!@RaulIbanezMLB and the @CSUNBaseball outfielder take you behind the scenes of a special moment at the first-ever @MLBDraft Combine. pic.twitter.com/ifqCXIQxmy

The Athletic had Clarke as the 53rd-ranked prospect in the draft, with a report that said: “A cousin of the Naylor brothers, Clarke is an athletic 6-5 outfielder with plus speed and above-average power, performing well for Northridge this year, with some concerns about his approach when he gets to face better pitching.”

Fangraphs, which ranked Clarke as the 75th best prospect, said: “Clarke is a high-end athlete whose mom was an olympian. Teams think, because he’s a cold weather prospect, that he’ll have late skill growth, and they love how much power potential he has.”