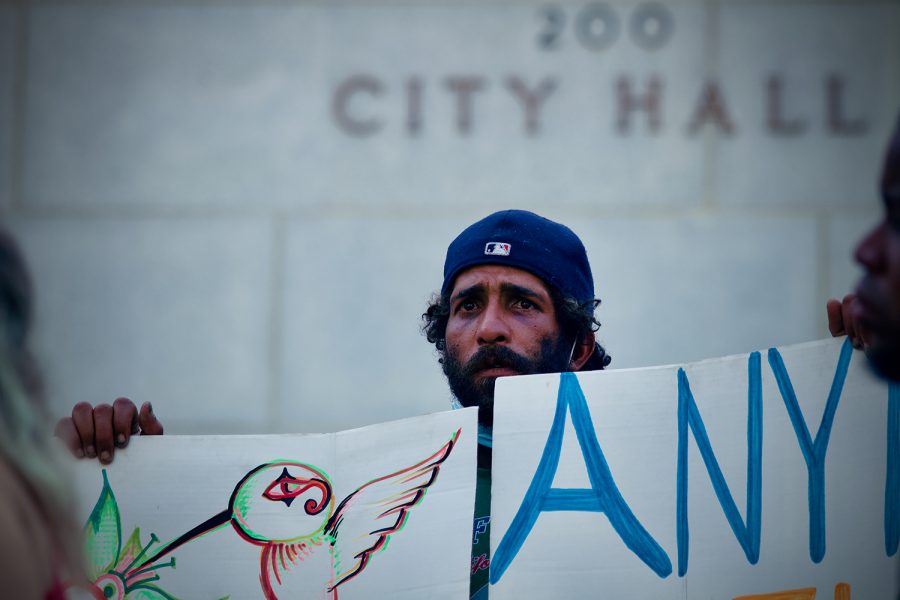 An unhoused neighbor and protester stands on the steps of Los Angeles City hall while attending a rally in opposition of a proposed motion to amend LA Municipal Code 41.18 in Downtown Los Angeles, Calif. on Wednesday, July 28 2021. As demonstrations continued LA Council Members voted in favor of the amendment, which aims to criminalize individuals who sit, lie or sleep on public property within specified times and locations; including up to 500 feet of a designated overpass, underpass, freeway ramp, tunnel or bridge.

On July 28, the Los Angeles City Council voted on a motion to amend Municipal Code section 41.18, which aims to criminalize individuals who sit, lie or sleep on public property within specified times and locations.

In response, protesters took to the steps of City Hall in downtown L.A. as the morning began with both housed and unhoused folks standing side-by-side in opposition, arguing that the motion will place the city’s most vulnerable population in further danger and perpetuate an increase in targeted violence toward the unhoused.

The rally was led by a coalition of mutual aid organizations and featured speakers from Unhoused Tenants Against Carceral Housing, We the Unhoused, Here 2 Stay Campaign, Hillside Villa Tenants Association, J-Town Action and Solidarity, and more. It gave a platform to activists as well as individuals who are currently experiencing housing insecurity to share their stories.

In a two-hour call to action, speakers collectively demanded the city shift focus from displacement to sustainable long term housing solutions and delivered emotionally-charged speeches aimed to highlight the human aspect of homelessness.

Rene Alexander of the Hillside Villa Tenants Association spoke through tears as he shared his reaction to reading the proposed motion.

“I know that they don’t know what it’s like to be homeless. I do,” Alexander said. “First time I was homeless was when I was 12 years old. I was a 12-year-old boy living on the streets in Hollywood on my own.”

While Alexander has now been a Hillside Villa resident for 19 years, he has been homeless on and off throughout his life.

“People say ‘Get a job, man,’” Alexander said. “When I went to get a job as a homeless person I didn’t have the clothes, I didn’t look clean. No one was going to hire me.”

Theo Henderson, an unhoused community member, also served as a guest speaker. Henderson hosts a podcast called “We the Unhoused,” which invites members of the unhoused community to discuss their day-to-day struggles as they navigate housing insecurity.

On the steps of City Hall, Henderson addressed the imbalance of wage and cost of living in L.A.

“Do you know how many people I know work 40 hour weeks and go sleep in a tent?” Henderson asked.

According to Los Angeles Homeless Services Authority’s annual homeless count, more than 60,000 people in L.A. County are currently experiencing homelessness — up 12.7% from 2019. Amid the backdrop of the COVID-19 pandemic, many Angelenos are on the brink of homelessness and are living paycheck to paycheck.

Around noon, protesters took to the streets, stopping traffic on First and Main streets in the heart of L.A., with the exception of city busses, which commonly carry the city’s working class.

By the end of the day, Municipal Ordinance section 41.18 was passed by the L.A. City Council 13-2 and approved by Mayor Eric Garcetti the following day.

The approval comes as the city’s initiative to provide reliable solutions are failing. Project Room Key, a program designed to help the unhoused community, currently houses less than 3,000 people, according to the Los Angeles Times.

With Garcetti’s recent approval of evictions of the unhoused at Echo Park Lake in March and Venice Beach in July, along with last week’s impromptu removal of hand-washing stations and public restrooms at encampments across L.A. amid the aggressive Delta variant, activists are calling on all to fight back.

Steven Chun, an activist and organizer with J-Town Action and Solidarity and Ktown For All, addressed the crowd at Wednesday’s rally.

“People are on the streets because of the failure of city officials to provide the bare necessities,” Chun said. “The basics of affordable housing and other services … we will not stand by and watch as the city launches attack after attack on our unhoused neighbors … All power to the people.”

With the upcoming 2022 elections approaching, activists are calling on communities to elect progressive leaders into office. Many local grassroots political candidates have publicly stood in solidarity with the unhoused.

Among those in attendance at Wednesday’s rally were L.A. City Council candidates Yasmine Pomeroy and Dulce Vasquez, along with California Congressional candidate Shervin Aazami.

“They have passed a motion to essentially make it illegal for unhoused folks to sit, sleep, or lie in public spaces … We must change the narrative,” Pomeroy said on an Instagram post. “We must invest in our communities, especially our most vulnerable. We cannot heal until we care for those who need the most help.”

The municipal ordinance will go into effect 30 days after Garcetti’s July 29 approval.