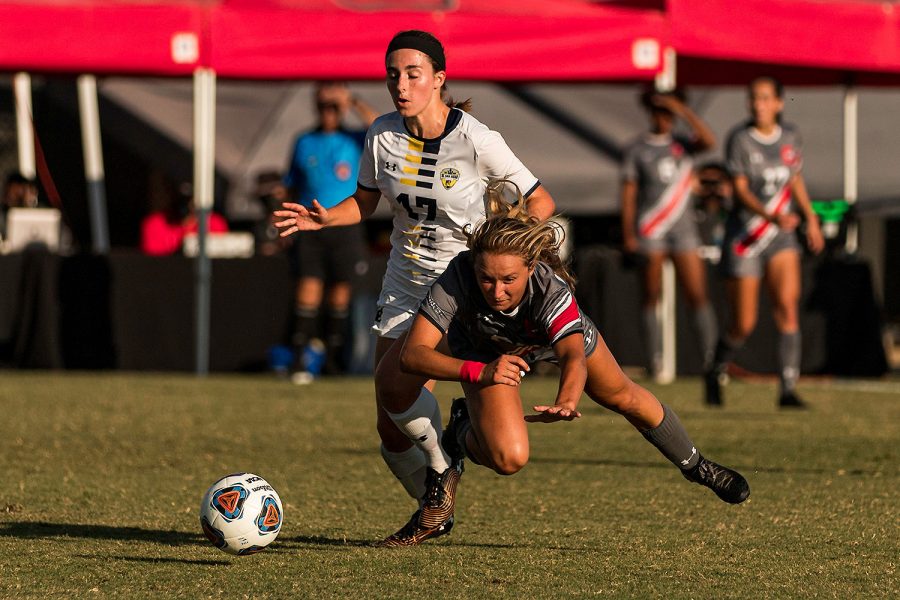 Brooke Mobeck, right, gets tripped up by a UCSD Triton defender during their match at the Performance Field in Northridge, Calif. on Wednesday, Sept. 16, 2021.

Back from playing six non-conference league games away from home, CSUN women’s soccer returned home after 24 days and faced UC San Diego on Thursday for the first time in women’s soccer history.

Away side UCSD found a way to come out victorious 2-1 against the Matadors as they never seem to put their foot off the pedal.

The Matadors began the game on the right track by measuring the press that would come from the opposition. They sought to use the wings to their advantage.

Nine minutes into the game, a foul from midfielder Kimberly Anderson inside the penalty box saw the referee award UCSD a penalty.

“I was pretty pissed off after they scored that goal,” said freshman Christiane Sundstrom. “I tried to bring some energy into the field and once I saw that ball being played down the line I just went with it and crossed it — thankfully [midfielder Cora Willcot] was there to make something beautiful.”

After going down early, CSUN shifted gears adding more people into the attack.

Sundstrom, who plays as a forward, found spaces on the wing and waited for the right moment to deliver.

It was Willcot who jumped the highest to find Sundstrom’s cross inside the box in the 28th minute.

“Scoring that goal felt amazing,” said Willcot. “It was unfortunate we didn’t get the result, but there will be more where that came from. I’m excited and look forward to it.”

@CSUNWSoccer substitute Cora Willcot scores a header in the 28th minute to level it 1-1 for the Matadors vs UC San Diego.

With 10 minutes left in the second half, Sundstrom, with her weaker foot, once again found an opportunity on the wing, sent a cross into the box, but this time there was no teammate to finish the play.

For UCSD, forward Kennedy Carter’s penalty in the first half gave the Tritons the winning goal right before the hour mark, which came from a pass over the top of the right side by midfielder Michelle Baddour.

CSUN goalkeeper freshman Elizabeth Bornhauser was busy between the goalposts with six key saves that kept the possibility of finding the game tying goal for the Matadors.

In the non-conference league, CSUN has faced three top-25 ranked teams this season, including nationally-ranked Stanford University, nationally-ranked Arizona State and five of eight opponents thus far have come from Power Five conferences, according to GoMatadors.

The return rematch for the two Big West Conference teams will be on Oct. 3 at UCSD in La Jolla.

The Matadors are now 1-8-0 overall with the Big West Conference soon to begin after their match away against USC on Sept. 19.