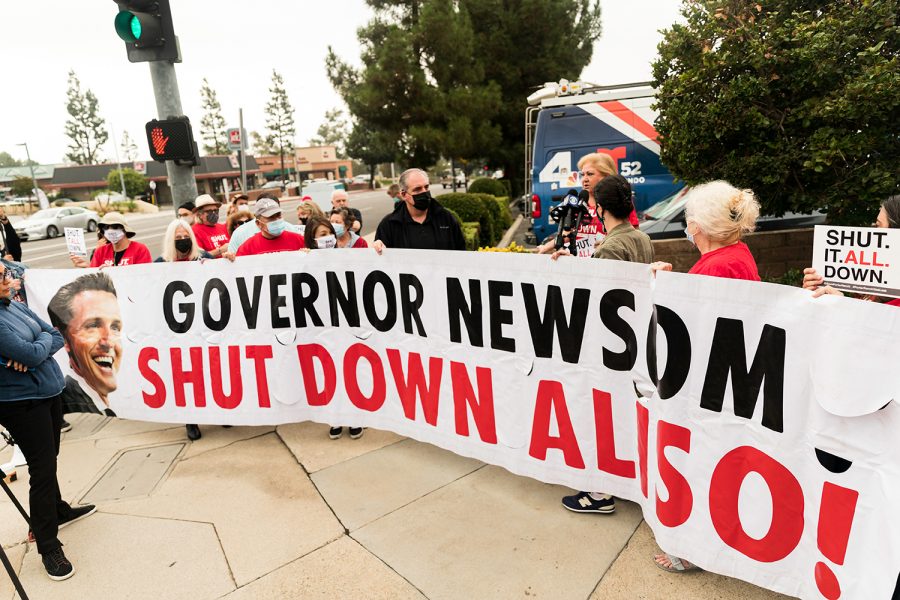 Protesters give comments to the media while holding a banner demanding Gov. Gavin Newsom to shut down the Aliso Canyon gas storage facility in Porter Ranch, Calif., on Tuesday, Sept. 28, 2021.

About two dozen members of the nonprofit organization Save Porter Ranch gathered at the intersection of Tampa Avenue and Rinaldi Street in Porter Ranch Tuesday morning to call for Gov. Gavin Newsom to shut down the Aliso Canyon gas storage facility.

The call to action was sparked from the announcement that the Southern California Gas Company and its parent company, Sempra Energy, agreed to pay $1.8 billion to settle claims from more than 35,000 plaintiffs affected by the Aliso Canyon gas leak that occurred in October 2015.

“Let’s do the simple math. $1.8 billion divided by 35,000 plaintiffs minus attorneys fees and expenses comes out to about $28,000 per person,” said Matt Pakucko, the president of Save Porter Ranch.

A settlement has not yet been reached because it requires 97% of the plaintiffs to accept it in order for it to be finalized. If an agreement cannot be finalized, the case will go to trial, according to attorney Brian Panish.

During the demonstration, the protesters broke out in chants repeating “go to trial” and “shut it down.”

“Does $28,000 cover [the medical expenses] for the rest of our lives being health monitored because of the ongoing issues?” asked Pakucko. “It doesn’t even come close.”

Both SoCalGas and Sempra have denied wrongdoing, according to the Los Angeles Daily News.

Alexandra Nagy, the California director of the grassroots organization Food & Water Watch, said although residents are concerned about not getting enough in reimbursements, they have not lost sight of the bigger goal in getting the Aliso Canyon gas facility shut down permanently.

“Gov. Newsom is the one with the power and responsibility to close Aliso Canyon down,” Nagy said. “We need your help to put pressure on him and hold him accountable to his promise.”