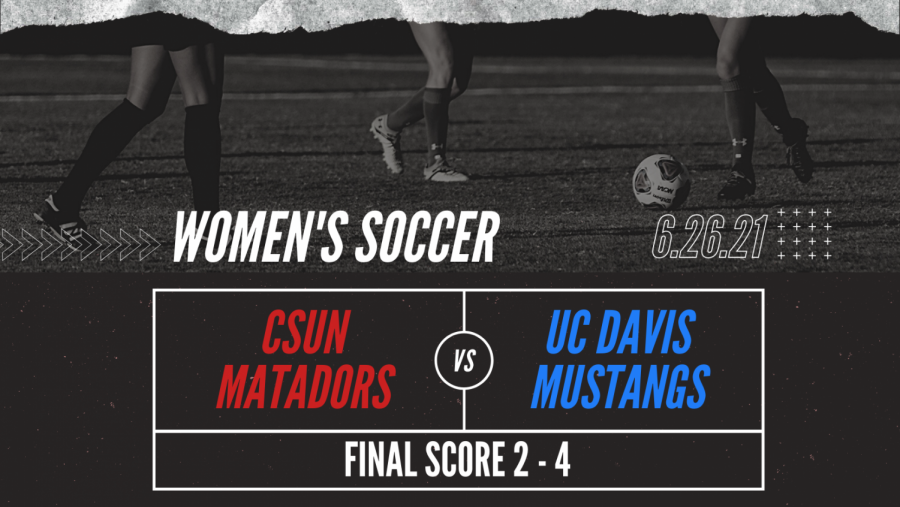 Despite some confident playing from the CSUN women’s soccer team, the Matadors took their first conference loss in their Sunday matchup against University of California, Davis 4-2.

On the heels of their win against University of Hawai’i on Thursday, the Matadors displayed remarkable skill advancing the ball up the field and maintaining solid ball control. However, it wasn’t enough to beat UC Davis’ defenders.

“We have been working at moving the ball quickly and I think we did that very well,” CSUN assistant coach Christine Johnson said. A self-evident statement as the women’s team moved quickly and aggressively, attempting their first shot before the first-minute mark.

Goalkeeper Elizabeth Bornhauser held her own over the 90 minutes, blocking multiple goal attempts and racking up seven saves. With each of Bornhauser’s saves, the crowd — including the men’s soccer team, who was in attendance supporting their fellow college athletes — exploded with excitement.

Sharing the frustration of the fans, Johnson remarked, “For some reason, we were very attracted to the post today. It was just unfortunate for us.”

Both teams came out of halftime in full force, with CSUN defender Gabriela Robles scoring the first goal of the game — her second career goal.

“After my first career goal I was very, very excited … I just can’t believe I got two goals [in two games] in a row,” Robles said.

UC Davis would go on to make four consecutive goals before forward Christiane Sundstrom scored CSUN’s second goal of the game. UC Davis was practically given one goal, as CSUN defenders prematurely left their positions and let the opponent score unchallenged.

“I think there were moments of real brilliance, of connecting the ball and moving forward,” Robles said. “We have really good energy and I think it’s just making sure that we’re keeping it up the full 90 [minutes]. We have to make sure we’re staying mentally tough out there.”

The women’s team will have some time to recover before their next game and have already set their sights on learning and progressing.

“Everything that we’ve worked on over the course of the season, we did really well today,” Johnson said. “We’re going to work on things that we can maybe do better, and then prepare for our next opponent the best we can.”

CSUN’s next game will be on the road against University of California, San Diego on Oct. 3.