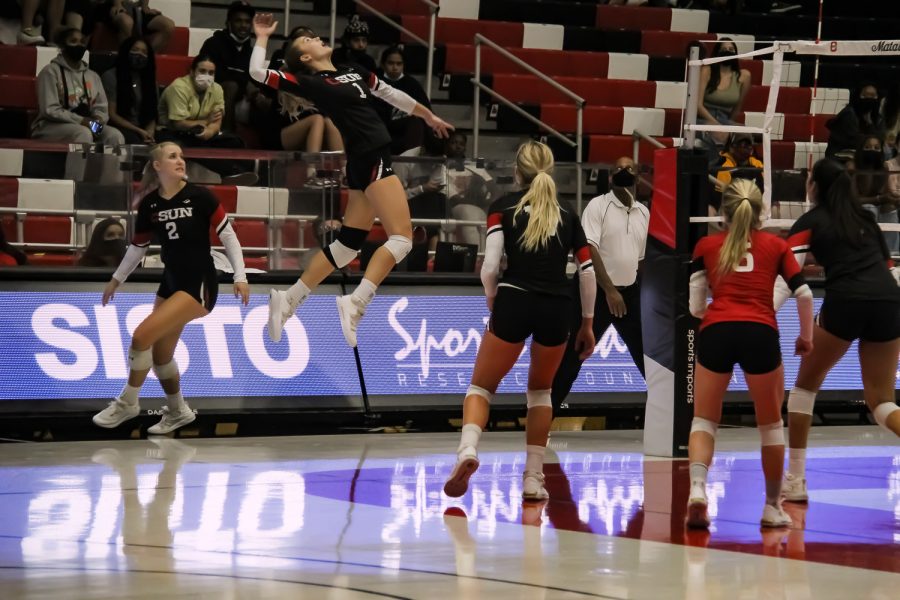 CSUN women’s volleyball failed to bring in their first Big West win of the season by losing to UC San Diego in four sets on Saturday at the Matadome.

The Matadors went on a 7-0 run off of kills from middle blocker Taylor Hunter and outside hitter Nicole Nevarez in the first set, giving CSUN a 20-13 lead. The Tritons answered with a 6-0 run themselves, giving them a 22-21 lead. The Tritons would go on to win the set 25-22.

“With a young team, when you have big leads it is harder to finish sets,” interim head coach Susie Terrusa said. “When they have big leads, they tend to let up. That’s having a young inexperienced team.”

The third set started with back-to-back aces from CSUN’s setter Carisa Barron giving them a 2-0 lead. An ace by defensive specialist Elizabeth Gannon gave the Matadors a 15-13 lead. The Matadors would go on a 5-1 run finished off by a kill from outside hitter Lexi McLeod giving them the set 25-20.

“The serve and pass game killed us a little bit,” Nevarez said. “We couldn’t get a great pass, we couldn’t convert and then when we did get the serve back, we either error-ed or it was too easy of a serve.”

The Matadors look to get their first Big West win and snap their nine-game losing streak against CSU Bakersfield on Friday.