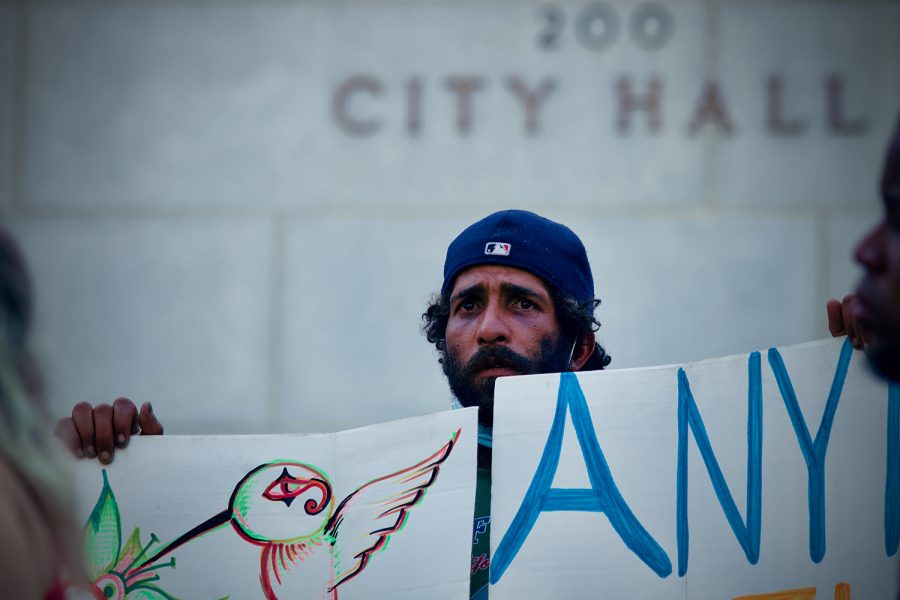 An unhoused neighbor and protester stands on the steps of Los Angeles City hall while attending a rally in opposition of a proposed motion to amend LA Municipal Code 41.18 in Downtown Los Angeles, Calif. on Wednesday, July 28 2021. As demonstrations continued LA Council Members voted in favor of the amendment, which aims to criminalize individuals who sit, lie or sleep on public property within specified times and locations; including up to 500 feet of a designated overpass, underpass, freeway ramp, tunnel or bridge.

In the wake of the coronavirus pandemic, Los Angeles’s already significant unhoused population skyrocketed due to a devastating combination of turbulent financial hardships, limited housing and archaic infrastructure.

This swath of factors has ultimately revealed a series of faults within the overall outreach and relief efforts towards combating homelessness across the county. Over the course of 2020 and 2021, emergency funds and unprecedented legislation have successfully aided in temporarily improving the general response towards the health and safety of the public, with the most substantial of this legislation consisting of both a federal and state-imposed moratorium on evictions.

The moratorium on evictions arrives at a pivotal moment in the overall pandemic response towards protecting unhoused individuals across Los Angeles. Over the past year, the Los Angeles Homeless Services Authority has utilized both increased emergency funding and increased shelter capacity by over 57%, while expanding on permanent housing options by 16%, which has strongly aided authorities in their relief efforts, but it has revealed a lapse in coverage of the unhoused in L.A.

The increase in housing capacity, though substantial, is not enough to cover unhoused populations, as LAHSA has been unable to coordinate their annual surveys and population counts for 2021 due to COVID-19 limitations.

This unmeasured deficit of coverage proves to be a forthcoming challenge for the forces of renewed governmental response and coordination, as agencies like LAHSA have received substantial amounts of emergency funding as a result of the series of moratorium extensions, coupled with the bureaucratic objective of maintaining public health and safety.

Due to this lack of concrete updated data, LAHSA may not be able to allocate emergency funds in a manner that effectively addresses the needs and safety of unhoused populations across LA County.

For instance, the capacity of housing units in use since the start of the pandemic has dropped despite an overall increase in affordable housing construction, which is largely due to the enactment of social distancing and other pandemic related protocols, resulting in fewer beds in homeless shelters overall.

Fortunately, state-funded initiatives, such as Project Roomkey and Project Homekey, which aim to provide housing by purchasing hotels and other properties, have been able to successfully offset the loss in capacity of homeless shelters caused by COVID-19.

Despite these innovative programs’ success, the eviction moratorium’s expiration date still looms, ending on Sept. 30 unless extended by the Los Angeles City Council or the California State Assembly.
The eviction moratorium will inevitably expire, and will undoubtedly affect marginalized populations that stand on the thin line between housed and unhoused. The specific statistical consequences, though largely unknown, run a substantial risk of mass evictions, particularly in areas affected by a systemic fiscal disregard for affordable housing projects in areas with marginalized populations of minorities, particularly within the inner city.

With the eviction moratorium suspended in political freefall, it rests upon the community at large to participate in the conversation and outreach relief efforts in order to combat the damage of the pandemic and restore the safety of public health and housing for all.