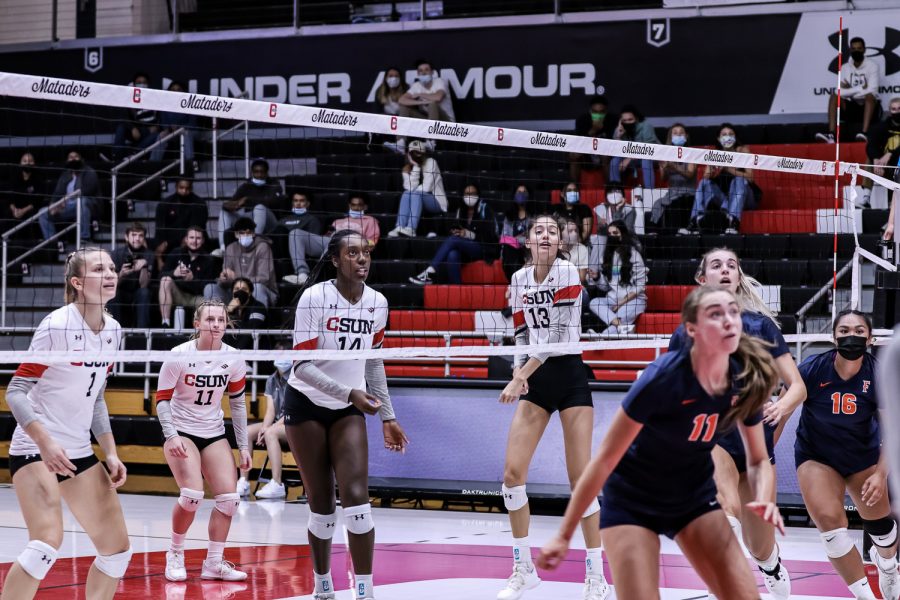 CSUN's Women's Volleyball keeps a close eye on the ball as they rally against CSUF in the Matadome on October 8, 2021 in NORTHRIDGE, Calif.

CSUN hoped to get their first home and conference win Friday, but fell short against California State University, Fullerton. The Titans were able to put on numerous runs throughout the entire game to claim a win that in the past has been dominated by the Matadors.

CSUN led the match in almost every category throughout four sets. CSUF dominated the game with the ability to put together runs and stop CSUN from going on runs themselves.

“Their runs were because of our errors, so we just talked about signing out of playing one play, one point at a time signing out and then moving forward to the next play,” CSUN’s interim head coach Susie Terrusa said.

In the second set, CSUN started like they did in the end of the first set, gaining an early 8-5 lead. CSUF went on a 5-0 run after a little tug of war and extended their lead to 22-15. CSUN bounced right back with a run of their own with help from Oshoff and middle blocker Lauryn Anderson, but fell short 25-23.

The second set was dominated by Oshoff and Anderson, who combined for half of the 23 points scored in the second set. CSUN continued to show a fight in the third set with Anderson and Oshoff playing a big part.

The third set was dominated by attack errors by both teams. CSUF put together sets of runs and gained a 19-18 lead, but CSUN would answer back with a run each time the Titans took the lead. Orshoff went on a late run of her own, scoring two of the three points that helped secure the third set winning it 25-23, but trailing the match 2-1.

CSUN got down very early in the fourth set because of a 6-0 run by CSUF. CSUN was able to build momentum throughout the set with Neveraz getting an ace, which cut the deficit to 17-15. CSUN would go on small runs but was quickly stopped by a few timeouts.

“It’s tough to lose like that especially when we came back, and then it’s so close, but we gave it our all,” Orshoff said.

CSUN looks to get their first home win Saturday against Long Beach State.