American Towns: A resurgence of live music in the Valley 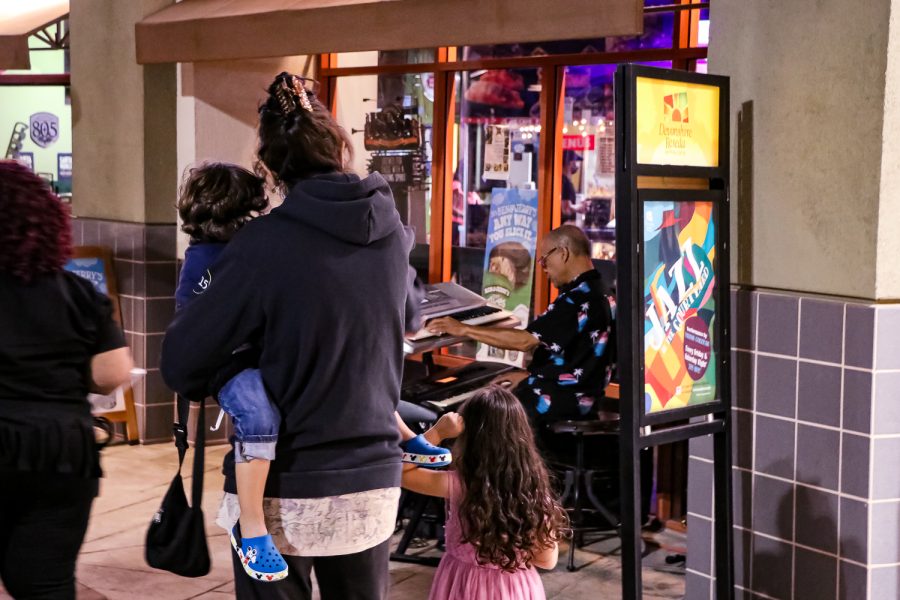 A family of three stops to watch and listen to Milton Coleman in Northridge, Calif.on Sept. 18, 2021.

In the heart of the San Fernando Valley, the commotion that takes place most Saturday nights is at the Devonshire-Reseda Shopping Center, where families are seen shuffling to grab food while performers set up their instruments. These performances mark a shift in atmosphere from a typical afternoon into a quaint, casual nightlife.

The most recent performances of the free outdoor live music series, dubbed “American Towns,” was organized by the All-American BBQ restaurant located next to the Coffee Bean and Tea Leaf. The “American Towns” series began in April 2020 and has persisted through much of the pandemic, save for brief cancellations during the second and third lockdown waves in November and December 2020.

These weekly performances in the shopping center give local businesses an opportunity to reconnect with members of the community via the universal bond shared through live music.

Due to the COVID-19 pandemic, many outdoor public music performances have been absent from the community, particularly around restaurants. Following the mass shutdown of live music venues across the world, musicians had no local in-person platforms to play their songs.

These shows give seasoned artists, like performer Milton Coleman, an opportunity to perform shows in a world that has forgotten the cultural touchstones of concerts and festivals.

“[Milton] is actually the cousin of one of our customers, Sheryl,” says Ross Azad, the general manager of All-American BBQ. “He would play other events and he’d come home and want to keep playing, so he asked us if he could play outside on Saturday nights.”

Inspired by the mid 1980s, Coleman’s setlist of smooth jazz includes music from artists like Sade, Jamiroquai and Kenny G, who gave life back to jazz and blues on the mainstream charts. His set includes songs from the artists he has worked with over the decades, such as Tina Turner and the Coleman Family Band.

Coleman’s performance unites a community that was struck with hardships over the course of the pandemic. Bi-weekly outdoor performances reappearing in Northridge is a sign of the slow rebirth of live public music performances in the Valley, which often falls underrepresented in the local restaurant music scene.

“Most places that play live music are indoors and require you to go into the restaurant, but we didn’t want any of that,” Azad said. “We wanted to have a free show and give back to the community.”

Live sets start at 7 p.m. on Fridays and Saturdays in front of the All-American BBQ Restaurant in the Devonshire-Reseda Shopping Center on the corner of Reseda Boulevard and Devonshire Street. The performances are free for members of the community.