Opinion: A proposal for a more realistic CSUN bus fleet 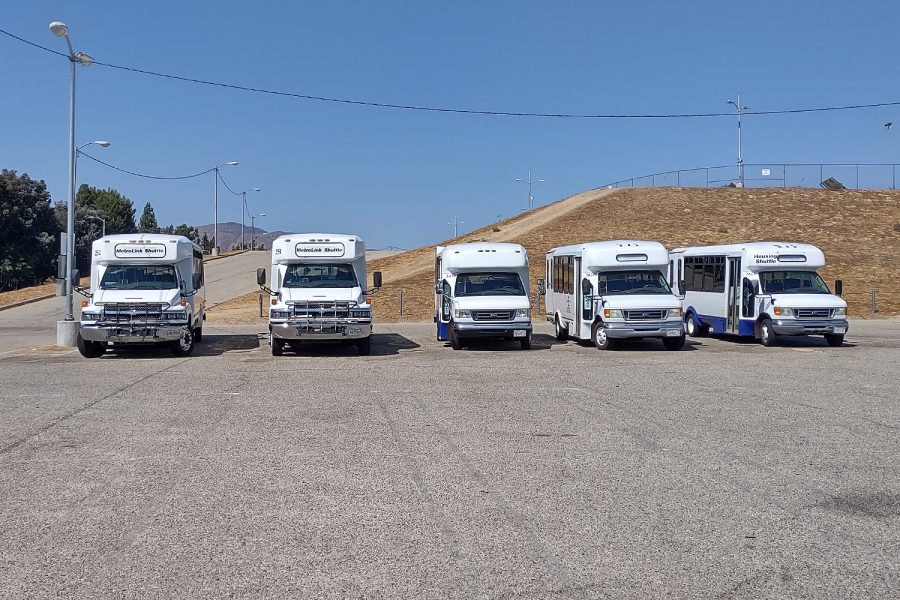 Current CSUN housing and Metrolink shuttle fleet parked in the F10 parking lot on Sunday, Sept.19, 2021. The fleet's front ends show that the vehicles are all over a decade old.

Since last writing about the CSUN bus fleet in 2019, I have analyzed the Student Housing and Residential Life, Metrolink shuttle routes and the current contracted fleet to new conclusions.

Back in 2017, I brought attention to the Housing and Metrolink shuttle bus contractor Keolis’s poor fleet upkeep and maintenance, including wheelchair lifts being out of order in direct violation of the Americans with Disabilities Act. The contract was switched from Keolis to Empire later, but the contracted bus fleet did not improve in quality under the switch.

The contracted buses under Empire are still high floors with multiple step entry and slow and clunky wheelchair lifts in decrepit shape as of now, after looking at them in detail. The Metrolink shuttle buses are actually former City of Bellflower public transit buses, meaning they have gone through a ton of abuse and the cutaway bus base used for them in the Chevy Kodiak was discontinued more than a decade ago.

The shuttle buses use 2003-2007 Ford E-Series bases which are well over a decade old. Almost all of the housing and Metrolink buses have seams coming apart as a result of their age.

This is well past the Larson Transportation Institute’s Bus Research and Testing Center’s standard service life of four to seven years for these types of new cutaway buses — making the entire fleet dangerously well past its service life in age and compounded by their construction.

Cutaways buses are built in two parts: in a base chassis supplied by an automaker, which is then sent to a second manufacturer to complete the bus. This makes a used cutaway bus past its service life an extremely dicey bet when it comes to passenger safety — when it is not built in one solid piece, compared to a purpose built transit bus.

On improving the CSUN bus fleet, I have come to the conclusion that a full sized 30-foot-long transit bus will not fit, and enroute charging is impractical and/or impossible at the two termination points on the shuttle route.

The current 24-feet-by-96-inch high floor, gas-powered cutaway van buses barely fit through the CSUN termination point at Redwood Hall. Anything longer or wider will certainly hit the building, or spill onto the grass while turning.

Accommodating such a full sized bus with enroute charging will require ripping out grass and trees planted in the immediate area, when green areas are already extremely rare in the San Fernando Valley.

The terminus is placed at the cubby-hole southwest corner of the CSUN F10 parking lot — at a diagonal where the current 24-feet-long by 96-inch-wide buses barely fit — with no straight lines for an enroute charging infrastructure.

The Metrolink shuttle, by contrast, can easily accommodate enroute charging at the CSUN transit center and Northridge Metrolink station, but the buses still need to be no longer than 32-feet-long to fit in a compact bus depot.

An electric bus without enroute charging in CSUN’s regularly extreme hot weather will be dead on arrival when electric range is severely compromised in extreme heat, especially with the air conditioning running. This will require more buses and depot charging where there is already tight space for such a fleet.

This means that a low floor cutaway van bus — despite the extreme risk of overloading that compromises safety, lifespan and reliability — is the only option for the CSUN housing shuttle.There is only one company that can make a low floor bus that both fits into the current housing shuttle route and is an electric low floor Metrolink shuttle bus — New Flyer subsidiary ARBOC Specialty Vehicles.

Their Freedom bus on the GM Chevy Express and GMC Savana 4500 cutaway is 24-feet-long and 96-inches-wide, with a hybrid option now available directly for ordering on new buses. This gas and electric hybrid cutaway van bus is significantly extended in operating range and time, while being the least likely to be overloaded due to its short length and low floor.

Their low-floor electric bus, the Equess Charge, at 30-feet-long, uses the simple direct drive with no transmission drivetrain that powers the battery electric versions of New Flyer’s top-selling flagship Xcelsior model. Both the Freedom and Equess Charge buses need automatic passenger counters installed to speed up service, eliminating the need for the driver to manually check every time passengers get on and off.

There is also a simple wireless charger by a company named WAVE that can be easily integrated into electric buses, and could potentially open up a new business customer for the company when it could tap the New Flyer product lineup across the U.S. and Canada if done for CSUN.

To reduce the emissions for the housing shuttle fleet, there is a mobile fuel delivery service that offers synthetic and biofuel gasoline for reducing the carbon footprint. They could potentially power all of CSUN’s fleet, eliminating off-campus trips to the gas station while transitioning to an increasingly mixed renewable fuel and electric fleet.

Currently, the housing shuttle Redwood Hall bus terminus goes from the vehicle driveway straight onto unstable grass and mud, which isn’t compliant under section 810.2 of the ADA accessibility standards.

Without ripping out grass and trees, there is a permeable pavement option that can be installed on top of the existing grass and mowed down to half an inch; akin to golf course fairway grass length above the cells to comply with the ADA.

With CSUN having major problems with private contractors twice during the period of 2017 to 2021, it is now time for CSUN’s housing and Metrolink shuttles to be run by the university outright — like UCLA does with BruinBus — becoming much safer, more accessible and greener in the process.