More than a jersey swap: How Mexican heritage was spotlighted at the White House 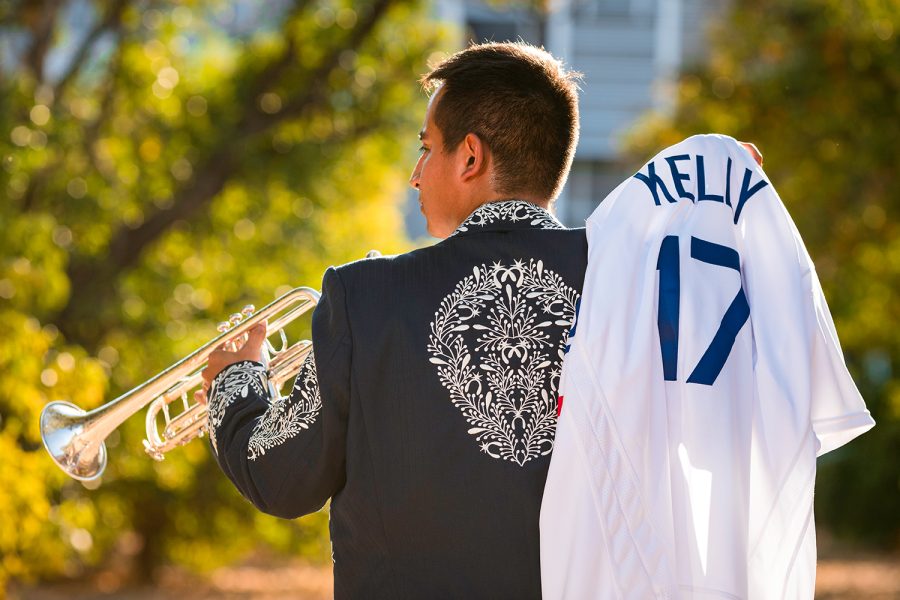 Grover Castro Tiburcio felt like his face was going to fall off.

His Saturday was spent going from backyard to backyard around Los Angeles with Mariachi Garibaldi de Jaime Cuellar, starting at 3 p.m. in West Athens and ending at midnight in East L.A. The following morning, Castro Tiburcio found himself on the field at Dodger Stadium with his bandmates.

It was so early that Castro Tiburcio didn’t even need to warm up. He was hungry. He was exhausted. He was nervous. The only thing that kept Castro Tiburcio going was his excitement to play the national anthem in front of his hometown baseball team.

“For me as an artist, as a musician, it’s one of the greatest things to be able to play the national anthem at a professional sporting event. Not a lot of people get to do it,” Castro Tiburcio said. “Just being able to play in that stadium, it was surreal.”

The day would only get more surreal for Mariachi Garibaldi as they were invited onto the field during warm ups by Dodgers closer, Kenley Jansen.

As they serenaded the Dodgers with renditions of “El Rey” and “El Sinaloense,” relief pitcher Joe Kelly approached the mariachi with a proposal. Castro Tiburcio didn’t hear what Kelly asked at first, only that he wanted one of them to participate in something. But he volunteered anyway and Kelly repeated himself.

“I’ll trade you your jacket for my jersey,” Kelly said.

Castro Tiburcio wanted to say yes at that moment, but declined because he needed his jacket to perform. Kelly understood, but told him he would be in the bullpen if he changed his mind.

Castro Tiburcio went home that night, talked with his family about it, and they all told him the same thing: “Por que no lo hiciste?”

His mom, sister and uncle couldn’t fathom why he didn’t make the trade happen. His sister later told him, “You should just do it.” Castro Tiburcio slept on it and made a few calls the next morning.

He had to make sure a replacement jacket was available so he wouldn’t miss any gigs, which was easier said than done since charro jackets need to be custom made. The supplier in Tijuana wasn’t sure if he still had the material and design, but Castro Tiburcio ended up borrowing the jacket of a former mariachi bandmate.

With his replacement secure, Castro bought tickets to the Dodger game the next day, grabbed his jacket, and headed out the door. He had no plan. He was just going to wait by the bullpen until Kelly showed up and hoped he would remember him from the day before.

“You brought it back man,” Kelly is seen telling Castro Tiburcio in a Tik Tok that went viral with over 294,000 likes and 3,800 shares.

@groverrodrigoGot to be part of an awesome moment with @mgarijc and @dodgers pitcher Joe Kelly! Check out what I traded my mariachi jacket for! ?? original sound – Grover Castro Tiburcio

Kelly smiled as he returned with his jersey in hand and they made the switch.

Castro Tiburcio jokingly told his sister as they left the game that it would be cool if Kelly wore the jacket to a postgame press conference or as a pre-game outfit. Later that week, however, the jacket would take on a life of its own for the 24-year old CSUN alumni.

The Dodgers visited the White House that Friday to commemorate their 2020 World Series championship win with President Joe Biden. It’s an occasion where the players would show up dressed in formal attire, but Kelly stole the show with one part of his fit: Castro Tiburcio’s charro jacket.

JOE KELLY IS WEARING THE MARIACHI JACKET TO THE WHITE HOUSE ???? pic.twitter.com/a2eZgwHt3M

For many Mexican Dodger fans who saw Joe Kelly’s outfit, it quickly became something bigger. The charro jacket, traditionally used by mariachi musicians, has evolved through the past century to become an icon of Mexican culture. It is synonymous with mariachi, and therefore it became synonymous with Mexico as well.

For many Mexican Dodger fans, Kelly wearing the jacket at the White House became a proud moment to just appreciate being Mexican.

“That traje was just touring around L.A. on a Saturday night in backyards,” Castro Tiburcio said. “And for it to be standing in front of the Abraham Lincoln portrait? Dude, that is insane.”

It was especially poetic to see someone from the Dodgers lifting up Mexican culture, considering the Dodgers arrived in Los Angeles by displacing the Chicano communities of La Loma, Palo Verde and Bishop to make way for what would later become Dodger Stadium.

For Castro Tiburcio, it was just a jersey swap. But for countless Mexicans living in L.A., it just meant so much more. That deeper meaning didn’t really settle into Castro Tiburcio’s mind until later, but it’s significance was far from lost on him.

“60 years ago, people were being forced out of their homes,” he said. “And here we are talking about a jacket that made it to the White House that was exchanged on the grounds of the homes of these people. I don’t know where to place myself in that, man. I get chills just thinking about it.”