CSUN Police Department: A look into its history and where it stands today 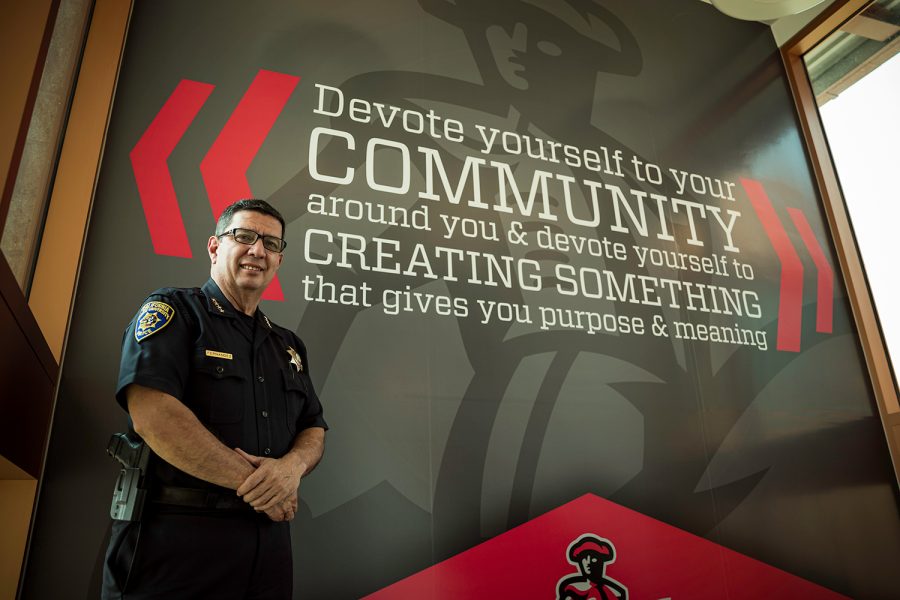 Alfredo Fernandez, the interim Chief of Police at CSUN, stands in front of a mural in the Police Services building. The words on the mural say "Devote yourself to your community around you & devote yourself to creating something that give you purpose & meaning."

CSUN’s Department of Police Services, the official name of the CSUN campus police department, has come a long way from its early roots in 1958 when CSUN was known as San Fernando Valley State College. That year the college welcomed over 2,500 students, and classes took place in portable classrooms due to construction.

The police department operated in a temporary mechanical room along Lindley Avenue. Due to lack of equipment, campus police would communicate with the sound of a steam whistle — a high-pitched sound created by active steam. Officers drove in used patrol cars purchased from the California Highway Patrol. Despite having limited equipment and little training, officers remained armed, according to the department’s history.

Today, the DPS is a fully-fledged police agency.

Department of Police Services
Today, the DPS is located in a 26,000 square foot state-of-the-art building on Prairie Avenue and Darby Street. Other than police operations, which includes the Matador Patrol and K-9 units, the agency manages Police Administrative Services, and Parking and Transportation Services.

The DPS is accredited by the International Association of Campus Law Enforcement Administrators, the largest professional association devoted to excellence in campus public safety. The accreditation proves that DPS meets professional standards in protective services in an on-campus setting.

The department currently has 16 sworn officers. While the DPS has Latino/a officers, it isn’t diverse because it lacks female and African American officers.

In Jan. 2019, Murphy was appointed chief of police at CSUN. Earlier this summer, Murphy took the acting chief of police position at the University of California, San Diego, a campus he served before coming to CSUN.

Chief Alfredo B. Fernandez currently holds the interim chief of police title until the appointment of a permanent police chief. Fernandez has been with the DPS since 1998 and is known for introducing the K-9 units on campus.

The DPS patrols the campus and surrounding neighborhoods within a one-mile radius. According to Fernandez, the station shares jurisdiction with the Devonshire Community Police Station, located about two miles north of campus.

The DPS has a budget of about $2.3 million that comes from the general operating funds for the campus. Those funds cover salaries, maintenance, equipment and information technology within the department.

Crimes on Campus
The most common crime on campus is theft. The theft of bicycles and unattended items are the most foreseen crimes. The DPS website suggests that students and staff register their bikes and valuable electronics for a higher chance of recovery.

The most serious crimes to occur on campus are sexual assault and stalking. According to the 2021 Annual Security Report, there were nine reported rapes and zero cases of stalking in 2020. Compared to 2019, the report recorded 11 rapes and 23 stalking cases. The DPS works closely with the Klotz Student Health Center and University Counseling Services when dealing with calls of this nature.

On the department’s website, crime information is published on the Daily Crime Log, a log in which all criminal activity in a college campus must be recorded as stated in the Clery Act of 1990.

Overall, Fernandez considers CSUN a safe environment. “We do a good job in keeping the campus relatively safe, but you know CSUN does not exist in a bubble,” Fernandez said.

However, according to a 2020 report from the National Council for Home Safety and Security, CSUN ranked 470th in the nation’s safest college campuses out of 490 colleges surveyed. When narrowed down to the 23 CSU campuses, CSUN is ranked 20th.

DPS and the CSUN Community
In the last couple of years, law enforcement agencies have faced backlash due to the increase of police brutality events across the country. Protesters have gathered on streets and college campuses demanding the defunding and abolishment of police.

In October 2020, student organizations gathered outside the DPS to protest their views on campus police. Among these student organizations were the Youth Justice Coalition Los Angeles, Movimiento Estudiantil Chicanx de Aztlan, and Students for Quality Education. These groups and other attendees expressed how campus police made them feel unsafe. They also demanded that policing be removed from college campuses.

Fernandez disagrees and believes the relationship between the DPS and CSUN is amicable. “I think that people recognize the value that the police department brings, but again I know there are people who feel that way,” Fernandez said. “But I think for the most part the CSUN community is supportive of its police.”