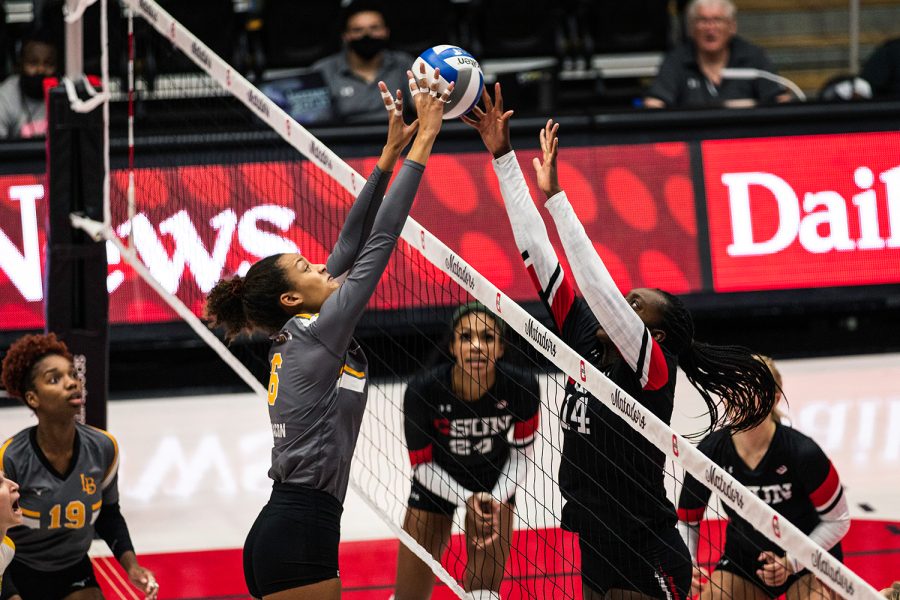 Kameron Bacon, left, and Taylor Hunter contest each other at the net during the first set of the match between CSUN and Long Beach State at the Matadome in Northridge, Calif., on Saturday, Oct. 9, 2021. CSUN lost to Long Beach State in four sets.

CSUN traveled to UC Santa Barbara on Tuesday, hoping to get their third straight Big West conference win. The Matadors did not succeed as they lost in three sets.

The Matadors took the lead 7-5 later in the set after a kill by middle blocker Taylor Hunter, followed by a Gauchos 3-0 run that put them up to 8-7. The set was even at 10 after a block from UCSB’s outside hitter Michelle Ohwobete.

CSUN took a 4-2 lead early, with two of the four points coming from outside hitter Nicole Nevarez. The team had a 9-5 lead in the set after a kill from outside hitter Lexi McLeod, but a 3-0 run by UCSB brought them within one. Gauchos middle blocker Rowan Ennis aced to tie the score at 10 apiece.

A 4-0 run by UCSB put them up 14-11, with three of the four points coming from middle blocker Deni Wilson. CSUN had a 4-0 run of their own later in the set, giving them a 17-16 lead that forced a Gauchos timeout. CSUN brought the score to a tie at 21 after a kill from Orshoff, but UCSB scored the last four points, giving them a 25-21 win in the set.

CSUN’s only lead of the final set was the 1-0 opening, which came after an attacking error from Gauchos’ Ohwobete. CSUN brought the set within two (13-11), but a 7-0 run by the Gauchos gave them a 20-11 commanding lead. UCSB took the final set and the 25-15 win after a kill by libero Macall Peed.

CSUN is now 3-6 in Big West Conference play and 4-15 overall, with two of the three conference wins coming from this three-game road trip.

“That’s a tough road trip,” said CSUN interim head coach Susie Terrusa. “Going from Davis to Riverside and then up to here [Santa Barabara], so I was happy with how the girls played tonight, we just couldn’t stop them. They had a good offense, a lot of good hitters and we just couldn’t defend or stop them with our blocks.”

The Matadors look to get their fourth Big West Conference win on Saturday as they return home to host the University of Hawai’i.